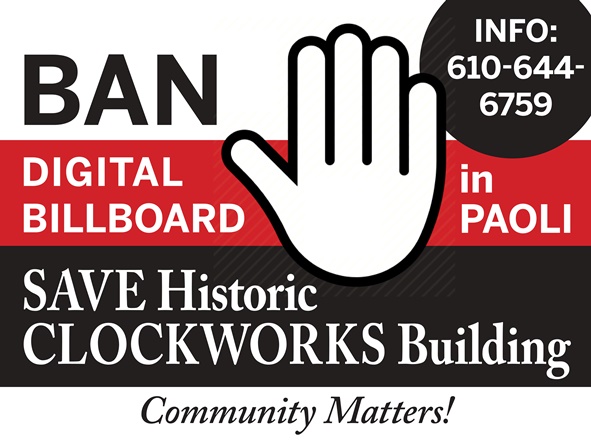 Thank you to the many residents who filled the seats of the township building or stood in the back of Keene Hall last night for the Zoning Hearing Board meeting. Thank you to the many residents who last night (and at the two previous Zoning Hearing Board meetings) eloquently delivered their message of “Just Say No” to a digital billboard at the intersection of Rt. 252 and Lancaster Avenue in Paoli.

As I said last night, I have lived here for many years and am engaged in community issues. There are always at least two sides to any of these issues, with the ultimate outcome producing winners and losers. Not so on the digital billboard, we are not divided; there is only one side. Since August 2018, I have spoken to many people on this topic and have yet to find a resident who supports the idea of digital billboard in the middle of Paoli or who thinks it’s a good idea.

As Catalyst Outdoor Advertising attorney John Snyder and the township attorney Tony Verwey had both rested their cases at the July 25 meeting of the Zoning Hearing Board, the special 6 PM meeting last night was dedicated to residents’ comments on the proposed digital billboard. And speak they did, a steady stream of residents speaking out against the proposed billboard, just as other residents had done at the two previous Zoning Hearing Board meetings. Many residents spoke at these three meetings and not one voice of support for the proposed billboard. An important community issue, it was however sad to note that not a single township supervisor attended the meeting last night.

So where do we go from here? After much discussion between the Zoning Hearing Board members, its solicitor and attorneys from the township and Catalyst Outdoor Advertising, a timeline for legal responses from both sides was established. Much of this discussion was difficult to follow but at the end, I asked two questions for clarification; (1) when would the residents who sought ‘party status’ know if it was granted and (2) when would the Zoning Hearing Board make their final determination.

As I said last night to the members of the Zoning Hearing Board, the final decision rests with them– the township heard the public and denied the application for the digital billboard and it’s now up to them to uphold and support. The public has spoken … this is not a community divided!