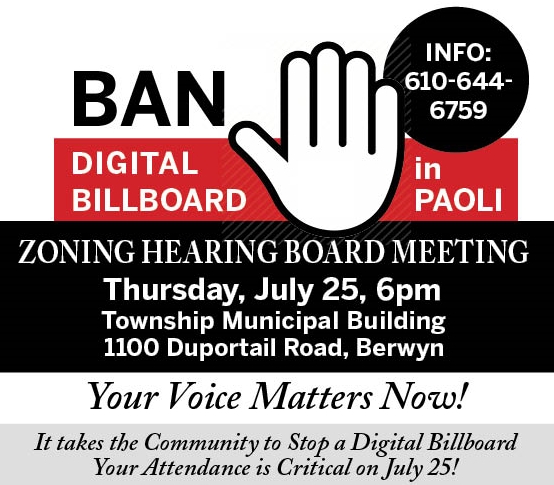 To members of our community – On Thursday, July 25 at 6 PM at the Tredyffrin Township municipal building, we have one last opportunity to make our voices heard regarding the proposed digital billboard at the intersection of Rt. 252 and Lancaster Avenue in Paoli.

Catalyst Outdoor Advertising first appeared at a Tredyffrin Township Board of Supervisors meeting in August 2018 with their proposal to demolish the Clockworks Building and install two large 20 ft. digital billboards with a reflecting pool as a “welcome” to our 300-year old township. For many reasons during the last eleven months, the public has remained committed in their opposition.

The starting point for the digital billboard project was Catalyst’s submission of two applications to the township in December 2018 – (1) a demolition permit application for the Clockworks building and (2) an application to digitize the existing small stationary sign. To the credit of our elected officials and township staff, the public’s opposition was heard and both applications were denied

Undeterred by the denial of their applications, in early 2019, Catalyst appealed the township’s decision on the digital billboard application to the township Zoning Hearing Board. The ZHB heard three hours of testimony on May 30, primarily from the Catalyst attorney. The legal proceeding was continued to July 9 for another lengthy evening of argument from the township attorney in front of the ZHB.

With Catalyst and the township attorneys resting their cases – it’s now up to us, the public! The last Zoning Hearing Board meeting is dedicated to public comment on the digital billboard application. This is it folks, our voices will be the last words heard by the Zoning Hearing Board

Far from dividing, the digital billboard issue has united the community in its opposition. I am proud of our residents — they have put lawn signs up, shared information, done their own digital billboard research, attended and spoken out at meetings. We have one more opportunity to deliver our message of opposition on Thursday, July 25, 6 PM and we need standing-room only!

PLEASE SHARE THIS POST with Friends, neighbors, family – the end is in sight and we need to deliver our FINAL voice of Opposition!!