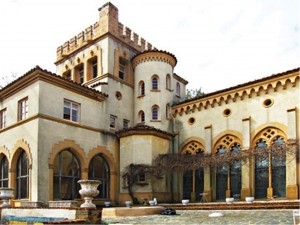 La Ronda was an extraordinary and unique house in Villanova that was variously described as Spanish Revival or Castilian Gothic. Built in 1929 by flamboyant architect Addison Mizner for industrialist Percival Foerderer, its National Register nomination described it as including “51 rooms, 21 of which were bedrooms, Spanish towers, Gothic porticos, Venetian stained glass, Italianate monastery cloisters, and European formal gardens.” After a lengthy and costly battle to save La Ronda, the magnificent structure was demolished in October 2009.

Strafford resident and architectural historian James B. Garrison will be at historic Duportail House in Chesterbrook on Wednesday, April 14 as guest speaker of the Trust’s Spring Lecture Series. Mr. Garrison’s lecture on La Ronda will include a slide presentation which will offer a last glimpse of the house and gardens, as well as discussing some of the preservation issues related to the remaining unique residential properties on the Main Line. A reception will begin at 7 PM followed by lecture at 7:30 PM. Lecture admission is $15 and all proceeds go toward Tredyffrin Historic Preservation Trust’s rebuilding effort of the Jones Log Barn at the DuPortail House location. Visit Trust’s website, www.tredyffrinhistory.org for further information or click here Spring Lecture 10 – Garrison Press Release for press release.

La Ronda represented a valuable historic treasure in the community and this lecture provides an opportunity to remember its significance. Save Ardmore Coalition documented the final days of La Ronda on YouTube; click here to view.

For purposes of full disclosure, I am Tredyffrin Historic Preservation Trust’s president. We live in a historic community and I would encourage your to attend this lecture and show your support for preserving and protecting our historic resources.