I decided to drive over to Mt. Pleasant yesterday to check on the progress of the demolition at the Henry Ave. development. A week ago, Maizie Hall’s house was taken down but there remained a pile of debris along with 3 other vacant, abandoned houses. I posted photos of the remaining houses and the trash so I was anxious to see what (if any) progress had been made. 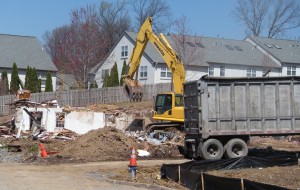 As I drove down Henry Ave. was I ever surprised! The 2 abandoned houses on the corner of Fairview and Henry Avenues were already down and all debris cleared from those houses in addition to complete clean-up of Maizie Hall’s house. And the demolition crew were about 75% finished with the demolition on the remaining house. Such an improvement to what had been there a week ago! 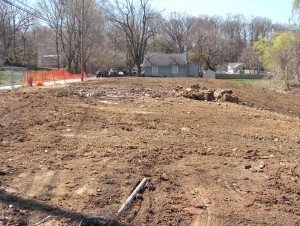 I talked to the two members of the demolition crew who looked to be in charge; I was amazed that neither asked me who I was or why I was taking photos. They were only too happy to answer my questions and could not have been nicer. I was told that all demo and clean-up work would be completed today. On Monday, they will start the land development part of the construction which includes levelling of the land and laying underground utilities.
I told them that I had heard that there might be financial issues with the developer — I asked if that information was true; and if so would finances slow down the development schedule. I was told that information is inaccurate. Not only is the development project moving ahead, I was told that 2 of the townhouses have already been sold (pre-construction sale) and house sales will push the project more quickly. Although they were not completely sure of the pricing on the townhouses; they agreed that my suggested price tag of $300K was probably about right and in the ballpark.
I’m thrilled that in 1-1/2 weeks Mt. Pleasant went from 4 abandoned, empty houses, that were causing me safety concerns for the neighborhood kids, to complete demolition and clean-up. Maybe pictures do speak louder than words! The demolition guys also told me they heard that someone in the township was driving the clean-up. Hmm. . . ? I love it when the system works! The vacant lot is next on my agenda for clean-up in Mt. Pleasant.
Share or Like:
← Previous Post
Next Post →