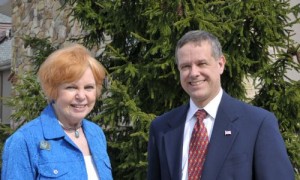 I received the following press release from Ken Buckwalter announcing that Carole Rubley is endorsing him for PA State House 157.

“I respect his work ethic, his strong commitment to the community.”

Rubley said, “I have known Ken for many years. I respect his work ethic, his strong commitment to the community, and his faithful observance to our Constitution. I strongly support his candidacy for State Representative. Ken is a man of principle and integrity who stands up for the Rule of Law. He can be counted on to work fulltime for the citizens of the 157th District.”

Buckwalter, a business owner and member of Phoenixville Borough Council, said, “I’m honored to have the support of Carole Rubley. She faithfully represented our district in Harrisburg. She is a respected member of our community and I appreciate her help and her support.”

Buckwalter is running in the May 18, 2010, Republican Primary for the position. He is a recommended candidate by the Republican Committee of Chester County.

“I’m looking forward to representing the district,” Buckwalter said. “As a Councilman for eight years I’ve compiled a record of protecting taxpayers. I look to cut government programs that waste tax dollars. As a business owner for 36 years, I know the value of a dollar. I’m a businessman, not a career politician.”

Buckwalter is also a defender of the Pennsylvania Constitution. As a councilman, he filed a lawsuit when he believed council was violating a provision of the Constitution. “I took an oath to uphold the Constitution. I believe in the founding principles of this country and I had a duty to challenge a violation of our laws. The Supreme Court of Pennsylvania unanimously upheld my view.” Buckwalter has also served his community as a volunteer firefighter and being a foster parent.