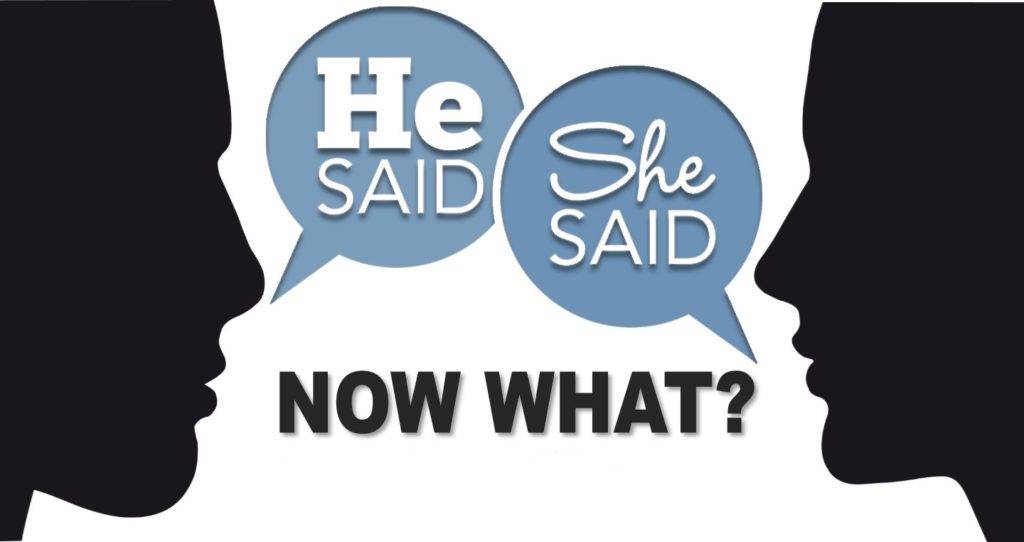 “He Said, She Said – What’s Next” says it all! There continues to be accusations of misinformation and confusion surrounding the T/E School District’s 60-day resignation policy and how this regulation affects the Region II School Director race between candidates Doug Anestad (R) and Kyle Boyer (D).

Local municipal races are important and facts do matter! On October 12, chair of the Tredyffrin Republican Committee Neill Kling provided an opinion on the PA State Law in regards to the 60-day resignation policy. On October 17, the post was updated to include subsequent responses from candidate Doug Anestad (R) and Kathleen Keohane, chair of the Tredyffrin Township Democratic Committee. In addition to their responses, I sent a personal email to candidate Kyle Boyer (D) inviting him to clarify his position and to ‘set the record straight’ on any inaccuracies. To date, Mr. Boyer has offered no further information nor responded to my email.

After reviewing TTDEMS chair Kathleen Keohane’ response dated October 17, Mr. Anestad believes it contains erroneous information and has sent a follow-up response. Rather than update the original post with this new information, below you will find Kathleen’s response followed by Doug’s.

Again, I need to ask where is Kyle Boyer? He’s the T/E School District school teacher running for the District’s school board. I understand that Mr. Boyer may not want to respond “on a blog” but isn’t the public entitled to some answers before Election Day?

Based on Mr. Anestad’s review (below) of the PA State Law, T/E School District policy and professional employment contract, it appears that there could be repercussions for Mr. Boyer if he were win the Region II School Director race. So … for any voters which be further confused by the “He Said, She Said” narrative, I suggest contacting Dr. Rich Guisick, the T/E School District Superintendent at gusickr@tesd.net.

Once again it is political season and some members of our community have sought to infuse false narratives into a local school board race that should be non-partisan and focused on the issues. Posted as a blog statement, last Thursday’s letter from Neill Kling, chair of the Tredyffrin Township Republican Committee, calls into question Democratic school board candidate Kyle Boyer’s fitness to serve. Neill chose not to post this letter on his party’s website or in a letter to the editor but on a local blog, which allows for anonymous comments.

All voters should continue to focus on the facts:

Kyle Boyer is fully entitled to run for T/E school board as a resident of the district. He is aware of and appreciates the requirement that he resign his teaching position and leave the district if and when he is elected on November 7, and is fully prepared to do so. As for the 60-day provision in the PA Code, it gives districts the latitude to hold teachers for sixty days. However, there is solid precedent that the T/E school district has released professional staff with much less notice.

The District will accept, without prejudice, the resignation of any employee provided written notice is given at least two (2) weeks in advance of the planned resignation date.

In late winter, Kyle Boyer informed his supervisor of his intention to run for T/E School Board. He did so out of respect for his colleagues and the school district, knowing that it would become public information after nominating petitions had been certified. That initial conversation and the public knowledge of his candidacy constitute over 8 months’ notice of a possible vacancy in his position at Valley Forge Middle School. It is safe to assume that school administrators have planned for that possibility.

Kyle has chosen to continue working as a teacher in the district until voters select him to represent them on the school board. He is a native of T/E, graduated from our schools, and most importantly, is committed to serving our community. Parents have found him to be an excellent teacher and role model for their children. They see him participating in the community (he is a member of FLITE’s advisory board and a member of the Tredyffrin Parks Board). They know him as a person of integrity who has shown he cares about all T/E residents.

Regarding the suggestion of a conflict of interest, Kyle would be serving as a former teacher – with all the experience that entails. As others have pointed out, his opponent also is a former teacher, along with current school board vice- president, Scott Dorsey. Former school board members who worked as teachers and administrators include Rich Brake, Karen Cruickshank, Sandi Gorman, Kris Graham and Pat Wood, who resigned as TESD Coordinator of Community and Volunteer Services after her election to T/E’s school board. All have brought an appreciation for the educational process and the systems in which they operated.

Lastly, in response to anonymous comments about Kyle Boyer’s relative youth, remember that Debbie Bookstaber was elected to the T/E school board in 2009. She was 27 years old, a short-time resident of T/E, and had never attended public schools. The TTRC willingly supported her candidacy.

At 29, Kyle is an example of TESD’s great success at preparing its students well to succeed, and to serve their community. With a B.A. from the George Washington University, an M.S.Ed. and M.P.A. from University of Pennsylvania and his principal’s certification from Immaculata University, Kyle has successfully spent his career teaching. An ordained minister, he currently is pursuing a third Master’s in Divinity from Lutheran Theological Seminary and serves in the local faith community as well.

As one Valley Forge Middle parent commented online, “We should be debating the fitness of the candidates for their prospective positions, not procedural minutiae that are irrelevant to most.” I agree.

Sandi Gorman, former T/E school board member and head of T&E Care has endorsed Kyle Boyer. She writes, “I’ve honestly never known anyone more qualified and dedicated to the causes he follows. How lucky for the TESD that he believes that the good of our kids is a cause he’d like to champion!”

Sandi has served the best interests of the children and families of this community for thirty years and has earned our respect and appreciation. She clearly knows the facts and the law. A long-time Republican, she is supporting Kyle. All Region 2 voters should consider doing the same.

Both Kathleen Keohane and Kyle Boyer are wrong on state law and wrong on T/E school district policy on the fundamental concept of the 60 day rule that anyone with a background in education should understand.

Strike two is another false narrative claiming Mr. Boyer’s “initial conversation and the public knowledge of his candidacy constitute over 8 months’ notice” and “It is safe to assume that school administrators have planned for that possibility.” There is nothing that a school district will do to prepare for a teacher’s exit until they give their actual resignation. School districts have a process in place that starts once a letter of resignation is received, not before – and definitely not based on the possible outcome of a political campaign months away.

Strike three is another false narrative that “there is solid precedent that the T/E school district has released professional staff with much less notice.” What is missing is that those teachers gave 60 days notice and then were allowed to be released early after the school district went through the hiring process, hired the replacement, and knew when the new teacher could start.

As if those three strikes weren’t enough, there is this: Kyle Boyer signed an individual contract with the school district. That contract clearly stated that he had to give 60 days notice when resigning.

While I cannot fault Kathleen Keohane for not fully comprehending the 60-day rule, there is really no excuse for someone running on his educational background and educational knowledge not to understand it – especially after it was explicitly pointed out to him long before he was close to the 60 day deadline.