The saga surrounding the TE School Board’s decision to ‘mark its boundaries’ at local schools continues. Although the District withdrew its application to Tredyffrin Township’s Zoning Hearing Board, to seek a variance for 6-ft. chain link fencing, the Board remains determined to see the proposed fencing go up as a means to mark the school property lines.

In Chesterbrook’s Green Hills community, the District’s proposed chain link fencing at Valley Forge Middle School is set to go within a few feet of some of the homes. Affected homeowners in Chesterbrook have attempted to have a reasonable discussion with the school board but unfortunately, to date, those attempts have been unsuccessful. There are many issues at play that are seemingly ignored, including a 2002 agreement between the Chesterbrook homeowners and TESD regarding development of the property and the inconsistency of Green Hills Association bylaws regarding chain link fencing. The District’s chain link fencing may not comply with the Tredyffrin’s RC zoning district. According to the zoning ordinance, any wall or fence used as a buffer cannot conflict with the character of abutting district. Green Hills Homeowners Association are very strict about fencing and what is and is not permitted – I know of no chain link fencing used by any of the homeowners.

With a chain link security fence steps away from your backdoor, one has to question if the Board has considered the reduced property values of affected homeowners?

Valley Forge Middle School property is nearly 50 acres and the fencing at the Chesterbrook-Green Hills property line is located at the farthest point from the school. The proposed fencing is so far away in fact, that it cannot be seen from any point in the school. Other than to damage the values of adjacent property owners and prohibit local homeowners and children from ease of access, what exactly is the point of the fencing? Plus there’s the cost — The fencing estimate costs of the two middle schools and high schools was $250K plus an additional $100K in costs for the variance request that the District subsequently retracted.

Reasonable people should be able to have reasonable discussions. Why should residents face confrontation from the TE School Board when they ask questions and/or suggest compromise? Some Board members believe that once they are elected, it is their ‘right’ to make all the decisions. On one hand, School Board President Kris Graham regularly invites the public to attend committee meetings (“where the real work gets done”) but on the other hand, residents learn very quickly at the committee meetings that decisions have already been made and … that their opinion is neither needed or valued.

Some will suggest that ‘we’ elected these people so, therefore we get what we voted for and some on the Board will point to the high ratings of the District as proof they are doing a great job. I have heard Board members say that there are only a few dissatisfied malcontents in the community … and that everyone else believes that they are doing a great job. I’d say that the small group of malcontents is growing – just ask some of the Chesterbrook homeowners.

There’s only one currently serving TE School Board member seeking reelection – Kris Graham, who serves as TESD president. All of Chesterbrook’s 28 villages, including Green Hills, are located in the TESD District 2 voting district, which happens to be in Ms. Graham’s district. With 3,400 registered voters and their votes at stake in November, Ms. Graham may want to re-think her stance on the Valley Forge Middle School chain link fencing project in Chesterbrook. I suggest that Ms. Graham read the following letter from Green Hills resident, Peter Stanton, a long-time Chesterbrook homeowner who attended the District’s Facilities Meeting on Friday to discuss the VFMS fencing project.

I am writing to express my great disappointment over the secretive and disrespectful way the Tredyffrin Easttown School Board is treating me and fellow residents recently. I grew up believing that elected officials in our country are there to serve the public interest in an open and transparent way. I guess I am naïve in believing that inclusiveness is a key to our democracy. Recently, an example of the School Board’s disdain for the public they serve has arisen in the Chesterbrook community.
.
As many residents of Chesterbrook and the surrounding communities already know, a massive chain link fencing project is about to begin in June, virtually encircling the perimeter of Valley Forge Middle School’s huge (nearly 50 acre) campus. The ostensible goal of the fencing is for student safety in the wake of Sandy Hook, Columbine and other school-based atrocities. No one is disputing the desirability of enhancing student safety. However, it is dubious whether perimeter fencing is a desirable or even effective way to protect school children. What is clear, however, is that this project has been unilaterally rammed down the throats of the surrounding community with virtually no input until the project was approved and contracted out. (with a scheduled June start date)

Here’s why there is community consternation over this project:

– One of the first rules of security is the tighter the perimeter being guarded, the better. The security fence being proposed offers anything but security. The northern perimeter of the fence, abutting 5 homes directly, is nearly a quarter mile from the school itself and totally out of the sightlines of the school. Any potential intrusion at this perimeter location would go undetected, fence or no fence. A four feet high chain link fence out of sight of the school itself, poses minimal resistance to anyone desiring access.

– The fencing project violates a written understanding between the Chesterbrook Civic Association and the School Board, from 2002, to create an easement space of 250 feet between the homes of Green Hills and the athletic fields that now comprise the open space. In fact, berms were constructed in 2002 to help mark this ‘buffer zone’, and assist the residents in maintaining the peaceful nature of their environment. This was a good faith, respectful solution to a difficult problem that is now being summarily ignored by the same people who made the agreement in the first place. With the proposed fencing, open access to Chesterbrook ‘s wonderful system of interconnected walking paths and trails would be seriously compromised.

– Cost: Overall, the entire fencing project will wind up costing Tredyffrin Easttown residents about $190,000. Apparently, this exorbitant cost doesn’t faze our School Board at all. Seems to me that at least some of these funds could be directed towards retaining some of the 73 employees they plan to lay off this year to save employee benefit costs? (yet another example of the School Board’s penchant for operating under cover of darkness). I guess fencing is a higher priority than retaining loyal employees.

– The northern perimeter of the fence borders Green Hills homes directly. There are 5 homes directly on this border (mine included) where the fence will cut off access to long-enjoyed open space and forest. The 5 homeowners average 20 years of residency here, so open access would be sorely missed. There are also several other homes just off the School border, which would also be seriously impacted. For some homeowners, this planned fencing would come to literally within several feet of their homes back entrance. This is totally disrespectful to these homeowners, especially because satisfactory and effective alternatives are available.

So what should the School Board do to protect the students? My fellow residents and I are not anti-security, and we are advocating a “reasonable man” approach here. What’s “reasonable”? What about a perimeter fence that could actually be monitored visually from the School? Supplementing the existing fencing already in place around the upper athletic fields would provide direct sightlines to the secured area, thus a better level of security while probably costing the taxpayers a lot less. …At the same time, signs announcing the school boundaries could be posted at the actual border where potential intruders would be put on notice.

At the last School Board meeting in February, impacted residents were promised a choice of mutually agreeable dates to meet and discuss the project. Since then, the School Board has awarded the contract, obtained a Township permit for building the fence, then unilaterally scheduled a “take it or leave it” meeting date with the residents, which some residents will not be able to attend (with no chance of a proxy being allowed either), and an agenda not to discuss the project, but to determine if residents want to pay for fancier fencing!

So, T.E. School Board..…In addition to a more open discourse with residents on projects affecting the entire community, please come up with a better plan to secure our children’s safety. And at the same time, honor the commitments you’ve already made to the community.

In the photo below, Green Hills homeowner Gary Wu at 1452 Brandywine in Chesterbrook is standing right on the property line indicating how close the School District’s chain link fencing will go to his backdoor. Wow! 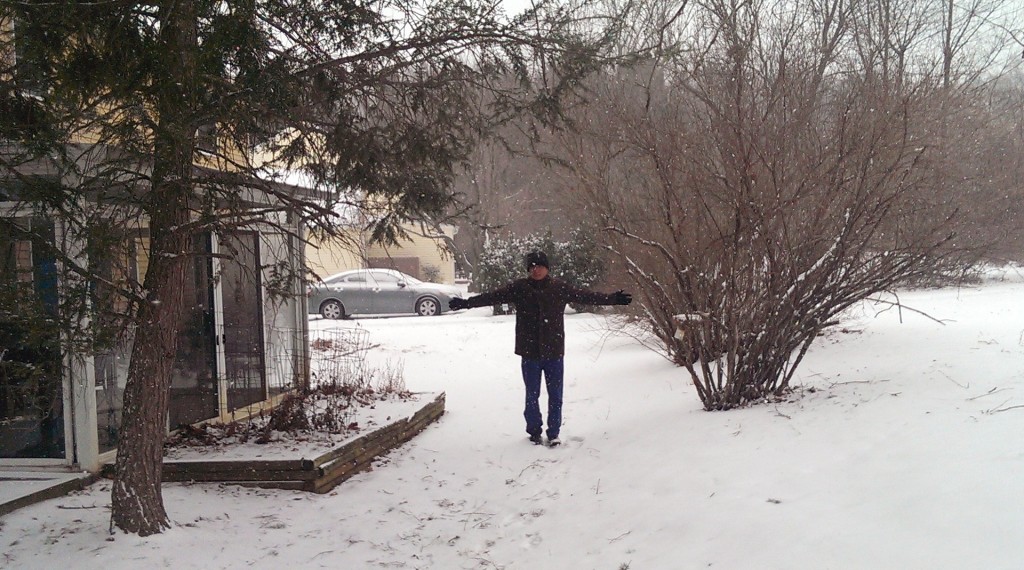