The TESD Finance Committee Meeting and the 2014-15 Budget Workshop 1 was held on Monday, March 10. Click here for the videos of the budget workshop. Please note that there are three separate videos. For those people unable to attend the budget workshop, including myself, I appreciate the District providing the videos. To fully understand the budget discussion, you should also review the agenda and slides prepared by TESD Finance Manager Art McDonnell prepared for the workshop – click here.

The following slide from the budget workshop, ‘Budget Development Summary’ reviews the 2014-15 preliminary budget development and indicates a $3.1 million budget deficit without any tax increase. With the addition of 2.1% Act 1 tax increase and 1.27% referendum exception (combined total 3.37% tax increase) plus the impact ($1.9 million) of the recently signed teachers contract, a deficit of $1.9 million remains. 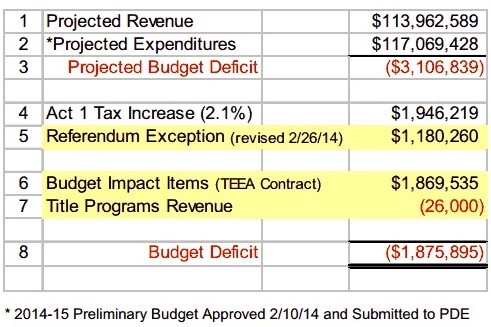 The budget workshop slide, ”Tax Impact from Act 1 Index and Exception’ indicates that the currently projected $3.37% tax increase will mean an average increase of $166 to the T/E homeowner.

It is interesting to note that the last time the District had a zero percent tax increase was budget year 2004-05, a decade ago. A review of the ‘Tax Increase History’ slide (below) indicates the property tax increases each year since 2004-05:

Earlier this year, the preliminary 2014-15 budget indicated a 3.2% increase. However, Harrisburg subsequently announced an increase in the PSERS exception, which allowed the District’s total allowable increase to go to 3.37% for the 2014-15 budget year.

But here’s the problem – even with a 3.37% increase, the District is still facing a nearly $2 million deficit. Other than a transfer from the fund balance, how does the District resolve the deficit?

The Budget Workshop II on April 7 will include discussion of:

It will be interesting to see the revenue and expenditure projections for the 2013-14 school year. If you recall, the District has somehow ‘found’ mega-millions in surplus the last two years. Unfortunately for taxpayers, each year the money has been found after the next year’s budget has been passed (with a tax increase).

For the 2011-12 school year, the budget surplus was $3.9 million and it was nearly $5 million for 2012-13 school year. It’s never been entirely clear where the budget surplus came from although I seem to recall that ‘lower than anticipated insurance costs’ was used to explain a portion of the surplus. Surely, the school board would not approve imposing a 3.4% increase on its taxpayers and discover a budget surplus for the third year in a row. Not sure that there’s any valid explanation if that were to happen.