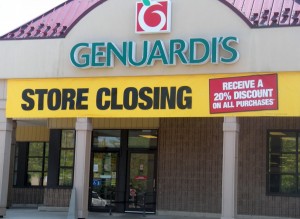 A couple of friends had mentioned stopping by Genuardi’s in Chesterbrook this week to say good-bye to staff and to have a final look so yesterday I stopped by the store. As I walked to the front door, the floral lady was leaving the store with a cart full of floral accessories. I asked her if she was going to another store, she said no and further remarked, that at her age no one wanted her. She thought she would just stay home, play with the grandchildren and catch up on her reading.

As I entered the store and walked the aisles, it was a very eerie feeling. Aisles that would normally be overflowing with product and people now were just empty. I’m guessing that about 80% of the shelves and counters were cleared in anticipation of Saturday’s closing. The pizza guy told a customer he could make him a cold sandwich but the heating elements had been disconnected so he could not prepare any hot foods. The deli had a couple of items left and the sushi chef was making up final orders. Workmen were dismantling shelving and taking down signs. I stopped by a cashier to wish her well . . . she told me that it was her last day, she was leaving Genuardi’s after 15 years. It was my understanding that the employees had been offered jobs at other stores but she explained that only part-time positions were offered; no one received an offer of full-time employment regardless of years of service. I have to believe that Mr. Genuardi who started the chain in the 1920’s would be none too pleased with the treatment of these employees. 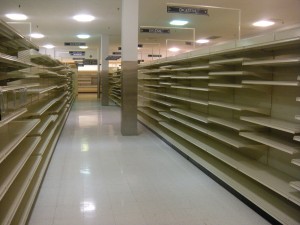 Genuardi’s in Chesterbook will officially close its doors tomorrow at 6 PM – Manhattan Bagel is having a send-off for the employees at 7 PM.

I guess I could feel better about the closing of Genuardi’s if I was confident that this shopping center would rise as Phoenix from the ashes. But something tells me that it’s going to be a long time before we see a new tenant in this space. Will the Rite Aid, Subway and others be far behind . . . ?

This is not intended to be negative but rather a realistic view of what may likely (or rather unlikely) happen to the Chesterbrook Shopping Center. A real ‘sign of our times’ in our own backyard.

For those that have lived in Chesterbrook and the immediate area for a long time, maybe you want to stop by in the next 24 hours before Genuardi’s closes their doors.