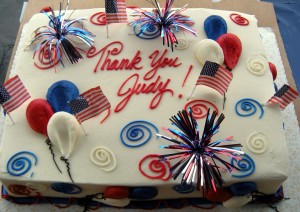 Yesterday’s threatening sky and a few raindrops was not going to keep members of the community from thanking Judy DiFilippo for her 20 years of public service to Tredyffrin as a township supervisor. Judy had the vision for Wilson Farm Park so it was only fitting that the park’s gazebo was named in 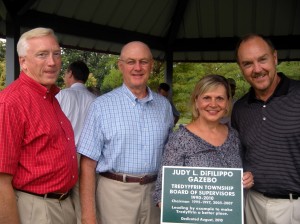 The appropriate inscription on the

gazebo plaque reads, “Leading by example to make Tredyffrin a better place”. The next time you are Wilson Farm Park, I hope that you take the time to stop by and see the newly named gazebo. An honor well deserved, we thank Judy for her many years of service to our community!