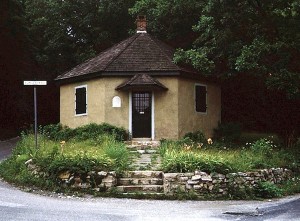 The public is invited this Sunday, June 13, 2-4 PM to the Annual Summer 2010 Open House of the very special historic Diamond Rock Schoolhouse. The schoolhouse is located at the intersection of Yellow Springs Road and Diamond Rock Road in Malvern, near Valley Forge Park.

Please, . . . take the opportunity to visit this little jewel in our own backyard. Stop by and bring your children so they can see how it was in the ‘olden days’ before cell phones and computers.

A brief history of the Diamond Rock Schoolhouse from their website, www.diamondrockschoolhouse.org :

In 1818, half a century before the advent of public schools in this area, a small community of primarily Mennonite families contributed their labor and money to building this one room schoolhouse and hiring a teacher. They chose an octagonal plan – at the time a popular architectural concept – because it provided one wall and window for each of the six grades, another for the teacher opposite one for the door. The students sat on benches facing table-like desks against the wall with their backs to the warmth of a small wood-burning stove. As the teacher would address a class, those students would turn around to face the center.

As the population increased, the school closed in 1864 and the pupils were divided between nearby Walker and Salem Village schools. After 1864, the old schoolhouse fell into disrepair but was eventually restored in 1909 by the Diamond Rock School Old Pupils Association, a group of former students who saw great value in preserving their former school for future generations. Their work is continued today by the member-supported Diamond Rock Schoolhouse Preservation Association.