The sidewalk project is now in full swing on Conestoga Road and Old Lancaster Ave by Conestoga HS and T-E Middle School. The series of pedestrian sidewalks were made possible by various grant funds, including $2.8 million from the American Recovery and Reinvestment Act (federal stimulus funds). To read further about the sidewalk plan, budget, and updates on the township website, click here.

It is true that change and progress sometimes comes with a personal price. In the case of the sidewalks, some would suggest that there has been a very real economic and personal price tag paid for by the homeowners whose property has been effected by the sidewalk project. As I drove down Conestoga Road last week, I stopped to take photos of examples of tree removal. One of the beautiful historic houses that lost its front coverage was on Tredyffrin Historic Preservation Trust’s 1st Annual Historic House Tour, 6 years ago. The house has lost trees, shrubs and plantings. Here is a photo of the way the homeowner’s front yard currently looks: 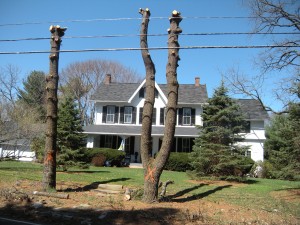 Before anyone jumps in and suggests that I don’t care about the safety of the children who walk along Conestoga Road to school — that simply isn’t true; I care about everyone’s safety. But it still saddens me to see the neighborhood along the north side of Conestoga Road so dramatically changed by this construction project. I feel for the homeowners whose property has been forever altered. Although the homeowners will not be compensated financially; it is my understanding that the sidewalk plan calls for replanting of all trees and landscaping that have been removed for the sidewalk project.

Everyone should know that the upkeep of the sidewalks will becomes the responsibility of the individual homeowners. I wondered what would happen if there was an elderly homeowner or an owner who wintered in Florida and was gone during one of our Pennsylvania snowstorms? Who would be responsible for clearing their sidewalk? I was told that the clearing and upkeep remains the responsibility of the homeowner . . . guess he/she better make those arrangements before heading south for the winter! As wonderful as it may be to make our community more walkable . . . for some there is an additional personal price tag that goes along with progress and change.

Five years ago, I was going through a bad time. One day, I drove down Old Lancaster and saw that a house that I had admired for years was on the market. I was so excited that I put an offer in that day. Being English, I did the customary thing and named my house. Without hesitation, it became “HoHi” (after the “Hall of Intense Happiness – a building in I toured on a visit to China.)

My portion of Old Lancaster has old houses (most were build in the 20’s), no garages (converted years ago to extra living space), short driveways, and mature vegetation. We (had) a wide shoulder which left ample room for parking, walking & biking. My row of brick Tudors was “the” development of the time, I’m sure!

Anyway, long story short. Soon after moving in, I learned about the sidewalk project. Because the section of Old Lancaster is state owned, there is a 50’ easement — meaning , from the center of the road, the State controls 25 feet in each direction. I learned that Tredyffrin decided to go take all 25’ from the South side of the road – the side with no garages, no parking and mature vegetation. Because it’s a state road, extra ‘safety’ precautions were required i.e. EXTRA wide sidewalk plus “bump outs” to create a buffer between the pedestrians and the cars.

Residents banned together and formed a “Yard for a Yard” petition earning nearly every signature in the area. We contacted the TE historical society, the TE BoS, anyone that we thought might actually care, and we simply asked that the project be shifted 3 feet (a yard) towards the north side hence 3 feet of our yard would be saved. This would have translated into a saving of most if not all of the trees. We would still take the burden of owning the 5 foot (yes, 5 not 3) sidewalk but we would maintain our trees. Currently (pre-sidewalk) the paving encompasses 10’ in either direction (north and south – south being where the sidewalk will be built). With our proposal, the project would have gone from 10’ to 22’ instead of 25’ of the south side. The north side resident’s would be impacted by 3’(no trees and very, very few shrubs).

We were shot down so fast we didn’t know what hit us. It wasn’t until the sidewalk project became personal to the board did it gain attention. I have so much hurt and anger that it has been making me physically ill. Of course I share concern for the safety of children. Yet (knock on wood), I researched and was not able to uncover any accidents on record.

My HoHi is not a HoHi anymore. And thanks to rotten economy and eye-sore of a yard, I’m trapped here for at least a few years. Am I bitter? Clearly! While it’s too little too late, I truly do appreciate that people have taken the time to share sympathy. It means more than you can imagine that someone finally cares.

Tonight, I’m going to add a link to “before and after” photos simply to provide people a reminder of the importance of supporting neighbors because you never know when your home will be on the radar.

The appearance of established neighborhoods and historic buildings are now altered by the removal of trees and landscaping.