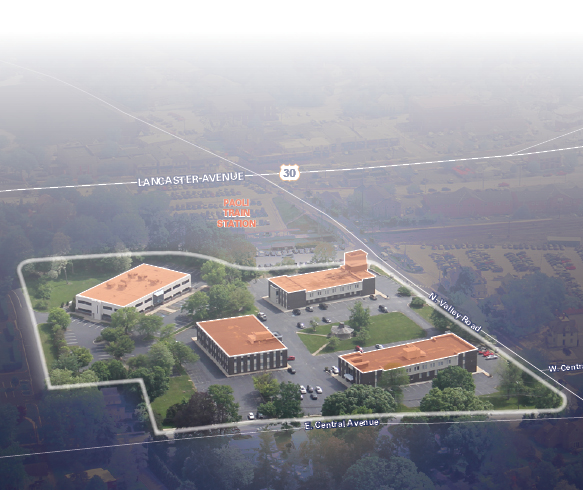 The Station Square office building complex remained for sale with a $9 million listing price and the tenants on month-to-month leases. On April 21, 2016, Linden Lane Capital Partners appeared before the Planning Commission to present a new redevelopment plan for the Station Square complex. Following a lengthy discussion and public comment period, no action was taken by the Planning Commissioners and the application received an extension until the May meeting.

On Thursday, May 19, Linden Lane Capital Partners will present its conditional use application for the redevelopment of Station Square to the Planning Commission. The proposal is to construct three new mixed-used buildings, with structured and surface parking. Uses include apartments and rental space for office, retail and/or personal services. Linden Lane is seeking a recommendation from the Planning Commission for approval by the Board of Supervisors. Upon recommendation (for approval or denial), Linden Lane will appear before the supervisors for a Conditional Use Hearing.

In 2014, residential neighbors of Station Square were successful in their efforts opposing the proposed multi-story apartment complex. Knowing that increased traffic in their neighborhood was a major concern for Paoli residents, the 2016 redevelopment plan seeks to address those concerns. According to the conditional use application, the developer will work with the township and the PA Department of Transportation to mitigate the traffic issues although no specifics are given. With respect to the parking, the applicant intends to provide for a minimum of 75% of the required parking with a structured parking facility.