In addition to great blues music, food and drink . . . the night’s Silent Auction has some fabulous offerings, including Phillies tickets, Antoinette and MediSpa visits, Aronimink golf package with lunch & drinks, and much, much more!

It’s not too late to get your tickets. Visit the Paoli Blues Fest website, www.paolibluesfest.com for further details and to purchase a ticket.

After the success of the first Paoli Blues Fest held last summer, the event has been made an annual one. On Saturday, Oct. 2, Paoli will be taken over by blues musicians and music-lovers alike. From noon to 5 p.m., live music, a street fair, vendors of all varieties and activities for children will be in three areas. Stages will be set at the Paoli Shopping Center and Malvern Federal Bank and the main stage will be at Paoli Village Shoppes.

According to event co-chair Pattye Benson, the expected amount of attendees could be 10,000 people. “This was the largest blues festival in the Philadelphia region last year,” said Benson. “There was an excess of 5,000 in attendance.”

To prepare for this year’s Blues Fest, there will be a “Paoli Sings the Blues” fund-raiser Friday, July 30, from 7 to 10 p.m. at the Royer-Greaves School, 118 S. Valley Road in Paoli. The purpose of the event, according to Benson, is twofold.

“We’re hoping this will be financially helpful for the Blues Fest, but we also hope to get people really energized for this year’s event,” said Benson. “We’re having shirts printed to sell at the fund-raiser. Hopefully people will wear them and get the word out about the event.”

The fund-raiser will consist of live music by PokerFace as well as guest Russ Lambert of the Dance Shaker Band. Alcoholic and nonalcoholic drinks will be available, and the food, which is being provided by Bridgeport Ribhouse, will be Southern-style barbecue chicken and ribs.

In addition, guests can participate in a silent auction with items such as Phillies tickets and gift certificates to local shops and restaurants. Tickets are $45 and for sale at the Paoli Blues Fest Web site, www.paolibluesfest.com. All proceeds from the fund-raiser will benefit this year’s Blues Fest.

The Paoli Blues Fest was started after a recommendation from local blues musicians.
“A couple of musicians came to the Paoli Business Association and suggested it would be a great idea to have a blues festival as a means of trying to excite and inspire the Paoli community,” said Benson, a member of the Paoli Business Association. “We felt this could be a real feel-good community event that could spur local business sales.”

While last year’s event was held under the auspices of the Paoli Business Association, it was decided that it needed to be its own entity. According to Benson, the Paoli Blues Fest Inc. recently received 501c3 nonprofit designation, which makes donations tax-deductible as permitted by law. “We were so excited. This is a huge deal and an enormous validation for this event,” said Benson.

Many businesses as well as individuals are helping to make sure this year’s Blues Fest goes off without a hitch. With a budget of $40,000, a lot of work from many volunteers goes into securing the necessary finances. Among this year’s sponsors are Paoli Hospital, Malvern Federal Bank, Paoli Hardware, Main Line Today, Main Line Suburban Life and TD Bank.

“Every sponsor from last year is sponsoring this year and more,” said Benson. “And we’re hoping the fund-raiser will help financially as well.” Along with the sponsors, many of the same musicians from last year will be performing, along with some fresh faces. “Because of the success of the inaugural event, we started receiving musicians’ CDs from all over the country,” said Benson. “One came from as far as California.”

Benson went on to explain that at 4 p.m. on the day of the Blues Fest the two smaller stages will close and the main stage will host all performers for one final joint set. “They have a special song that they have all learned and will perform,” said Benson.

While it is a lot of work to make sure this event goes off as planned, Benson, along with co-chair Marie Thibault, said they do it for the community. 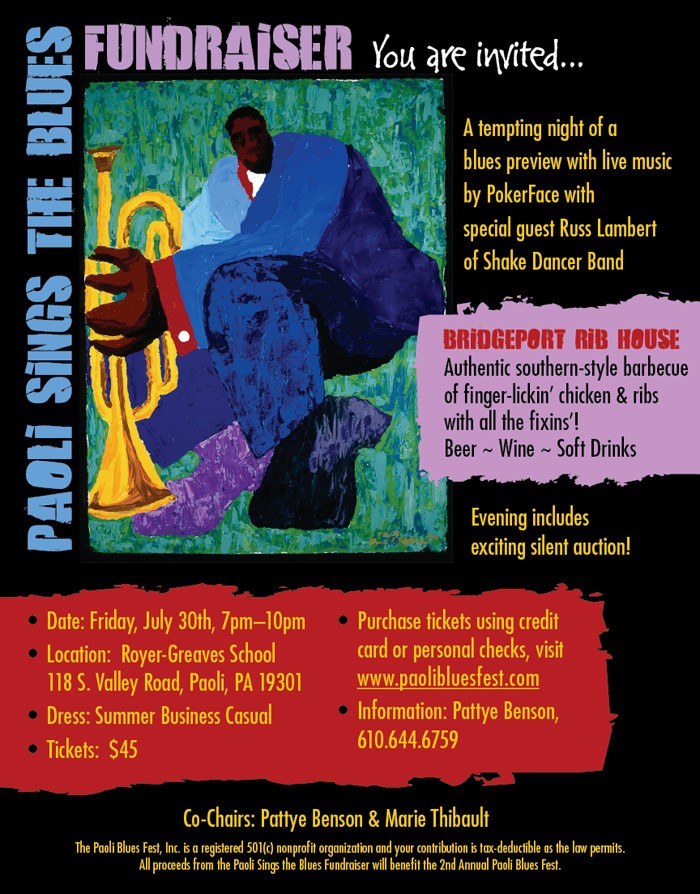 Based on the success of last year’s Paoli Blues Fest, the committee decided to move ahead and make the free community event an annual event. We have scheduled the 2nd Annual Paoli Blues Fest for Saturday, October 2 and the volunteers have been busy lining up blues bands, sponsors, street fair vendors, etc. The board of directors of the Paoli Blues Fest applied for, and the IRS recently awarded us with 501(c)3 status which makes all donations tax-deductible as the law permits.

Last year, 5000+ people from Paoli and beyond attended the blues festival and this year we are expecting the 2nd annual event to far exceed that number. As you can imagine, the budget for a major community event is not without expenses. While we are grateful to the many sponsors, including Paoli Hospital, Paoli Hardware, Penn Liberty Bank, Malvern Federal Bank, to name but a few, we decided a summer Paoli Sings the Blues fundraiser would help kick-off the Paoli Blues Fest and help us raise funds for the free blues fest in October.

The Paoli Sings the Blues fundraiser is scheduled for July 30th and will be held at the historic Royer-Greaves School on N. Valley Road in Paoli. The event will provide a wonderful preview night of blues music with PokerFace, finger-lickin barbeque, silent auction and lots of fun and laughter. Visit www.paolibluesfest.com for information about the fundraiser and the 2nd Annual Paoli Blues Fest. Tickets for the fundraiser can be ordered online or click here for thePaoli Sings the Blues Fundraiser Ticker Order Form.