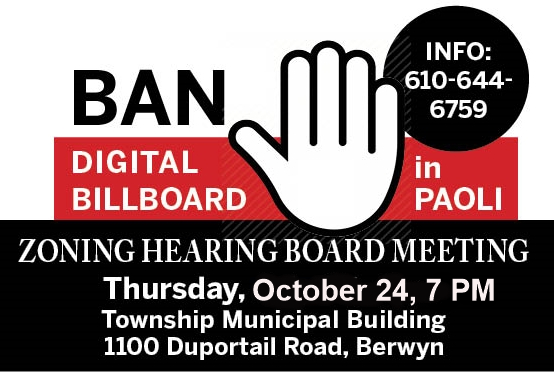 Catalyst Outdoor Advertising first appeared at a Tredyffrin Township Board of Supervisors meeting in August 2018 with their proposal to demolish the Clockworks Building and install two large 20 ft. digital billboards with a reflecting pool as the “welcome” to our 300-year old township.

For the last fourteen months, the public has remained committed in their opposition to ‘BAN the Digital Billboard’. Residents filled the seats of Keene Hall for three Zoning Hearing Board meetings and eloquently delivered their message of “Just Say No” to a digital billboard at the intersection of Rt. 252 and Lancaster Avenue in Paoli. My words at the last Zoning Hearing Board meeting were simple, “We are not a community divided” – the community has stood in complete solidarity in its opposition. We do not want a digital billboard. Period.

The final decision rests with the Zoning Hearing Board – the township heard the public and denied the application for the digital billboard and it’s now up to the ZHB to uphold and support. As I understand it, there are two ways this can go on Thursday – either the ZHB upholds Tredyffrin Township’s previous denial of the Catalyst application for a digital billboard and rules against their appeal or … the ZHB rules in favor of Catalyst on their appeal.

The proposed digital billboard is probably one of the most important issues to face our community in recent years – please plan to join me on Thursday at 7 PM, Tredyffrin Township building for the Zoning Hearing Board decision.