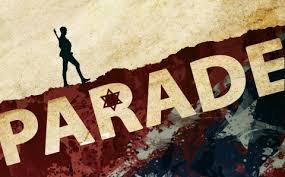 A bit of history about Footlighters Theater from their website — the group organized in Wayne in 1929 when T. Baynard Beatty, principal of Radnor High School and himself, an experienced drama enthusiast, held an open meeting for those “whose interest centered on mutual entertainment and the development of dramatic abilities.” Originally the Footlighters were sponsored by the Saturday Club of Wayne and performances were held at that location.

In 1973, Footlighters moved to Berwyn, to the historic Berwyn M.E. Church (c. 1888). After a period of 10 years of leasing the space, the Footlighters mounted a Capital Campaign and purchased the building. Improvements have been made to the building but it still retains its original charm, including an intricately carved beamed ceiling and original stained glass window.

Little did Footlighters know that when they planned the final production of the season, “Parade”, that it would be such an ideal choice for the times! Parade is a remarkable musical which tells the story of Leo Frank, amid a background of anti-Semitism in America in 1913.

A description of “Parade” from Bill Elms Associates of UK are below. The words, “Parade is filled with soaring music and a heart-wrenching story, offering a moral lesson about the dangers of prejudice and ignorance that should not be forgotten” are as appropriate in 2018 as they were in Georgia in 1913. “Parade” is a perfect reminder for all of us — I plan to attend a performance.

With a book by acclaimed playwright Alfred Uhry (Driving Miss Daisy) and a rousing, colorful and haunting score by Jason Robert Brown (Songs For A New World, The Last Five Years, Bridges Of Madison County), Parade is a moving examination of the darkest corners of America’s history.

In 1913, Leo Frank, a Brooklyn-raised Jew living in Georgia, is put on trial for the murder of 13-year-old Mary Phagan, a factory worker under his employ. Already guilty in the eyes of everyone around him, a sensationalist publisher and a janitor’s false testimony seal Leo’s fate. His only defenders are a governor with a conscience and, eventually, his Southern wife who finds the strength and love to become his greatest champion.

Daring, innovative and bold, Parade is filled with soaring music and a heart-wrenching story, offering a moral lesson about the dangers of prejudice and ignorance that should not be forgotten.