However, we learned upon arrival at the meeting, that the school board and the teachers union had reached a tentative 3-year contract. (The teachers contract expired June 30, 2017.) An overview of the contract negotiation process was presented by the District’s labor attorney Jeffrey Sultank of Fox Rothschild. Specifics of the contract presented by District administrators Art McDonnell, Dr. Gusick and Jeanne Pocalyko.

The school board provided few updates to the public during the contract negotiation process which began in January. In past contract negotiations, the public received regular updates were provided, including the members of the committee. The lack of information (particularly after the teachers contract expired on June 30) added to an already stressful situation with the teachers mounting their own PR campaign the last couple of months.

Below are the five slides that accompanied the fact-finding/teacher contract presentation. Although the fact-finding report and the teachers’ contract are not yet on the District website, the update should happen shortly. Following the slides, Ray Clarke provides a few specifics from the contract. 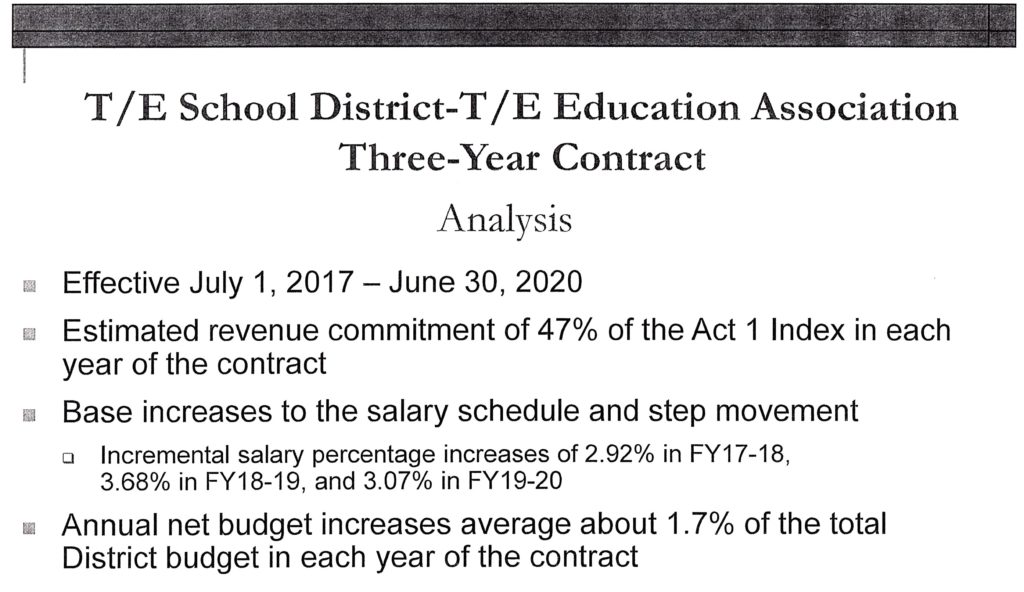 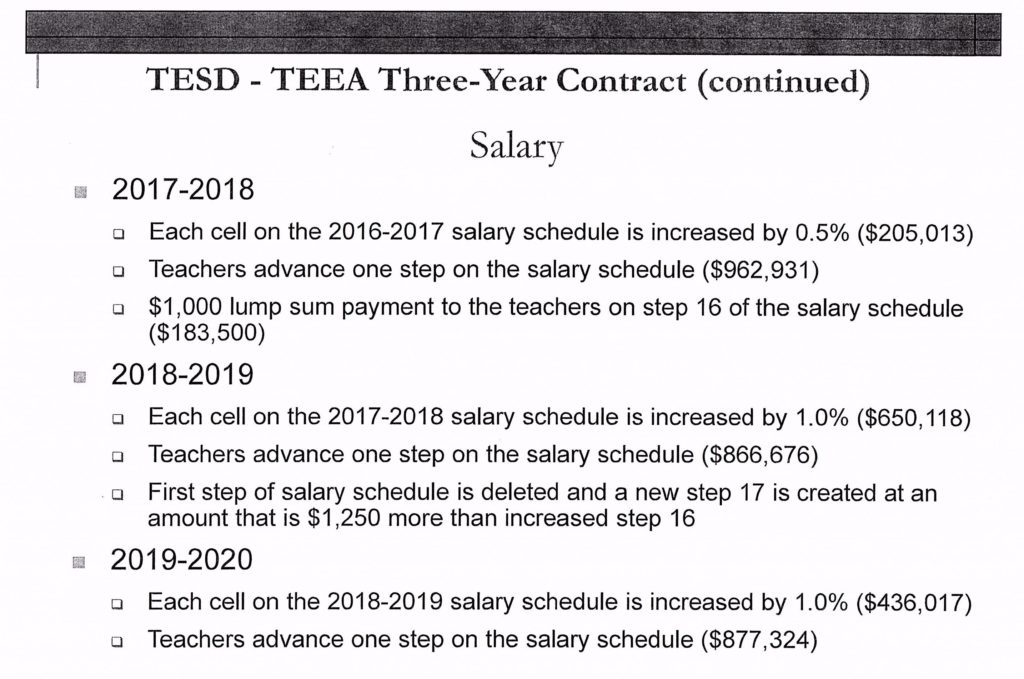 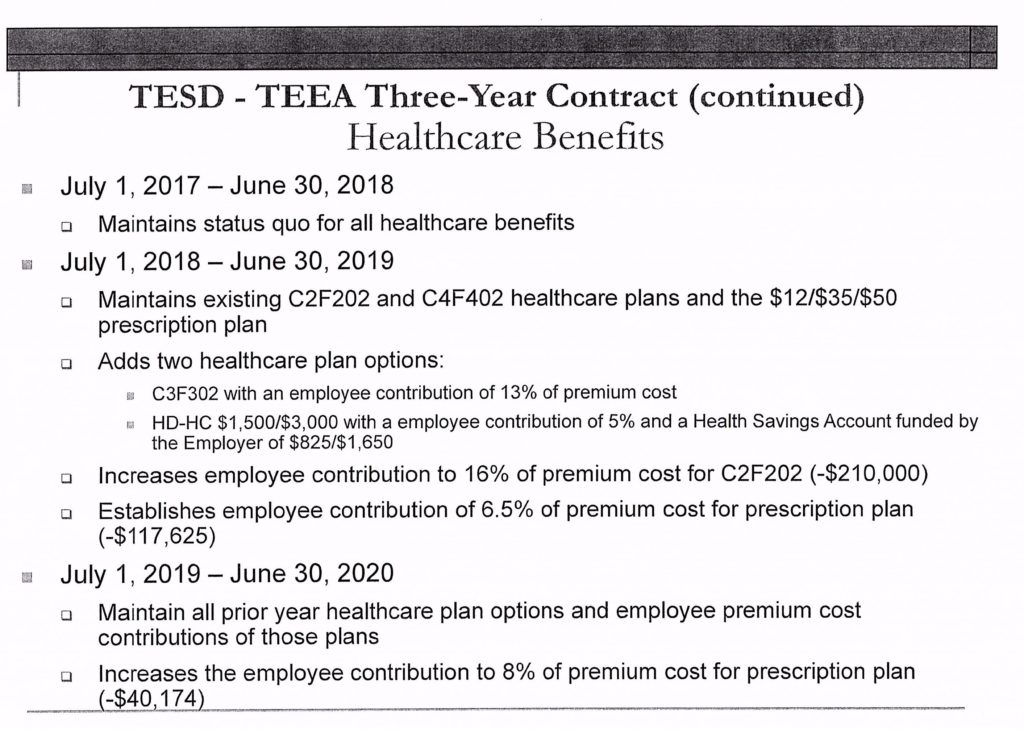 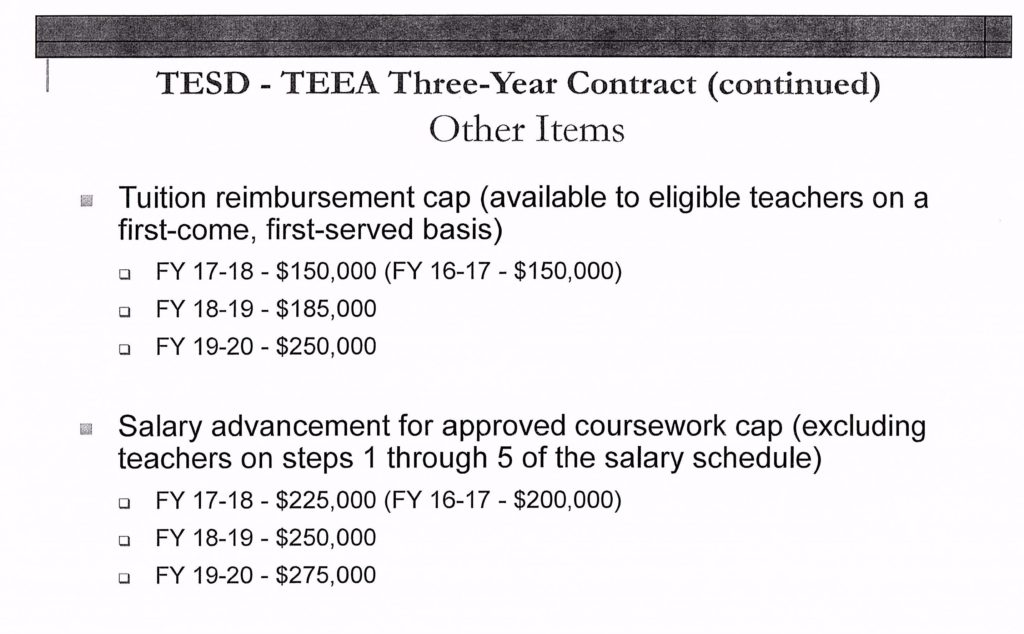 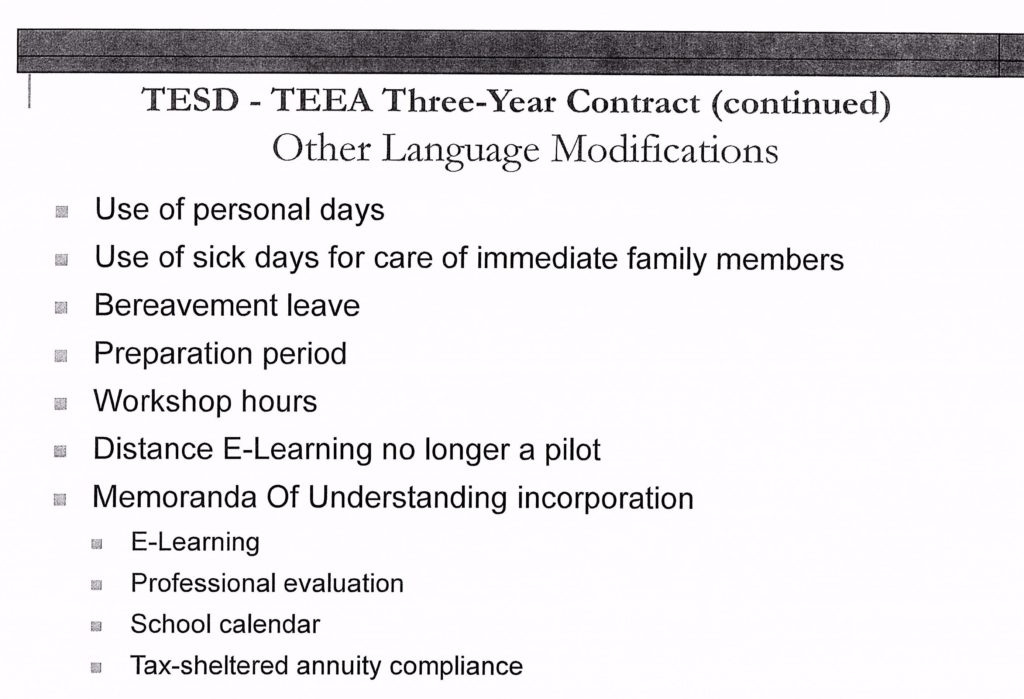 – Somehow this increase is equal to 47% of the revenue expected from increases in the Act1 Index of about 2.5% per year. (Despite a question, I’m still not sure how these numbers reconcile – part of the problem of not having an integrated summary).

– Salary increases aggregate to 10% over the three years, a cost offset to some extent by increases in the employee share of the premium for one of the health plans from 13% to 16% next year and by the implementation of a 6.5% share of the prescription plan premium, also next year. The salary increases come from matrix increases of 0.5% to 1% and from step movement, plus raising the caps on tuition reimbursement and column movement. The top step – always key with 40% of the staff there and earning ~$100,000/year – gets a $1,000 bonus this year, a ~2.5% increase next year and a 1% increase the year after.

– The cost calculations assume the current teacher population moves along the matrix and stays at the top level, no retirements.

The Union and Board both seemed content with what appears on the surface to be a balanced agreement. It will be important for the Board to remember that the District does not have to raise taxes equal to this or other cost increases. Tonight Tredyffrin Township reported that its assessed base has increased 1.1% in 2017 YTD.