Some have suggested that former school president Kris Graham’s re-election defeat last month was a message for change from the community – a call for transparency and improved public engagement. Will that message influence the reorganization results?

School board vice president under Kris Graham was Easttown resident Doug Carlson and he looks to want to step up to the board president position. Also seeking the president role on the board is Tredyffrin resident Scott Dorsey.

For the first time in TE School District history, the school board of nine members now has a Democratic majority (5 D’s, 4 R’s). Presumably this should give Dorsey (D) an edge over Carlson (R) but … it is unlikely that all D’s will support Dorsey. However, Dorsey does have the public endorsement of newly elected school board member, Republican Ed Sweeney.

Committed to honoring his campaign promise of improving public information and citizen involvement, Sweeney posted the following on his Facebook page today, “I endorse Scott Dorsey for TE School Board President. My district elected me to fulfill their expectations. Mr. Dorsey is very concerned about the issues that I think Tredyffrin and my district care most about and is well qualified to be President. I was impressed with his ability to outreach in his campaign for Board President. Mr. Dorsey will partner with fellow members, residents, and stakeholders to bring a new spirit of cooperative government to our area.” Here’s hoping that all newly elected school board members will likewise honor their campaign commitments!

For those in the community that are paying attention, the first meeting of the new school board and the nomination/election process for board president should be interesting.

On another note, the final meeting of the ‘old’ school board was held on Friday, December 7. Ray Clarke attended the Facilities Meeting and provided the following update for Community Matters:

The last Facilities Committee meeting of 2015 and of Dr Motel’s 16 year tenure was held on Friday. The meeting was generally routine: discussion of minor change orders, an update on the ongoing New Eagle and Maintenance Building projects with helpful status photos, and an outline of the timetable for bidding next year’s projects. A few items caught my attention:

– Dr. Motel stated that the original rationale for the fences was for “the specific purpose of making sure students do not leave”, “nothing to do with active shooters” and “you can put that on the blog”. So here it is. Others may have different recollections.

– Resident Cindy Marturano tried to engage the Committee in a discussion of protocols for communication to all residents of facilities projects that impact the community, linked with the possibility of extending West Walker Road to Chesterbrook Boulevard to ease the traffic congestion at VFMS. The response to both points came down to: “if it’s a road matter talk to the Township”. However, Tredyffrin Township records show that West Walker Road is “Private”, and the Chester County GIS has the property line between the school and church running right down the middle of the road. On the other hand, the Township included West Walker Road on its list of roads to pave in 2015. Are the maps incorrect? Is Tredyffrin subsidizing the School District? Or is there more opportunity here for the School District to improve the daily nightmare than the District knows about or would like to accept?

– The outgoing Committee spent some time discussing the goals for the 2016 Committee. Since that Committee will have a different composition with likely some newly elected Directors, this seemed rather presumptuous, but the Committee did not take kindly to the idea of including even a “Recommended” modifier, noting that the new Committee can always repeat the same exercise.

– This last point may be related to a gift to the Committee from Daley and Jalboot of a life size “Flat Pete”, with the request that it be used as a reminder of Dr. Motel for future Committees.

Dr. Motel noted that when his parents came to Easttown in the last century it was because TE was a highly rated school district. I think that the Board and staff are fortunate to serve a community that continues to be driven by this value. 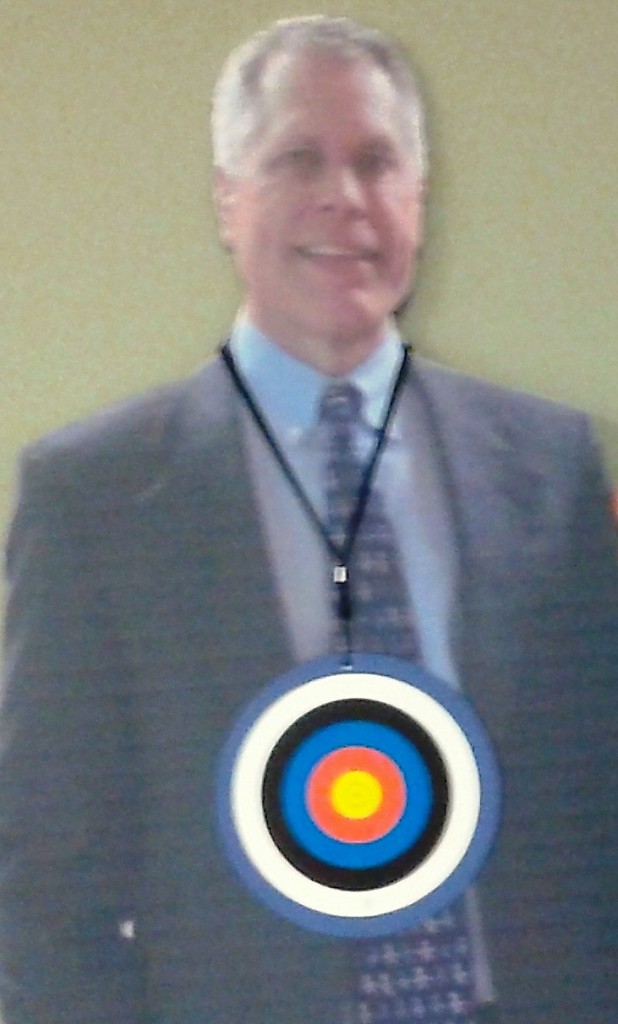 vided the following photo of the cardboard cutout of Flat Pete, as presented by the District’s architects, Daley & Jalboot. When asked about the bulls-eye on Dr. Motel’s chest, Ray explained that the necklace had a gold star one side and a bulls-eye on the other, presumably to represent Motel as a target.

I wasn’t at the meeting, but I found this gift rather bizarre. It was unclear if the Flat Pete cutout went home with Dr. Motel after the meeting or if it will continue to haunt the Facilities meetings going forward.