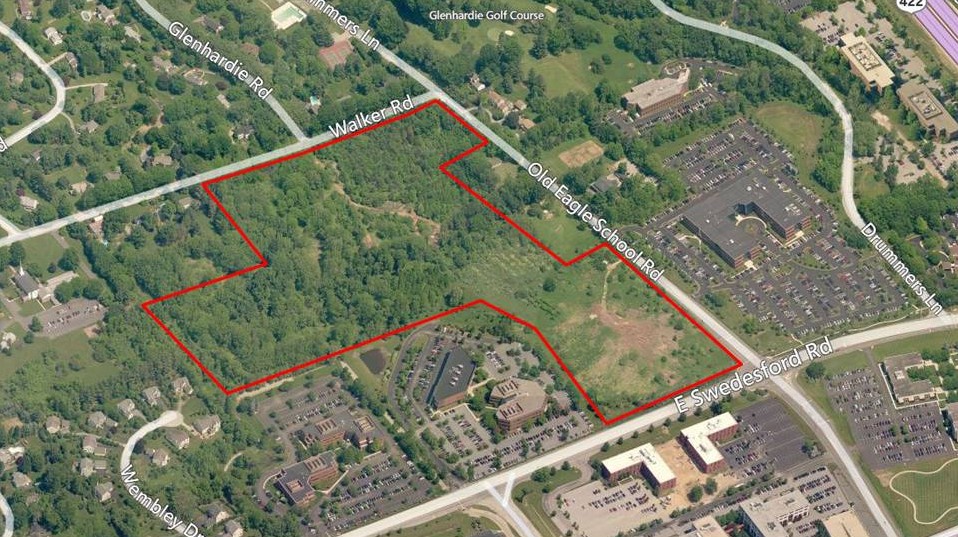 Tredyffrin’s Board of Supervisors approved the Conditional Use application for the Wayne Glen project by a vote of 5-2 at the special Board of Supervisors meeting last night. The proposed mixed-use development of townhomes and carriage homes plus a commercial office development is located on the Northwest corner of the intersection of Swedesford and Old Eagle School Roads in the Glenhardie section of Tredyffrin Township.

Wayne Glen’s developer Arcadia Tredyffrin LLC will be the first developer in Tredyffrin Township to utilize the Trout Creek Overlay District zoning which requires increased stormwater management and flood control in the flood-prone Trout Creek area. The plan is for 108 residential units and a 240,000 sq. ft. office building.

Arcadia filed its application in April 2013 and many, many meetings have taken place in the intervening two plus years – with the Planning Commission, Glenhardie citizens and homeowner groups, residents, supervisors, township staff, experts, etc. The township held seven public hearings regarding the proposed project in 2015, where citizens with standing, and experts for the township and developer, provided testimony.

Knowing that you can never “please all the people, all the time”, there were a couple of Glenhardie residents, Jacqueline and Richard Kunin, who expressed their displeasure at the supervisor’s vote to approve the conditional use. The Kunin’s have passionately stated their opposition to Wayne Glen throughout the process, claiming that the stormwater and sink hole issues are not adequately addressed by the developer’s plan. They have also continued to cite concern that the proposed project may be located on a sacred burial ground of Revolutionary War soldiers and Indians.

The vote of 5-2 by the Board of Supervisors to approve Arcadia’s conditional use application came down along political party lines – the five Republicans (Mike Heaberg, Kristen Mayock, EJ Richter, Paul Olson and JD DiBuonaventuro all voted in favor of the conditional use application and the two Democrats (Murph Wysocki and Mark Freed) voted against the application. Both Wysocki and Freed delivered lengthy remarks as to why they could not support the project. Wysocki used the words “unsuitable”, “unsound”, “unsound” and “unsafe” in describing the Wayne Glen project and Freed claimed that Wayne Glen was “ill-advised” and that the property was “not suitable” for this type of development.

The next step in the Wayne Glen project is for Arcadia to submit their land development plan to the Planning Commission.