With the outsourcing threat present since 2013, residents continued to support the aides and paras, the only group of District employees not covered by health insurance (and the only group of employees without collective bargaining status). Many in the community questioned the Board’s decision to outsource to avoid the cost of complying with ACA and … if this was the right alternative for the TE School District.

The journey of the District aides and paras moved forward during the 2014/15 school year, knowing that the Board continued to discuss their outsourcing future as a budget strategy. In a surprise move, the School Board approved a resolution to change the employment status of the 73 full-time aides and paras at the February 3, 2015 TESD meeting. The action was taken without notice, other than listing ‘Affordable Care Act Update’ on the meeting agenda, and after five secret executive session discussions held on November 5, 2014, December 16, 2014, January 12, 2015, January 20, 2015 and February 3, 2015.

The Board’s February 3, 2015 action to outsource disrespected our expectation of good government. Some residents believed that a PA Sunshine Act violation had occurred by the Board’s action, whether by misinterpretation or misapplication of the language of the Act, or … by intention. Adding insult to injury, the affected group of aides and paras, learned of the Board’s decision via email at 10:30 PM following the February 3 Board meeting.

The Sunshine Act defines when government bodies must conduct official business in public and private, when they should allow public comment, and how and when to advertise meetings. The Act is a mechanism to increase public participation in the democratic process by minimizing secrecy in public affairs. The School Board has had a longstanding practice of meeting in executive session before its regular meetings. In the case of the February 3 policy decision regarding the Affordable Care Act, the discussions were held in private during 5 Executive Sessions, out of the light of the public eye and without benefit of public deliberation.

Believing that the Board’s actions of February 3 regarding the aides and paras violated the spirit and letter of the Pennsylvania Sunshine Act, a small group of concerned citizens (Neal Colligan, Ray Clarke, Barbara Jackson, Peggy Layden, Jerry Henige and I) sent a February 13, 2015 letter to the Board. The request was simple … they asked the School Board to re-open the outsourcing discussion at the School Board meeting on February 23, to provide a thorough financial analysis of the ACA options and strategies, an explanation of suggested policy changes, and to allow for adequate resident commentary. As residents, these residents believed that with quick action at the February 23 meeting, the Board could remedy the process and maintain the trust of the community in the integrity of the District’s governance. The resident’s suggestion to re-open the outsourcing discussion was disregarded.

Troubled by the dismissive and trivializing response, it remained clear that the District had not provided adequate notice to the public regarding the proposed policy changes nor specific reasons for each of the five Executive Session discussions of the Affordable Care Act; further adding to the Sunshine Act violation case. Residents and signers of the February 13 letter appealed to the Board to step from behind the words of the solicitor, to take the situation seriously and to think independently. Again, there was no response from the Board in this regard.

On March 27, Colligan received a response to his RTK request from the District’s Open Records Officer Art McDonnell with two attachments – the public power point presentation of the Affordable Care Act presented at the February 3 Board Meeting and an email exchange between School Board member Virginia Lastner and a resident. Neither of these items related to the Executive Session ‘behind closed door’ ACA discussions and the outsourcing of the District’s aides and paras. McDonnell’s response to Colligan’s RTK request: 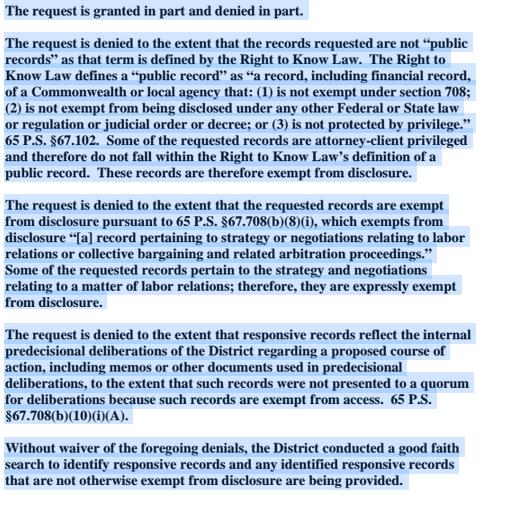 Colligan resplied to McDonnell and the School Board via email on March 27, 2015, noting that that both his first and last name were spelled incorrectly in the response and added that, although his RTK request was made using his personal e-mail address, McDonnell’s response was sent to Colligan’s business email. The remainder of Colligan’s email reads as follows:

Your response and timing of response in this matter is very disappointing to me. I’ve made a number of Open Records requests over the years and this is the second one DENIED. Interestingly, those are the only two responses that took the maximum 30 days to receive. While you are certainly within the boundaries of the law on these responses, I would think a Denial could be formulated much sooner in the process. Water under the bridge….

I was asking for the documents related to the closed Executive Sessions that occurred before the presentation on February 3, 2015 on this year; to the extent they were available and public. What I received (attached) was the Power Point presentation from the 2/3/15 meeting and several e-mail chains between citizens and Mrs. Lastner dated after this critical meeting date. Added to this was your denial that includes three different legal reasons for the denial of the request. Wholly unsatisfying to this member of the community who was as puzzled as the rest of us regarding how a sensitive issue like this could have been made in a series of closed-door Executive Sessions. I was hopeful that some light could be shed on your deliberations and decision-making thought matrix but that is not going to be the case.

It seems you have done a great deal of legal work here although the legal opinion and defenses articulated in your reply likely did not take outside research. I’m sorry if you choose to spend valuable legal dollars just to deny this request. If that was the intent, the response could have been forwarded last month when I made the request for Open Records. The inclusion of post 2/3/15 items was outside of the scope of my request and it is my firm hope that you did not pay for legal review of these (and other post meeting communications) for redaction/exclusion for this Open Records response.

I’m not a lawyer and will not argue your various legal reasons for denying the request. I know plenty of smart lawyers would tell me the counter to each of these defenses but I’m not looking to play that game. I do know that there are many groups/organizations/people/firms dedicated to good and open government in the Commonwealth. I’m also aware that the process for appeal of Open Records denials is a fairly simple and user friendly process…this is to insure that average citizens can shed light on the deliberations of government bodies in PA. I’m very likely to take those steps and seek that help. First I will confer with the other members of our community who supported me in this endeavor. But I ask each of you: Is this the level of openness and transparency that you think appropriate for this issue? Really, when you stood for election to your seat; is this the relationship with the community you wanted? This is not the first time that transparency has become as issue; isn’t there one/some of you who would like to see this relationship change; the School Board become more open in process? I know the answer is YES but we need someone brave enough to voice the opinion and insist on transparent government and it can’t come from the public.

Colligan shared the District’s response to the RTK request and his reply to Art McDonnell (above) with the other signers of the February 13 letter. The District’s response did not support the claim for exemption from public access and those claims are not applicable in this specific case. Although McDonnell states that the RTK was granted ‘in part’ — neither of the two records provided are germane to the request. The District’s RTK denial request contained provisions for an appeal to Pennsylvania Office of Open Records, part of PA Department of Community and Economic Development, within fifteen business days.

On March 28, 2015, Colligan took the next step in the process and filed an appeal with the Pennsylvania Office of Open Records office. He provided requested background documentation, including copies of the original RTK request, response and records from the District. The case, Colligan v. Tredyffrin-Easttown School District, Docket No. 2015-0442 is assigned to Appeals Officer Jill Wolfe, Esq. in Harrisburg. Colligan is required to provide all supporting information and a legal argument by Wednesday, April 8 to the Open Records Office. A final ruling on the appeal will be made within 30 days.

Transparency in government is not a new issue. John Adams, 2nd president of the United States, wrote, “Liberty cannot be preserved without a general knowledge among the people, who have a right and a desire to know.” Through his Right-to-Know request and his open records appeal, Neal Colligan is asking for transparency and easily accessible information which should be public information. He is not looking to unearth government secrets … simply asking for public information.