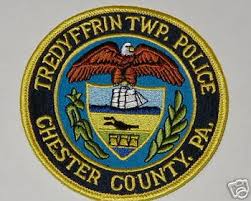 Some residents, including myself, have been wondering when the township was going to hire the additional police officers listed in the 2013 budget. Last year’s $49K police operations study by ICMA fueled some ongoing debate as to how many police officers were needed. According to the consultants, their study recommended 43-46 officers with a minimum of 43 officers required to maintain the existing level of safety. If you recall, Police Superintendent Tony Giaimo requested 47 officers at the December 3 supervisors meeting and asked the Board to consider reinstating the 47 officers in the 2013 budget. However, the 2013 township budget was approved with 43 officers. (Three years ago, Tredyffrin Township had 51 police officers on the books.)

In late December 2012, the Act III arbitration award was issued for the collective bargaining agreement between the township and the police union. Based on the arbitration award, the police department retained most of their prior contract benefits. I incorrectly assumed that the arbitration award settled the matter and that the hiring of additional police officers would be immediate. However, we learned that there remained open issues related to the police health care plan requiring resolution. However, last month the outstanding health insurance questions were resolved and the township and the police union signed the agreement.

With no further roadblock to hiring new police officers, there’s great news that the agenda for Monday’s Board of Supervisors meeting includes, “A motion to approve the hiring of additional police officers”. At my last count, there were 39 township police officers, so it will be interesting to see how many are approved tomorrow night.