The Board of Supervisor’s organizational meeting includes the adoption of the meeting schedule for the various township boards and commissions, naming of emergency service providers, adoption of township fee schedule, legal and accounting reviews, etc.

One of the interesting aspects of the organizational meeting each year is the naming of the Chair and Vice Chair of the Board of Supervisors. The seven Board members nominate and vote on these positions. Historically, these positions go to the longest-serving members on the Board. However, in 2012, that tradition shifted with the naming of Michelle Kichline as Chair. Kichline had only served 2 years as supervisor and neither as a Vice Chair, but received the unanimous support of her fellow board members for the chair position. Having served longer than Kichline, many had expected John DiBuonaventuro to receive the 2012 nod for Chair but instead he served as Vice Chair. The Board of Supervisors saw their share of controversy in 2012, so it will be curious to see if Michelle receives another vote of confidence to continue as Chair and JD to continue as Vice Chair.

After the ceremonious organizational meeting, there is a regular supervisors meeting, including a Public Hearing to “consider and enact an ordinance of the Township of Tredyffrin, Chester County, and the Commonwealth of Pennsylvania, fixing rates of taxation for the year 2013.” We learned at the last BOS meeting in December that the township tax increase is set at 3.1%, down from the 5.5% originally forecast.

Since the December 17th supervisors meeting, we have learned of the Act 111 Arbitration Award issued for the collective bargaining agreement between the township and the police union. Much has been written about the agreement on Community Matters with many comments. If you are interested in details of the 4-year contract (2012-15), I would suggest you review posts from late December. Once the arbitration award was announced, I submitted a right-to-know request for a complete accounting of the arbitration related expenses paid by the township. It should be noted that this is the second police contract in a row that has gone directly to arbitration by the township. In both instances, the impartial arbitrator came down on the side of the police union in regards to the post-retirement benefits. We know that retirement benefits , including pensions and healthcare, were major contributors to the long-standing debate between the two sides.

According to township manager Bill Martin, the arbitration costs to the township (taxpayers) re the police contract is as follows – Michael Zobrak, impartial arbitrator $14,136.46 and township arbitrators John McLaughlin, Patrick Harvey, Brian Pinheiro, etc. billed 273 hours for $69,337.50. If my math is correct, the taxpayers paid $83,473.96 for the arbitration of the police contract.

Below are the details that Bill Martin sent for the township arbitrator costs. John McLaughlin, Patrick Harvey and Brian Pinheiro are all partners in the Philadelphia law firm of Ballard Spahr. The law firm billed the township 273 hours for a total of $69,337.50 which equates to $254/hr on the average. On April 3, 2012 there are 100+ hours billed to the township under the name, ‘PFM’ — I am clueless as to what that means but I will contact the township manager for clarification.

I am struggling to understand these billable hours from Ballard Spahr. It was my understanding that there was little (if any?) movement from the township’s initial position going into the arbitration process. If that is the case, how is it that the total number of hours in 2012 (setting aside the hours from 2011) are so substantially higher than the total billable hours of Michael Zobrak, the impartial arbitrator.

Something else I should point out is that on my right-to-know request in which I asked for ‘costs to date’ was dated January 1, 2013 and Martin’s response was dated January 4th. If you look at the last billing date from Ballard Spahr (below) it was back on Oct. 18, over 2 months prior to the signing of the arbitration agreement on December 23, 2012. It stands to reason that there are additional billable hours yet to be received from Ballard Spahr for those 2+ months, including the review of the arbitration award before its release. I would maintain that the township has not seen the end of the costs — $83K may not be the entire costs. 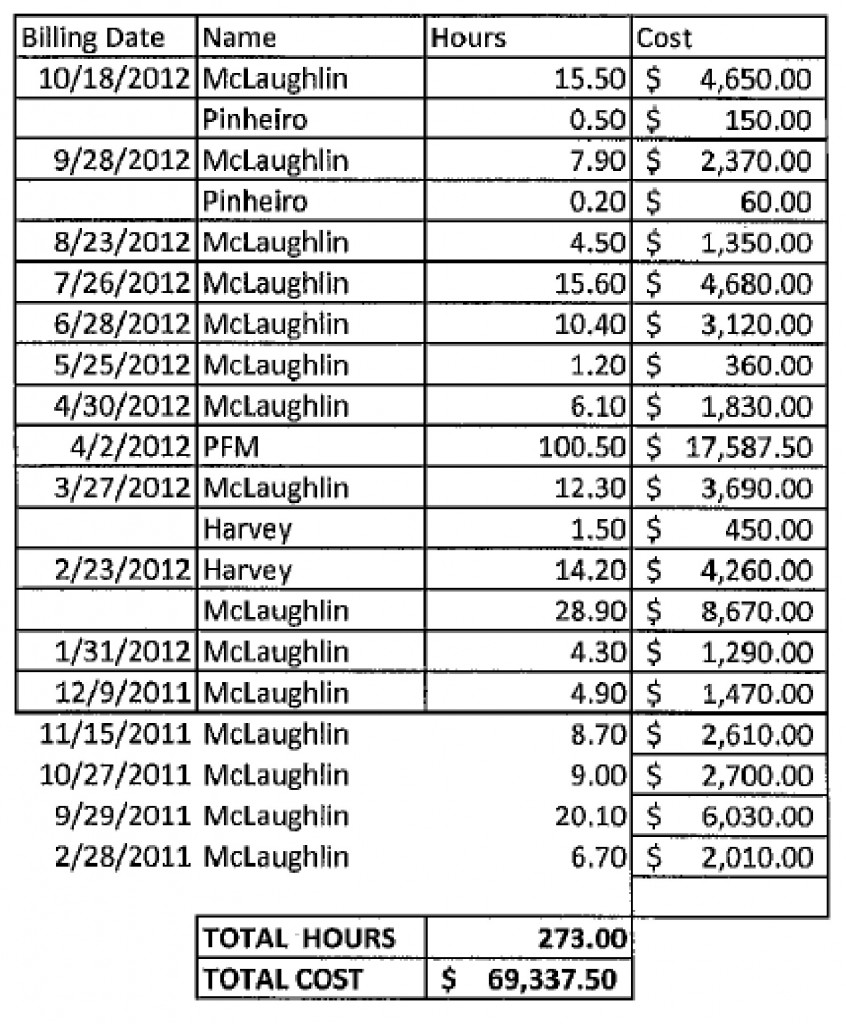 I would suggest that we should also add the ICMA (International City/County Management Association) police department consulting fee of $49K to the total cost of the police contract negotiations. Much of ICMA’s report was boilerplate language and their specific, cost-savings suggestions would require collective bargaining changes. The way I see it, the township has already spent approximately $133K trying to lower police department expenses. Based on the arbitration award, we know that the police department retained most of their prior contract benefits.

What bearing is the Act 111 arbitration award going to have on the township’s 2013 budget? The supervisors and the finance director Tim Klarich did not have the benefit of a crystal ball in regards to the arbitration award when they calculated the 2013 budget. In addition, we still have the issue that there were 47 uniformed police in the 2012 township budget and the 2013 budget has the number reduced to 42. The 42 uniformed police officers is two more officers than are currently in the department. Now that the police contract is settled, will the supervisors OK the hiring of those two additional officers?