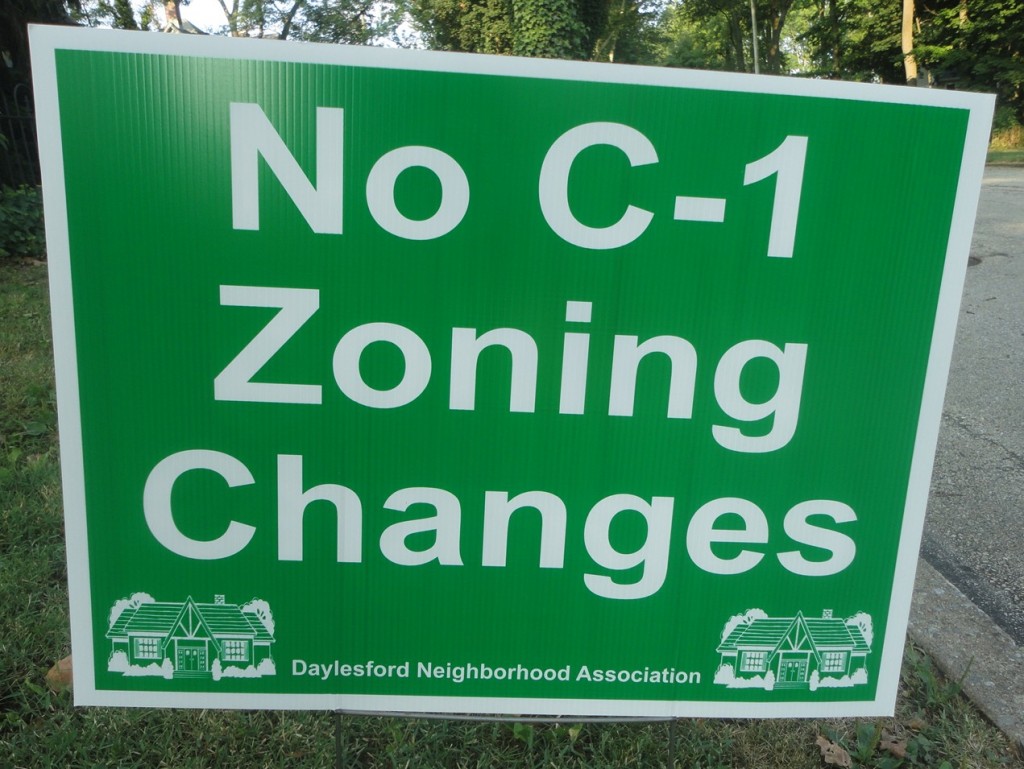 Residents from the Daylesford neighborhood made their opinions known at last night’s Planning Commission meeting. With the exception of one person, all others in the Daylesford community spoke against the proposed C1 zoning ordinance change and the assisted living facility plan for the old Jimmy Duffy catering site.

The president of Daylesford Neighborhood Association, Trisha Larkin, presented a powerful 20-min. power point presentation, which explained the timeline to date for the C1 zoning ordinance change and the rationale behind the resident’s objections to the proposed assisted living project. It was obvious from their reaction, that some audience members and Planning Commissioners were not fully aware of the timeline and ‘how in the dark’ the most-effected neighbors were in regards to this proposed project. (Click here to review the timeline.)

A couple of things were striking about the comments from Larkin and other Daylesford community members … R.E.S.P.E.C.T. I have attended many Planning Commission meetings and often neighbors become very vocal in their opinions, and at times disrespectful to the planning commissioners, staff and/or applicants. Not so last night. A steady stream of residents offered their positions on the proposed C1 zoning change; their comments delivered with the utmost respect. Although the vast majority of residents were either opposed to changing the C1 zoning to permit an assisted living use and/or asked for additional restrictions to be added to the zoning change, those choosing to comment did so with respect for the developer, his attorney, township staff and Planning Commissioners.

The other striking theme to the discussion on the proposed assisted living project was the process itself. The planning commissioners acknowledged that they have been working on this project with the developer Ed Morris of Berwyn Real Estate and Gerald Farrell of Capital Health Service, for over 2 years. Yet the residents most-effected by the proposed assisted living facility only found out about in January of this year. By the time the Daylesford Neighborhood Association were aware of the proposed C1 zoning change, Morris and Farrell along with their attorney Denise Yarnoff, had attended several Planning Commission meetings. Morris openly declared at these public meetings that there was no opposition to the project from the neighbors. Resident after resident pointed out, they could not support (or oppose as is the case) a project that they knew nothing about. Unfortunately for Mr. Morris, he misspoke when he portrayed the neighbors supported this project … as evidenced last night, nothing could be further from the truth.

In addition to Daylesford neighbors, the proposed C1 zoning ordinance change brought questions and concerns from other township residents in attendance. Berwyn resident Andrea Felkins asked about the definition of ‘assisted living’ versus ‘personal care facilities’ … how was it defined in the municipal zoning code, what was the difference? Her questions hit a cord with Planning Commissioner Ed Sweeney who in his remarks, referenced Felkins question, and asked for clarification from township staff and/or solicitor for the August Planning Commission meeting. Andrea offers further explanation as follow-up to her comments given last night:

The C1 Ordinance Amendment draft describes the additional use as “A residential care facility for older persons providing permanent residential accommodations and/or assisted living facilities/services (and supplemental services) as defined in the applicable Pennsylvania state statutes, rules and regulations along with support services, which may include, but not limited to: personal care and health care services, medical services, skilled nursing, community facilities, and congregate dining facilities; provided that the property shall have direct access to an arterial street.”

In contrast, a very preliminary search of regulations for PA provides this language:

“What is the difference between an Assisted Living Residence (ALR) and a Personal Care Home (PCH)?

ALRs are different from PCHs in 3 ways: concept, construction and level of care. ALRs embody the concept of allowing a resident to “age in place” without having to move to a licensed long-term care facility when their needs increase.

The construction of an ALR is different from a PCH. PCH residents live in bedrooms that may be shared by up to 4 people. ALR residents will have living units with kitchen capacity. No one will be forced to share a living unit. Living units will have a door with a lock and a private bathroom. This housing-service model will allow for privacy and maximum independence. It is similar to a studio apartment where the resident can make meals if desired and have a private bathroom.

The level of care provided in an ALR is distinguishable from a PCH, offering another choice of long-term living options in the commonwealth. A person who needs the level of care of a nursing facility is not permitted to reside in a PCH and must transfer when their needs become too great. That same person, however, will be able to live in an ALR where they’ll be provided with the services they need to age in place. “

Even on its face, the ordinance amendment makes no distinction about which purpose the property intends – stating only that it will follow the applicable state statutes. No statute is identified … I’m not a real estate lawyer, but with this lack of specifics, this amendment seems to broadly define a use. Likewise, unless “arterial street” is a defined term in our zoning codes, then any C1 property would be free to build any quality or size of facility. I’m not suggesting that is what is intended, but when we write laws/rules/ordinances/amendments, I think a bit more clarity would be prudent.

Tredyffrin Township solicitor Vince Donahue provided an opinion letter in regards to the grandfathering usage of parking on the 1-acre R1 parcel of the Duffy property. Although the Jimmy Duffy property has remained abandoned for several years, Donahue is of the opinion that the nonconforming use of parking remains available to the owner. Paoli resident and attorney John Petersen disagrees with Donahue’s opinion, believing the nonconforming use of the R1 parcel for parking has lapsed and offered his comments to the Planning Commissioners last night. For the assisted living project to ‘work’ on the Jimmy Duffy site, it requires the 1-acre C1 parcel plus the continued use of the R1 parcel as parking. In an effort to better understand Petersen’s position on the Jimmy Duffy development project, I asked him for clarification. Here are his comments …

In my opinion, Ed Morris’ contemplated development of the old Duffy’s Catering site is dead in the water for several reasons. 1 – And this is a preliminary point that focuses on the general lack of process and procedure around this particular plan. 2 – Which builds on point 1 above, this is effectively become a spot zoning/contract zoning issue. 3 – The pre-existing non-conforming use of the R1 parcel for parking to support the C1 use has lapsed – which itself is a fatal blow to the project.

On one hand, the PC wants to see the site is used. On the other hand, the PC wants to be comfortable with the use. In last night’s proceedings, it was far from clear how the PC and the BOS could let things get this far. Trish Larkin’s presentation (which by the way I was happy and honored to have input on) made crystal clear how problematic the situation is. What was clear from last night’s meeting was that the PC was giving great weight to the developer, their time, money spent, and almost no consideration to impacts of the zoning change or the needs and concerns of the citizens. To suggest that a “Super Wawa” could go there is a false choice. First, that is a use of right. Second, it is an entirely inappropriate comment to make by Ed Sweeney. The absurdity here is that a legal use is being subordinated to a non-permitted use. Again, it is entirely inappropriate for the PC to consider the money spent by a developer – unless of course – this is really a contract.

The stated reasons in previous paragraph outline a process that is unreasonable and arbitrary. It is unreasonable to the extent the way the needs of the developer appear to be the only areas of concern. There is little to no consideration of the broader zoning impacts. The only consideration appears to be for this developer, this project and this parcel of land. The arbitrariness goes to the general lack of process. The extent of un-reasonableness and arbitrariness are direct factors that go to determine if spot zoning is in fact, present. One can argue that in reality, there is a contract here – which gives rise to a contract-zoning case.

Perhaps the bigger issue is the R1 parking and whether it is grandfathered. There are four reasons why Vince Donahue’s analysis in his opinion letter is flawed:

The conclusion in Mr. Donahue’s opinion is that the zoning officer “Could not reasonably conclude that the use has lapsed.” In fact, I just gave a number of reasons why Matt Baumann, our zoning officer, could reasonably conclude that the use did lapse. In fact – I’d say that based on these facts – Baumann couldn’t reasonably conclude the use didn’t lapse. If the township tries to grandfather this use, that itself could be a prima facie case of contract zoning – which is always construed to be spot zoning. Ironically, where the PC and at least some on the BOS thought they were helping this project along, they actually did more to harm it by not following sound process and procedure.

By the end of the evening, it became apparent to the Planning Commissioners that there were too many unanswered questions surrounding the C-1 zoning ordinance change for them to feel comfortable taking a vote to move the proposal forward to the Board of Supervisors. The applicant’s attorney agreed to add restrictions to the proposed text amendment and re-submit at the August Planning Commission. In the meantime, the township staff will work on finding answers to the questions asked by the Planning Commissioners and residents, including a review of other municipal zoning ordinances that govern assisted living facilities.

I caught up with Trisha Larkin today — curious to know what the DNA president and her neighbors thought of the Planning Commission meeting. She offers her thoughts below …

Thank you to the Members of the PC, along with the many Tredyffrin residents, and DNA members that participated in a respectful and thoughtful dialogue about the proposed C1 Ordinance Amendment.

DNA members articulated their concerns that the Township could set major negative precedence for changing ALL of the Township’s C1 zoning for this ONE developer, for this ONE project, on this ONE space. We fully agree with Mr. Lukens that as our population ages, we shouldn’t have to leave Tredyffrin in order to find a suitable Assisted Living Facility. However, we respectfully request that the PC give a comprehensive analysis as to why Assisted Living use in C1 is a good idea. The goal should be to have consistent and compatible uses that meet the needs of ALL residents. If the PC recommends that Assisted Living use should be added somewhere OTHER than in the Institutional Overlay districts – ONE THING CLEAR – Tredyffrin has ONE shot to “get it right“.

The DNA was thrilled and grateful to the Planning Commission for delaying the vote last night and opposing the Ordinance Amendment with no restrictions. We appreciated that the Applicant was asked to “go back to the drawing board” and place conditional uses/special exceptions/regulations. Rushing this decision comes with a high cost, and careful deliberation is required. As it stands, the Supervisors delayed the Public Hearing until the September 17 meeting. The PC has a daunting task to exhaust all possible options by that deadline.