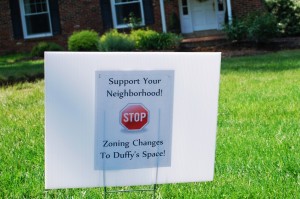 UPDATE May 8, 2012: According to the township zoning officer, Matt Bauman, the Jimmy Duffy property is not 2 acres C-1 Commercial and .3 acres R-1 Residential as was stated by Ed Morris, the developer for the proposed project.

The property is a total of 2.069 acres containing 1.069 acres of C-1 Commercial and 1 acre of R-1 Residential. If the commercially zoned part of the site was 2 acres as previously stated, the developer could probably just ask to change the C-1 zoning. But now it appears that Morris would need to ask for variance on both the C-1 and R-1 sections.

Taking the ‘amending the C-1 Commercial ordinance route’ to include assisted care facility would suggest that it is OK to construct this type of structure on 1 acre rather than the 10 acre minimum as is currently required under IO Institutional Overlay zoning district. The Jimmy Duffy property actually only contains 10% of the property currently required for an assisted care facility.

It has been 2-1/2 months since the players in the Jimmy Duffy’s redevelopment project last met publicly … but this Wednesday, May 9, 7 PM at the Tredyffrin Township Building, they will take up where they left off with a town hall meeting. What’s changed with the proposed plans for a multi-story assisted care facility? I don’t know if any of the plans have changed from the developers-side; it’s more about the fact-finding that has occurred with the Daylesford neighbors. I will get to that, but first here is the abbreviated history on the project.

The decaying catering facility that once housed Jimmy Duffy’s is on Lancaster Avenue in Daylesford. The 2.3-acre property is wedged between the Paoli Vetcare (the 2 properties share a parking lot) and a large new office building. On and off over the years, the property has seen its share of redevelopment interest but most notably the 2006 proposed Arc Wheeler townhouse community. That proposal, ‘Station Square’, called for the teardown of 14 single-family homes (in addition to Duffy’s) and the construction of 150+ residential units and retail space. With much backlash from the neighboring Daylesford homeowners and many heated discussions, the developer eventually decided against further pursuit of that project.

Several years passed without any new suggestions for the Duffy site until last fall. In September 2011, Capital Health Service and the project’s developer Ed Morris, presented sketch plans to Tredyffrin’s Planning Commission to redevelop the property as a multi-story assisted living facility. Planning Commission minutes from September and October 2011, and January 2012 Board of Supervisors meeting minutes reference the discussion. Here’s the sticky wicket for Capital Health and Ed Morris – the 2.3 acre Duffy property consists of 2 acres of C-1 zoning and .3 ac of R-1 zoning. The C-1 Commercial District does not permit an assisted care facility as a usage; nor does R-1 Residential District.

The township does have zoning that permits residential care facilities – Institutional Overlay (IO) but the proposed Jimmy Duffy project would not comply with this ordinance – why? The answer: An IO zoning district requires a minimum of 10 acres and the Jimmy Duffy site has 2 acres. The applicant for the project could ask for a variance to the IO zoning, but 2 acres is not exactly close to minimum 10-acre requirement. Under these conditions, would the township Zoning Hearing Board grant this type of variance request? My guess is that Capital Health Service and Ed Morris figured that their best shot at getting this project approved was to have the C-1 zoning district amended to include an assisted care facility as an acceptable use.

What’s the saying, the devil is in the details. At the February 23 public meeting between the Daylesford Neighbors Association (DNA), Capital Health Service representatives and Ed Morris, the detail that the project’s success hinged on a zoning ordinance amendment change was not an obvious part of the discussion. The Daylesford neighbors focused their concerns on the height of the proposed building, lighting, traffic, trash, etc. but most attendees missed the greater issue – that a residential care facility was not permitted in C-1 zoning and that there was not sufficient property for IO zoning (remember, IO requires 10 acres and there’s only 2.3). I admit that like the Daylesford neighbors, I too missed (or overlooked) the significance of what this project would require … the zoning amendment change. To say that the developer’s discussion at the February 23 meeting was ‘incomplete’ would be an understatement.

Fast forward since February and DNA residents have gone on a fact-finding mission to educate themselves on local zoning ordinances, C-1 Commercial, R-1 Residential, IO Institutional Overlay districts, conditional use and variances. As a result, I think that the developer would better serve the neighbors if there were a full and fair presentation of the project at Wednesday’s meeting. Ed Morris should come prepared to explain why the township should grant a C-1 zoning amendment change to include assisted care facility when the township already has the IO ordinance that includes this usage. At 2.3 acres, the Jimmy Duffy property is off by an order of magnitude to meet the IO requirement of 10-acre minimum for this type of project.

Simply stated, the proposed Jimmy Duffy redevelopment project does not match up to the requirements of IO Institutional Overlay zoning requirements and is not currently included in C-1 use regulations.

If the township allows a developer to draft a C-1 Commercial ordinance amendment to fit his specific project, what does that say for future developers in Tredyffrin? Will they too be afforded that same opportunity? It is important for the community to encourage local economic development and redevelopment. However, if a proposed project requires a zoning ordinance amendment, I ask for careful and thorough analysis. Although Wednesday’s town hall meeting is intended for those directly involved in the Jimmy Duffy redevelopment project (Daylesford neighbors, Capital Health Service representatives and the developer, Ed Morris), the ramifications of the actions taken in regards to this project are far-reaching for all future township development.

Trisha Larkin, President of Daylesford Neighborhood Association (DNA) and her neighbors are circulating a “Petition to Oppose Ed Morris Proposal for Assisted Living Facility on Duffy Site”. Click here for copy of petition. According to the petition, the neighborhood members further state that “DNA opposes any FUTURE proposals that require zoning changes” for the Jimmy Duffy property.