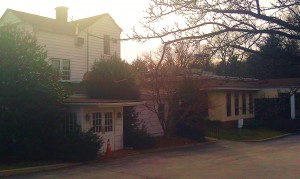 The old Jimmy Duffy’s catering facility has sat empty on Lancaster Avenue in Daylesford for several years. It is an odd-looking building that previous owners added on to as their catering business grew.

Wedged between the Paoli Vetcare and a large new office building, the Duffy property has seen its share of redevelopment interest over the years. Back in 2006, Arc Wheeler proposed a townhouse community, ‘Station Square’ that would stretch along Route 30 between Glenn Avenue and Longcourse Lane in Daylesford. The plan was to take fourteen existing single-family homes plus Duffy’s and turn them into 150+ residential units plus retail space. The plan created much backlash from the local Daylesford homeowners and many heated discussions, the developer decided against further pursuit of that project.

Since Arc Wheeler’s redevelopment plan for the Duffy property, several years went by without any new suggestions for the site. Then last fall, I was at Planning Commission meetings in September and October when a sketch plan for the property by the applicant, Capital Health Services was presented. The plan would redevelop the former banquet hall into a residential care – assisted living facility. For the record, the September and October 2011 Planning Commission meeting minutes indicate that the applicant had spoken with Daylesford neighbors of the Duffy property.

As explained at the Planning Commission meeting in October, the proposed assisted living facility would require a zoning ordinance change. The current C1 zoning district of the Duffy property does not permit an assisted living facility nor does it allow for a 5-story structure. The interesting point is the Planning Commission minutes in October reflect the following, “Denise Yarnoff, Esq., representing the applicant, stated that the applicant had met with neighbors of the proposed facilities and the project type and proposed building heights have been well-received.”

On January 3, 2012, the township supervisors received an update on the Duffy property from a Planning Commission representative on the proposed redevelopment plans for a 5-story assisted living facility. The January Board of Supervisor meeting minutes reflects the following, “The developer has had favorable response from the neighborhood behind the site and has not received any neighbor opposition.” The minutes also state that supervisor “DiBuonaventuro added that there have been no negative comments or resistance from the community for this proposal.

I remember thinking as I attended the fall Planning Commission meetings and the January Board of Supervisor meeting that it was surprising that no Daylesford homeowners attended either to show support for the project or to voice concern. How was it possible that the local Jimmy Duffy neighbors who had loudly opposed the townhouse project a few years ago, were now quiet and accepting of the proposed plans and required zoning changes? Well, the answer is that until about three weeks ago, many of the Daylesford homeowners had no idea of the Capital Health residential care – assisted living project.

As this redevelopment plan has moved through the Planning Commission and to the Board of Supervisors for discussion, at least some of the immediate neighbors to the project were not notified; although the project applicant and their attorney stated otherwise. Not only was it stated that the neighbors were notified, the applicant gave the impression that the neighbors were supportive. Although at both the Planning Commission meetings and the January Board of Supervisor meeting, it was stated that neighbors were contacted and the project had their support, I have received emails and phone calls from members of the Daylesford Neighborhood Association that would say otherwise.

I am a proponent for redevelopment and certainly Jimmy Duffy’s vacant building, now owned by the bank, is a prime location for such a project. To maximize the potential for a successful redevelopment project such as what is being suggested for the Duffy site, it would make good business sense for the developer to engage and get ‘buy-in’ from those most affected – the neighbors.

Because the existing support (by the neighbors) for the Duffy redevelopment project may have been somewhat ‘stretched’ by the applicant and his representatives, the neighbors are now upset and do not understand how the project could be so far along without their knowledge. A zoning ordinance change requires notification to local neighbors but proposed plans to the Planning Commission do not. (It should be noted that a residential care – assisted living facility is not currently a permitted use in C1 zoning district.)

The neighbors have many questions about the proposed facility and zoning 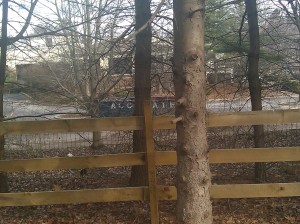 change – height of building, footprint of the structure, lighting, screening, traffic, etc. As an example of the frustration, the Larkins home on Pennsylvania Avenue sits directly behind the Jimmy Duffy site and the owners were never notified of this project. A few trees and a splint rail fence is all that separates the Duffy building from the Larkins property. Last summer the Larkins added a swimming pool to their backyard, which may now by in the shadow of this proposed large assisted care facility. It is easy to understand their concern if this redevelopment project has patient windows overlooking their family backyard activities.

But this is not just about one family, and their possible loss of privacy. The project needs to be fully vetted by the community members that will be most affected by the proposed zoning change required in this redevelopment project. It’s not to say that the project cannot move forward but it needs to be with the full knowledge and understanding of the plan by the Daylesford homeowners.

Ed Morris of Morris Realty Advisors, developer for the proposed Jimmy Duffy redevelopment project is meeting with the homeowners and interested members of the public tonight, 7-9 PM at the Carriage House at the Upper Main Line YMCA.

An update on the C1 zoning district change that would be required to permit a 5-story building at the Jimmy Duffy site — It is my understanding, that Ed Morris has notified one of the Daylesford homeowners that he is reducing the height of the proposed structure to comply with the current C1 zoning height restriction.