SEPTA announced that due to insufficient funding from Washington they would be forced to cut $110 million from its capital budget starting July 1. Back in June, I compared the financing and future of the Ardmore Train Station redevelopment project and the Paoli Transportation project. (see Will Ardmore Transit’s Funding Issues Impact the Future of Paoli Transportation Center?) At that time, the developer Dranoff Properties and Lower Merion officials were concerned but optimistic that the money troubles would be resolved and that the project would continue to move forward.

However, it looks like the difficult economic times continue to rear its ugly head. This week, SEPTA announced their 2011 budget decision to remove $10 million in capital fund assistance from the Ardmore Train Station project. This latest negative news is leaving the future unknown for the Ardmore redevelopment project. As recently as this past August, Lower Merion received a $9 million RACP (Redevelopment Assistance Capital Project) grant from Gov. Rendell towards Ardmore’s $35.65 million project.

If you recall, Ardmore’s redevelopment project is much more than simply improvement to the train station. The project calls for the design of a new mini-main street, including new apartments, restaurants, township building, and large parking garage, in addition to a new train station. It appears that some Lower Merion officials are dragging their feet about continued support for the proposed plan as originally presented. In light of the difficult economic situation and SEPTA’s recent decision maybe the key to keeping the project going forward is a scaled-back version of the original plan, and a specific focus on the train station only? Just an idea, don’t know if that makes sense to the overall design. 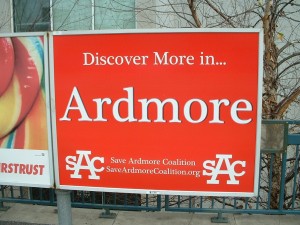 Following on the heels of SEPTA’s depressing news, Carla from Save Ardmore Coalition has presented a positive, upbeat message of support for Ardmore and its business community. Taking a ‘lemon’ of a situation and making lemonade – is the “Discover More in Ardmore” campaign; and just in time for the holidays! I received the following message from Carla . . . one of hope and encouragement!

We believe in Ardmore….not the what ifs of maybe, eventually, possibly redevelopment plans, but the Ardmore of the present.

We love our shops and our residents and our little friendly Main Street.This week you may see our ad in Main Line Times in the gift guide, on Monday our shopping bags done in partnership with Ardmore Business Association are set to arrive at Suburban Office.

Our “Discover More in Ardmore” campaign also goes kind of “support Ardmore” viral today – we have purchased signs at train stations station and they are going up today. We have one sign at each of the following 5 train stations – Paoli, Wayne, Bryn Mawr, Ardmore and Narberth. We hope all get the message:

I noted that Governor Rendell’s proposed additional $1 billion in bonded debt has been countered and reduced to $650 million by State Treasurer Rob McCord. This new debit was earmarked for Commonwealth projects already in progress or that the state had contractually agreed to complete. I don’t know if this money would directly impact the Ardmore redevelopment project.