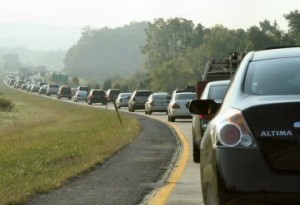 There is an interesting article in today’s Philadelphia Inquirer which gives some of the planned details of the 422 tolling plan. For instance, I did not realize that if the 422 project moves forward, it will become the first locally managed toll system of its type in Pennsylvania.

The politics of the 422 tolling issue continues to remain in the news. On one side are the planners. These ‘visionaries’ not only look at the specific problems of today but also have the job of forecasting the future and try to plan accordingly. The congestion and major traffic problems of Route 422 are not going to magically disappear so than we have the question as to how to pay for the planner’s recommendations.

Many politicians recently won their local elections in Pennsylvania on anti-tax platforms. So now those elected officials in the Rt. 422 corridor are faced with the problem of not supporting the tolling of 422, and struggling with designing a plan to pay for the needed infrastructure improvements. Current funding trends nationwide indicate communities will have to be more self-reliant in the future.

How does the elected official balance what is right for the tax payer vs the funding issue to improve 422’s infrastructure issue?

There might be no more frustrating, dashboard-banging, horn-worthy commute in the Philadelphia suburbs than Route 422’s 25-mile stretch. But are local drivers willing to pay to ease that daily backup? It depends on how you ask the question, regional planners say. The Delaware Valley Regional Planning Commission and a host of local governments have launched a public-relations campaign extolling the benefits of adding tolls to the congested highway.

The DVRPC launched its 422plus website last month to promote the proposal – the result of a $625,000 study funded by the U.S. and Pennsylvania Departments of Transportation and Montgomery, Chester, and Berks Counties.

While it lays out a plan to relieve traffic congestion, many of its details remain undetermined – and whatever is finally proposed would require approval of county and state governments. But the January report is expected to propose a toll of 11 cents a mile. For vehicles with E-ZPass, the fees would be recorded by overhead transponders at four locations. Drivers without E-ZPass would be billed through photos of their license plates.

Traveling the length of the state highway, which runs from King of Prussia past Pottstown to Reading, could cost up to $2.75 one way, according to planners. All of the revenue would be devoted to 422-corridor projects. If granted legislative approval, the project would become the first locally managed highway toll system of its kind in Pennsylvania. And it could mean the difference between completing proposed improvements in 10 years versus the 30 expected should planners wait on state funding.

The 422plus planning group began looking toward locally funded improvements well before this year’s $475 million shortfall in the state’s transportation budget, Fray said. That gap, caused by U.S. rejection of a plan to install tolls on I-80, only drove home the point that waiting for state highway money could take decades. “If we want improvements on 422, we have to control our own destiny,” Bagley said. “If we raise the money, we keep it here.”

Before any of these plans can be enacted, they will need support from local officials. Four county governments would have to vote to create a regional tolling authority. State legislators would have to give it power to toll the road.

And that might be a tough sell given the antitax mood among the electorate. Warren Kampf, a Republican from Tredyffrin, was elected to the state House this month on a platform that in part opposed the tolling plan. His district includes the most heavily used stretch of 422, between Audubon and King of Prussia, where 110,000 vehicles a day pass. “To toll people that are going to work in these difficult economic times doesn’t seem right,” Kampf said in a campaign interview. “The gas taxes, the income taxes, the emission fees, the registration fees, and the turnpike tolls are all largely collected in this area. I believe there’s money within our current revenue.”

Some municipal officials gearing up for elections next year have already taken strong stands on the issue. “I don’t think the situation is going to improve. It’s only going to get worse as more businesses locate out here and more homes are built,” says Sue Padilla, an Oaks business owner, in one of the videos. “If we wait for traditional revenue sources it’s going to be way far down the road.”

Richard Dix, 59, an unemployed machinist from Royersford, said he was willing to do whatever it took to fix what has essentially become a parking lot during the peak of rush hour. He routinely avoids 422 by cutting through side roads. “Make them pay something, and maybe I’ll reconsider,” he said. “That highway’s a nightmare.”