The political signs have gone. The phones have stopped ringing. There are no more calls reminding us to vote or asking who we like in certain races. There’s no one knocking at the door urging us to vote. It’s nice and quiet. What we have left are the victors and the losers. The numbers settle it all, once the votes have been counted.

Locally, the dust has begun to settle post-election 2010. After a heated, and at times very negative mud-slinging campaign between Paul Drucker and Warren Kampf, a victor emerged in the State House 157 race. Warren Kampf will take his new office in January and State Representative Paul Drucker will complete his term on November 30. In the aftermath of any election there is always discussion as to what ‘went wrong’ or what ‘went right’ with the campaign. Campaign insiders are left to ponder the future.

I think it is unfortunate that politics has increasingly begun to feel like a game, but one that is very often played outside the bounds of civility. During this past local campaign cycle, my reaction to both sides was often profound sadness and disappointment. Winning at all costs became the focus, and that it did not appear to matter what it took to get to the winner’s circle. 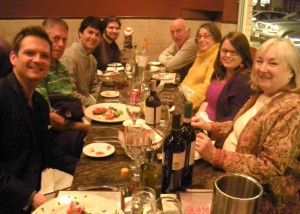 Last night I was picking up Chinese food in Berwyn and walked past the window of Fellini’s Restaurant on my way to the car. In the window, I saw Paul and Robin Drucker and stopped in to say hello. Paul was with some of his campaign staff; my guess is that in the near future, many of these young campaigners will disburse in their separate directions. Looking at the group gathered, I reflected on the idealism and passion of being a political campaigner; and of being 20-something.

Regardless of their associated political party, there is an unwavering commitment to political candidates by the often young campaign staff. These young people have placed an importance on local politics. They support their local legislators with the understanding that these officials make decisions that affect our daily lives. These things matter.

Looking ahead, maybe there is hope for the future . . . that the grassroots optimism and idealism of youth can help create a civic landscape with great vibrancy for which we can all be proud.