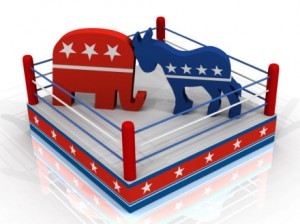 Tuesday cannot get here soon enough! Turn on the television and you are certain to see a barrage of negative campaign ads from various candidates attacking their opponents. With Election Day 2010 just days away, households across America are being attacked by negative political ads. Without an invitation, the negative attack ads are finding their way into our homes, by way of television, robo-calls, on our computers and in our mailboxes.

Everyday someone says to me they cannot wait until Wednesday when it’s over, and Election Day 2010 will be only a memory. The amount of time, energy and money spent on negative sound bites feels eternal… and maybe it is. With unlimited dollars (both domestic and foreign) buying airtime, it takes a persistent and dedicated voter to ferret-out all the paid-for misinformation. People complain and say they hate the ads, the mailers, the political phone calls and the mudslinging that we see in the news articles and the opinion pieces. But they must work. After all, it is amazing how much money is spent on these political campaigns.

Look at the contents of the political ads on TV and in the campaign mailers. The distortion, the exaggerations, the misleading claims – the blatant lies. True or false? Fact or Fiction? Most of the campaign ads are more like half-truths, half-falsehoods – and a lot of embellishment.

But do these negative ads actually work . . . do they influence decisions? I would like to hope that they don’t work and that they don’t influence voters. I want to believe that voters are smarter and more informed and that they rise above the distortions and exaggerations. Unfortunately, psychological research has shown that the brain processes negative information more deeply than positive information. Guess political campaigners support the scientific research and have decided that negative ads do work – at least better than positive ads.

By the time the calendar hit mid-October, the viciousness of the negative ads had picked up momentum. And it is no surprise that the closer the individual race, the more negative the ads. Research suggests that negative campaign ads work even though people hate them. I think the potential also exists that people just get tired of the negative campaign season and that this feeling can actually drive the voter turnout down. Eventually, after being influenced by the candidate’s negative campaigning, is it possible that a voter would just stay home on Tuesday, thinking “why bother?”

Negative ads can have a powerful impact; people tend to remember them. . . . Isn’t that why bad news always enjoys more ‘play time’ on TV than good news. I would bet that none of these ads tells the whole truth – the truth you would accept as a reasonable person. Almost all the negative ads are partial or biased on one way or another or just misleading. In a perfect world, positive ads would have as much an impact as the negative ones. What would happen if someone ran an issue-based campaign with no mention of the opponent and no mudslinging? Would an issue-based campaign ever be possible in today’s society? Would it even work?

Where does all this leave us for Election Day; what is a voter to do? There are no campaign enforcement police making sure everyone is telling the truth. My hope for all of you who hold the privilege to vote is to think for yourself. Do a little research and use that developed human brain of yours. Please try not to be influenced by the negative campaign ads. Your vote is worth more than a nay saying ad or a half-truth campaign mailer.

I hope that residents in our community have enough sense and reason to make logical decisions and can only hope that others beyond Tredyffrin will do the same. I would ask that you stay informed by multiple sources. Think for yourself, beyond what your neighbor, your friend or co-worker favors. Know the candidates and support those who have shown ethical behavior. Exercise your right to vote in a sane, thoughtful manner and make your vote count this Tuesday!