Do political campaign signs make a difference in in election results? Do they influence individual voter decisions? Do how many signs a candidate has, or conversely a perceived lack of signs by individual candidates have any effect on voters?

In driving around the township yesterday, there certainly is a plethora of political signage. At least now, the leftover campaign signs of former Republican Lieutenant Governor Candidate Daryl Metcalfe are no longer alone. Metcalfe came in a distant third in the May primary but his red and white signs remain ever-present in our community 5 months later! Which begs the question, which is responsible for removal of the signs post-election . . . the candidate, the political party, volunteers?

Political signs display grassroots support. When voters display your political campaign signs in their yards, it shows neighbors that they believe in you enough to temporarily alter the landscape of their property. Recognizing the power of that association, does that influence other voters?

Among the traditional campaign signs, I noted a new political sign, ‘Republican for Paul Drucker’. As a Democrat and 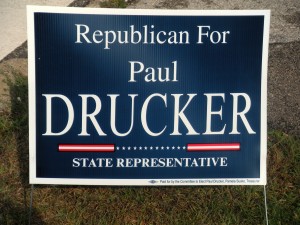 incumbent State House Representative Candidate, Paul is looking to gather support from the registered voters of the opposing party. Do we expect that the Warren Kampf campaign will likewise use signage touting registered democrat voter support? With the growing ‘Independent’ party affiliation among voters, is there signage claiming ‘Independent for Drucker’ or ‘Independent for Kampf’ on the horizon from either candidate?

Voter turnout was very low in the primary and historically Tredyffrin Township has not fared much differently in the general election (especially non-presidential election years). However, with the Governor’s race at stake this year, can we hope for a better than average turnout. Low voter turnouts make is easier for single-issue candidates and candidates with narrow but deep support make a good showing. If you are one of those folks, than you probably don’t want to tell the public when the election is. However, if you are a serious candidate with broad appeal than why not tell the public when to vote.

To inform the voters, and build interest in the fact that there’s an election date coming, why not some signs stating Election Day November 2 or at least on Tuesday, November 2, signs that say “Today’s the day”.

As a registered voter hoping for greater voter turnout, Election Day signage is something that I could support! I’d like to make a suggestion that the township as a public service could set-up those temporary sign boards to notify the public of the upcoming election.