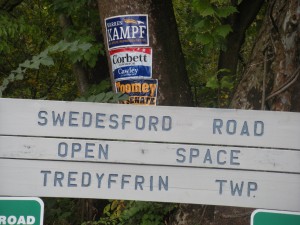 We live across from the Swedesford Road Open Space Park. During the last 24 hours someone either used a ladder or climbed up a township park tree and nailed 3 political campaign signs into one of the trees. We have lived here for 26 years and there has never been signs nailed on these trees. If the trees were on private property and the individual had permission, I guess it would be OK. Although I still would question the damage it may do to the tree. But the point is the tree with the signs is on township open space property.

During the political campaign season, you may see signs along Swedesford Road, particularly on private property or along the sides of the road but never on the park property. I sent an email to the Board of Supervisors asking what the policy was concerning political campaign signs in our township parks but have not yet had a response. If over zealous campaign workers had planted the typical metal campaign signs, you could simply remove them if the signs were in an inappropriate place. But these signs are at least 10 ft. up the tree and would require a ladder for installation or removal.

I do not think political campaign signs should be nailed to trees in township parks. On my email to the supervisors from my husband and I, I copied the township manager, head of public works Steve Norcini and township solicitor Tom Hogan. I asked the policy and asked for the removal of the signs. I do not think the signs should be removed at taxpayers expense nor should it be the responsibility of the township’s public works staff to climb the tree and remove the signs . . . rather, I would hope that the political campaign responsible would remove the signs.

I have not taken a trip around to visit other township parks but I am hopeful there have been no other defacing of township property.