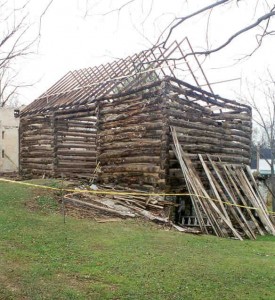 As president of the Tredyffrin Historic Preservation Trust, I am very grateful for Blair’s article in this week’s Main Line Suburban newspaper (below).

The Trust must raise the remaining $200K by the end of the year for this project. As a registered 501c3, all contributions to the Trust are tax-deductible as the law permits. I have always said that historic preservation is the last item on to a budget (whether federal, state, county, local) and it unfortunately in many cases, it becomes the first line listing that gets cut in a budget. Faced with the severity of these economic times, it is not exactly the best time to be Capital Campaign fundraising . . . but if we don’t raise the money, the historic Jones Log Barn will not be a reality. 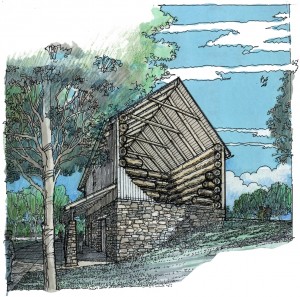 If everyone who is reading this could go to the website, www.tredyffrinhistory.org and make a commitment of $25, $50, $100 (or more if you are able) to the Capital Campaign . . . purchase tickets to the House Tour . . . or buy coffee with our joint effort with Golden Valley Farms, you can help make this 9-year old project a reality for the community! Please help the me by supporting historic preservation.

The Tredyffrin Historic Preservation Trust, established in 2001 to locally teach the importance of historic preservation, continues to work on its original project: preserving and reconstructing the historic Jones Log Barn. Now in its final phase, the project has two obstacles, funding and time.

“In order to make the reconstruction of the Jones Log Barn a reality, the Trust must raise the remaining $200,000 of the total project cost, which is approximately $450,000, before the end of 2010,” said Trust president Pattye Benson. “Along with raising the funding, the Trust is faced with a serious time crunch. The logs being stored at Valley Forge National Historical Park must be removed by Feb. 1, 2011. The clock is ticking and we really need the help and financial support of the community to complete the barn-reconstruction project.”

According to Benson, although nearly half the barn will include the original logs, the township requires the Trust to build the barn as if it were new, including following all of today’s building and stormwater requirements. So far engineering and architectural fees are about $80,000 of the project costs.

The barn, built during the American Revolution, is being preserved due to its historical and architectural importance. The Jones Log Barn project is a testament to the importance of historic preservation in Tredyffrin Township, according to Benson.

“The barn was at one time the site of British Gen. William Howe’s headquarters in 1777 and it is from this farm that he launched the attack on Paoli, which became known as the famous Paoli Massacre,” said Benson. “Also as General Washington and his troops wintered in Valley Forge in the brutal winter of 1777 into 1778, this farm was occupied by Gen. Charles Scott of the Continental Army.”

Along with its historical importance, the barn is thought to have been the oldest intact log barn in the region before 2001, when it was dismantled to save it from demolition.

“This type of barn was once the predominant kind of agricultural structure in Tredyffrin and its neighboring townships,” said Benson. “Constructed within 10 years of the death of Pennsylvania’s founder, William Penn, the 200-plus-year-old Jones Log Barn paints a picture of early Welsh-American architecture.”

Years ago, after members of Tredyffrin Township’s Historic & Architectural Review Board (HARB) proved to the Board of Supervisors that the Jones Log Barn was worth saving, the township agreed to extend a loan of $25,000 in order to dismantle the barn, which has since been repaid. Around this time, the Trust was started and many of its founding members were also members of the HARB.

Since dismantling the barn, which also involved storing pieces of it at both Valley Forge National Historical Park and at the township’s compost site off Cassatt Road, plans were made to rebuild it on the foundation of the Federal Barn on the DuPortail property in Chesterbrook.

“This is another historic barn located next to the home of Revolutionary War Gen. Louis Lebeque DuPortail,” said Benson. “The Trust members thought it was appropriate that the Jones Log Barn be built on the existing foundation where it would be in a more historic setting.”

Now the project is in Phase II; Phase I worked on the foundation and stormwater control.

The Trust is in a capital campaign to raise the remaining funds needed to rebuild the barn, the theme of which is “Saving Our Barn, Building Our History.” As a part of the campaign, many upcoming fundraisers and activities are planned including a fall and spring Lecture Series held at DuPortail House and an annual Historic House Tour.

“This year’s house tour will take place on Saturday, Sept. 22, and will mark the sixth year of the tour,” said Benson. “The event will include tours of eight houses; three are located in Easttown Township and five are in Tredyffrin Township.”

Another annual fundraiser, In the Mood, is planned for Friday, Oct. 22, in the historic stone barn at King’s Grant Farm in Malvern, and will feature a ’50s theme this year.

Once funding is in place, the plan for the reconstructed barn is to use it as a Living History Museum to provide an opportunity to highlight the historical and educational features of the area.

“The barn will complement the work of the Trust to preserve, protect and promote our historic community to residents and visitors of the area,” said Benson. “It will provide a great resource to an area steeped in our nation’s history. The Jones Log Barn will be more than just a renovated barn; it will be a testament to the foresight of a community that treasures its past just as certainly as it ensures its future.”

The Jones Log Barn was deemed eligible for the National Register of Historic Places in 1986 and certified as a Chester County Historical Resource in 2004. Also the DuPortail House and the Federal Barn are both listed on the Register.

“Once rebuilt, the Jones Log Barn will join the Federal Barn and DuPortail House in Chesterbrook as a focal history point in the community,” said Benson. “This place is destined to become a true center for history for generations to come.”

The following are comments from the readers. In no way do they represent the view of mainlinemedianews.com.

” Blair —
On behalf of the Board of Directors, thank you for your well-written and well-timed article on the Trust. Just to clarify, the 6th Annual Historic House Tour is on Saturday, September 25, 1-5 PM. Tickets are $35 and can be purchased at www.tredyffrinhistory.org