I am confident that the people who designed the sidewalks and stormwater management systems on Old Lancaster Road did so with the best of intentions. However, either the design of the bump-outs is flawed and/or the required maintenance by the homeowners is flawed.

I think most residents living along Conestoga and Old Lancaster Roads have been favorable about their new sidewalks. There have been some rumblings about loss of trees, shrubs, etc. but with the understanding that the township will replace their landscaping losses in the fall, I think most have been positive about the sidewalks. Old Lancaster Road has been closed lately, except to local traffic so until yesterday I had not been down this road.

Following the public Sidewalk Committee meeting last Thursday, a couple who live on Old Lancaster Road, in Berwyn between the cemetary and Daylesford Train station spoke about their new sidewalks. They were very positive about the sidewalks and commented that more and more people were using the sidewalks. They had not come to the meeting to complain but rather to inform about a specific aspect of the sidewalk project that most people would probably not be aware. (I certainly was not).

To give a bit of background . . . Old Lancaster Road did not have curbing or appropriate stormwater management system in place. As part of the sidewalk project and stormwater management design on Old Lancaster, 2 foot wide concrete bump outs were installed next to the sidewalks in the road. According to information I found on the township website, the design of the curbed underground seepage/infiltration beds was to control runoff from impervious sidewalks, as well as a portion of the existing roadway runoff on Old Lancaster Rd. which had been uncontrolled. The bump outs were thought to have an additional benefit of traffic-calming.

All of this sounds like a good idea, right? Well, here is some of the problems with the concrete bump outs. First off, the residents on Old Lancaster Road knew that they were responsible for keeping their section of the sidewalks maintained, shoveled in the winter, etc. but were not informed that they would be responsible for the maintenance of the bump outs. (I have now been told that homeowners were informed that the bump outs would be their responsibility.}

There was some concern from some of the elderly homeowners that live along Old Lancaster Rd in regards to sidewalk maintenance; but somehow these residents would get the necessary help to keep the sidewalks cleared and maintained. Clearing sidewalks is one thing but these long concrete curbed areas are in the road are an entirely different matter. How does one manage the maintenance on the bump outs? Here’s a problem . . . there’s curbing on all sides so you would have to pick up your lawnmower and put it in the bump out. But even if you tried that, you would discover the area is too narrow for a lawn mower! So you either have to use hand clippers or a string hedge trimmer on the bump outs.

It is my understanding that township staff planted grass seed in the bump outs but the heat killed the grass seed and apparently there has been mention of wildflowers to be planted in the fall. No grass . . . no wildflowers . . . but even in this summer heat, what does grow — weeds, and lots of them! The weeds in some of the bump outs are 3 ft. high and still growing. As was explained by the couple who attended the Sidewalk Committee meeting, they have elderly neighbors on either side who have to have their grown sons come from Downington and Phoenixville to maintain their bump outs.

One of the overgrown bump outs is next to a side road and could create a visibility issue for drivers entering or exiting Old Lancaster. Interestingly, visibility was one of PennDot’s concerns about the bump out design concept. The Old Lancaster Rd. couple stated that they have attempted to have PennDot help with the bump out problems but were referred to the township staff. The township staff says that Old Lancaster is a state road and therefore the problem has to be taken up with PennDot. Homeowners on Old Lancaster are just going around and around in circles over these bump outs. And how must the residents on the other side of Old Lancaster feel who must look at the overgrown bump outs from their front yards?

Solution? In my opinion it’s simple . . . no way should the ‘care and feeding’ of these bump outs be the responsibility of the residents. Period. My suggestion is that public works staff remove the weeds from the bump outs and then fill these long concrete areas with layers of small river rock. River rocks are very inexpensive, will still permit appropriate stormwater runoff and there is no further maintenance required by homeowners, township staff or PennDot!

One other suggestion – if these bump outs are part of any future sidewalk/stormwater design plan, they should not be the responsibility of township residents.

Below is a photo which shows a bump out that is maintained so that you can see the concrete curbing design and the narrowness of the area. Interestingly, this particular bump out is not a shared bump out but is located directly in front of a resident’s home. 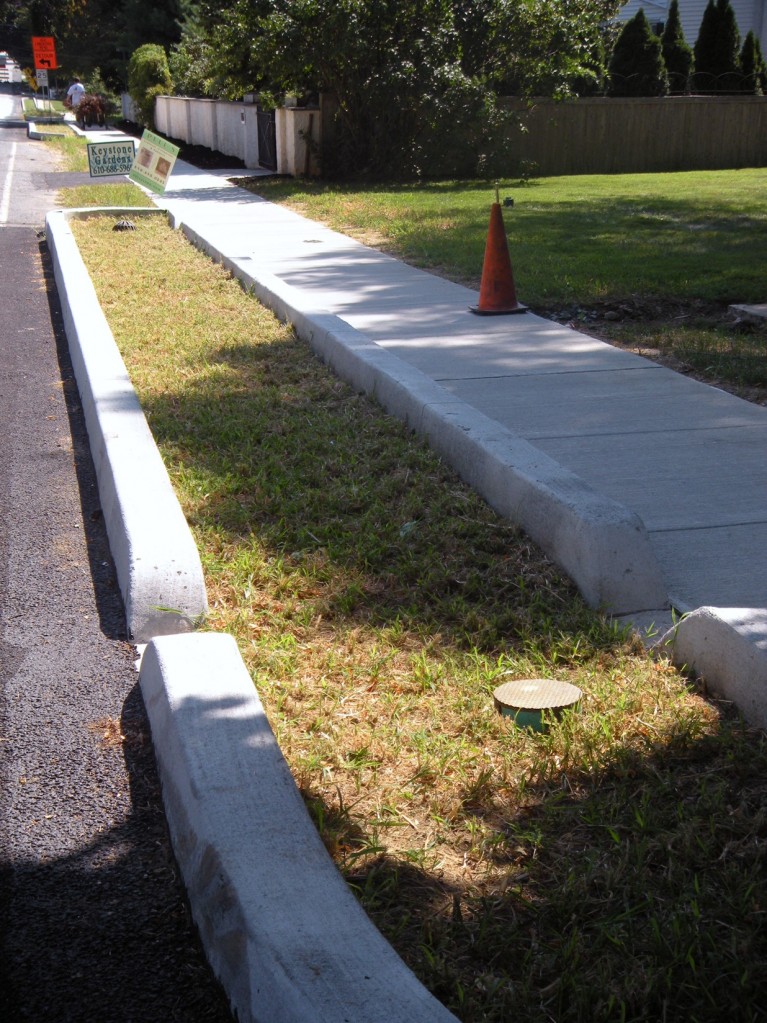 The following 2 photos show overgrown bump outs on Old Lancaster Road – one of the bump outs is now affecting visibility from the side road. It appears that this bump out may be a ‘shared bump out’ – where it crosses the property line of two homeowners. 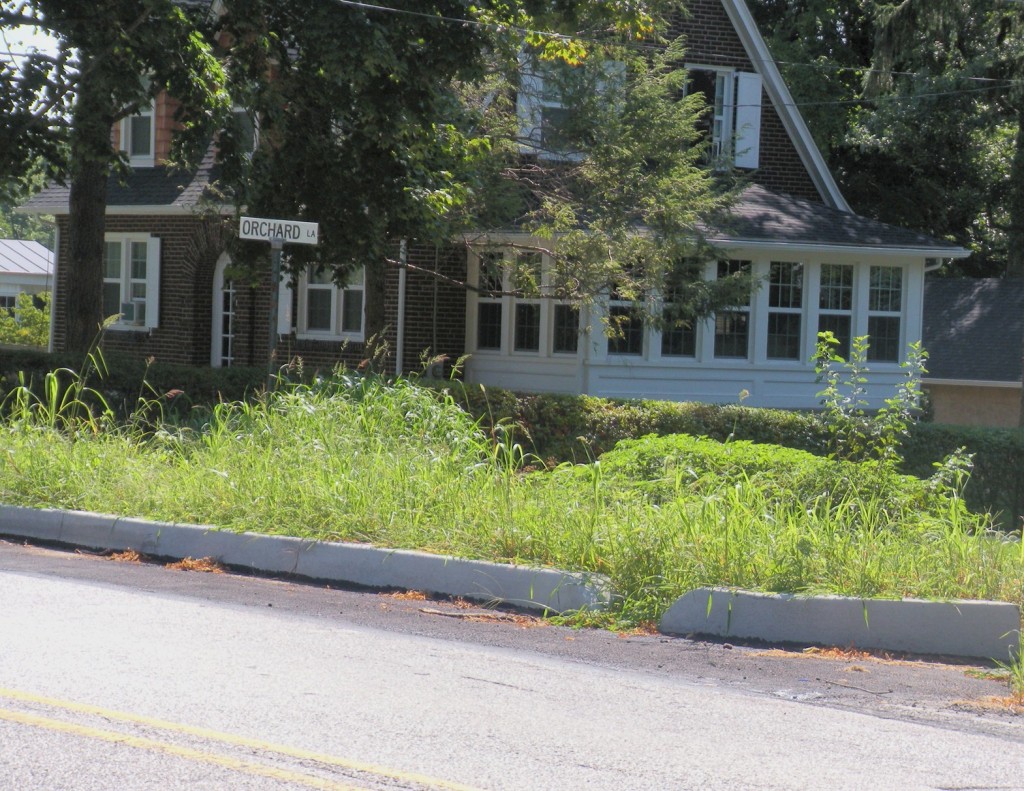 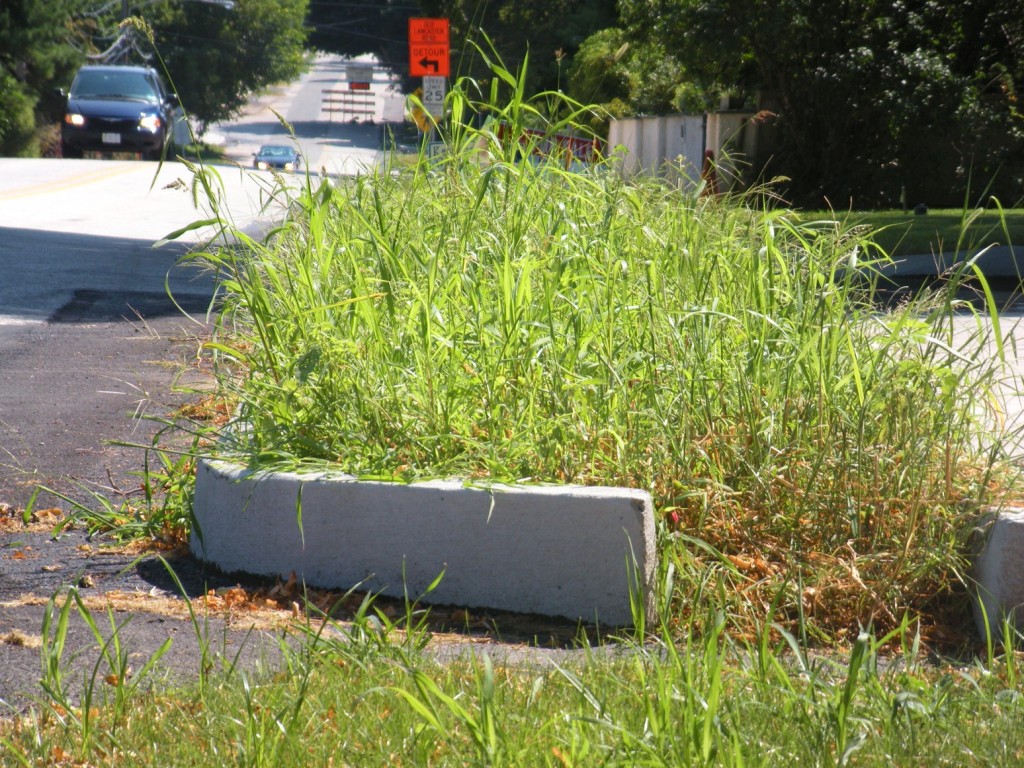