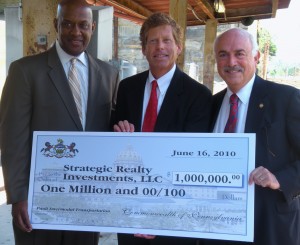 Under the warm summer sun this morning, on the platform of the Paoli train station, those of us in the attendance waited in anticipation for the ‘big announcement’. With the channel 6 ABC news cameras rolling, State Representative Paul Drucker delivered the exciting news that state funding will provide $1,000,000 for the initial phase of the much-anticipated Paoli Transit Center.

Standing with Strategic Realty Investment president Peter Monaghan and House Appropriations Chairman Dwight Evans, D-Phila at his side, Rep Drucker explained to the audience that with this project comes economic growth to the community, including 5,000 construction jobs and over 2,000 permanent jobs.

Today’s announcement signifies a new beginning for Paoli and for the larger community . . . a day to celebrate!

Below is the complete press release for today’s announcement:

“The release of this funding facilitates the initial phase of the most significant public-private multi-modal transit project in the entire Delaware Valley region,” Drucker said. “The solar component of this initial phase, funded by these dollars, reflects the opportunity for our community to reclaim an otherwise unusable contaminated soil containment cell for use as a 400,000 watt solar power generation facility.”

“Today represents the initiation of the larger project that will ultimately create more than 5,000 construction jobs and more than 2,000 permanent jobs in Paoli,” Drucker said. “But most importantly, the building of this solar field will immediately produce 40 new, family-sustaining jobs and offer a boost to our local economy.”

The new Paoli Intermodal Transportation facility is planned to include a new station, passenger amenities, office buildings, and an on-site parking garage.

Funding from RACP is intended to create quality jobs and provide economic stimulus to the Pennsylvania economy.