Back on March 22, there was a town hall meeting in Mt. Pleasant. Residents of the community, representatives from the township staff including Mimi Gleason, Mike Pilotti, Steve Norcini and members of the police department and board of supervisors met for public discussion. The meeting allowed an opportunity for the residents to voice their concerns on a variety of issues, including the long-abandoned vacant lot located at 958 Mt. Pleasant Road.

You can tell by the old cement steps, that there was once a house on the property but what remains on the lot is a mound of crumbled concrete and ever-increasing trash (broken bottles, tin cans, car tires, etc.). According to one of the neighbors, the overgrown lot has now become a haven for rodents and she now has to deal with the rodent problem in her own home. 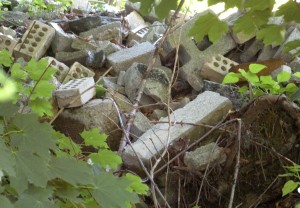 Knowing that the Board of Supervisors were adding discussion of a student housing ordinance to their upcoming agenda, I decided to visit Mt. Pleasant for an update and I am including photos with this post. I will say that the vacant lot looks much better in the springtime; not because it has been cleaned up or that dumping has stopped but because the overgrown lot is now green rather than the deserted, abandoned look in the winter. Nevertheless, the problem remains at 958 Mt. Pleasant Rd.

I have confirmed that the absentee owners of the vacant lot live in King of Prussia. Apparently they bought the lot (with house) a few years ago, immediately took down the house which was in disrepair and intended to sell the lot and make a profit. Unfortunately, the bottom fell out of the economy and the couple has subsequently separated, leaving the lot to become a community dumping area. I have been told that the owners have not been entirely responsive to township outreach although there was some discussion from one of the owners about erecting a 6-ft. chain length fence across the front of the property. This situation on Mt. Pleasant Road is an enforcement issue; I suggest a letter from Tom Hogan, township solicitor might encourage some movement on the part of the owner to clean-up the property, get a fence up and signs to indicate ‘private property – no dumping’ under penalty of law. 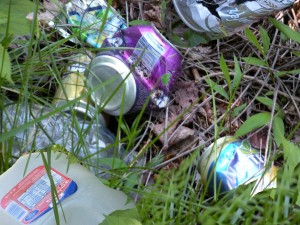 Something else interesting about the vacant lot — it’s located directly across from 961 Mt. Pleasant Rd. which is clearly a college house rental for quite a number of students. This house has a driveway that goes around back of the house with a large parking lot and a commercial trash dumpster. At 2 o-clock on a Thursday afternoon (not Friday or Saturday night!), I found it extremely interesting that there were 7 cars parked in the parking lot behind this house. From the back of the house, there are several exterior doors indicating multiple apartments in this house. Two college girls were on the front lawn in bathing suits enjoying the summer weather. I asked them if they ever saw any dumping across the street and although they had not, it wasn’t a stretch to think that as parties at this college house spill over on to the front yard and in to the street – that vacant lot directly across from this house makes a great disposal for empty beer and soda cans. Here was a direct case where a sign posted for ‘no dumping’ might make a difference.

As long as there will be discussion re the student housing rental ordinance, could we expect to hear about the status of the vacant lot? Also, remind me – is the Panhandle area, (including Mt. Pleasant) covered by Supervisor Paul Olson?