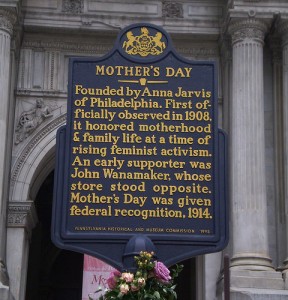 Did you know that the celebration of Mother’s Day in the US has roots tied to Philadelphia? A little history behind today’s special Mother’s Day. Early on, “Mother’s Day” in the United States was mostly marked by women’s peace groups. A common early activity was the meeting of groups of mothers whose sons had fought or died on opposite sides of the American Civil War. There were several local celebrations in the 1870s and the 1880s, but none achieved resonance beyond the local level.

In 1886 Ann Jarvis created a committee to establish a “Mother’s Friendship Day” whose purpose was “to unite families that had been divided during the Civil War”, and she wanted to expand it into annual memorial for mothers, but she died in 1905 before the celebration became popular. Her daughter Anna Jarvis would continue her mother’s effort shortly later.

A small service was held in May 12, 1907 in the Andrew’s Methodist Episcopal Church in Grafton, West Virginia where Anna’s mother had been teaching Sunday school. Anna Jarvis passed out 500 white carnations at her mother’s church – one flower for each mother in the congregation — as they celebrated the second anniversary of her mother’s death. The white carnations were her mother’s favorite flower. But the first “official” service was in May 10, 1908 in the same church, accompanied by a larger ceremony in the Wanamaker Auditorium in the Wanamaker’s store on Philadelphia. She then campaigned to establish Mother’s Day as a U.S. national holiday, and later as an international holiday.