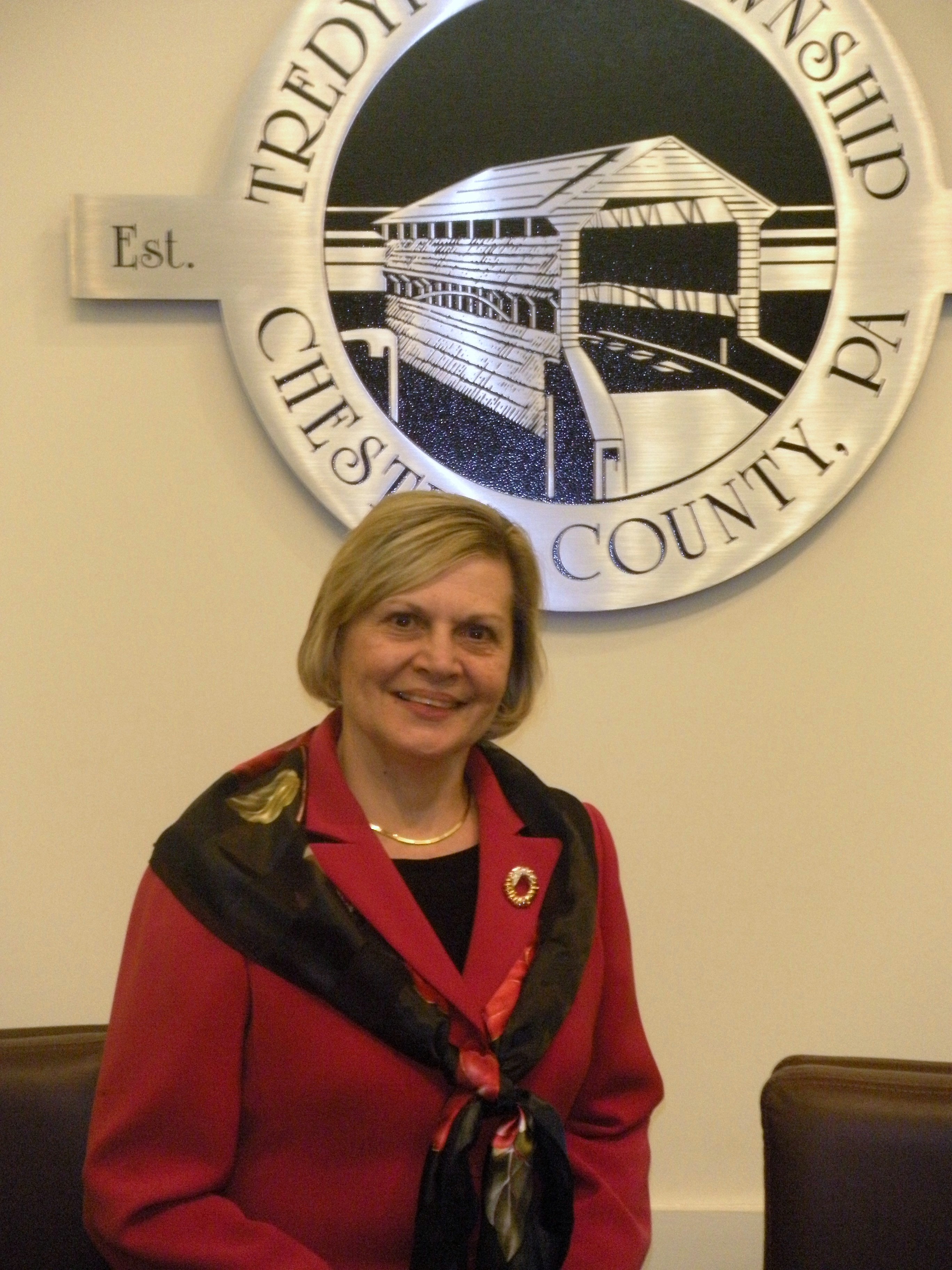 I took this photo of Judy following her last Board of Supervisors Meeting, December 21, 2009. Judy retires having served this community as a Tredyffrin Township Supervisor for 20 years.

For the last 20 years, there was something about having Judy DiFilippo serving as a Tredyffrin Supervisor and sitting on the dais that automatically transformed and demanded respect from others on either side of her. It didn’t seem to matter whether you watched the Board of Supervisors meetings from home or sat in the audience, Judy’s calmness under pressure, her understanding of complicated issues, her ‘calming of the waters’, her integrity . . . we all just knew that it would be OK as long as Judy was helping guide the ship. You may not have always agreed with her decisions but you could be confident that they were made for the right reasons . . . for this community and its residents.

I understand all too well her many attributes, our friendship goes back nearly as long as she served as a township supervisor. Not known to be always calm and patient myself, Judy has been the one constant friend in my life who would listen first, counsel second and never judge my decisions (even if she didn’t always agree with them). I often joked that if our friendship could survive Tredyffrin 300 and the making of the township’s historical documentary, anything was possible. Many of us are challenged by the listening part, but not Judy. For her listening is a natural gift and one she shares with family, friends and our community. Just her presence makes those around her want to be better people.

Going forward, I am wondering how we are all going to feel come this Monday, January 4, 2010 when the person who ‘set the bar’ for 20 years, who created the real ‘gold standard’ for Tredyffrin Township is no longer sitting up on the dais. Yes, of course she will stay involved in our community, and yes, she and I will remain the best of friends, but I fear this community lost something very special when Judy decided to step down from the Board of Supervisors.

Below is an article about Judy’s retirement from the Board of Supervisors by Blair Meadowcroft which appears in this week’s edition of the Main Line Suburban Life newspaper.

DiFilippo leaving board but not community

After serving her community for 20 years as a member of the Tredyffrin Board of Supervisors (BOS), Judy DiFilippo has decided it’s time to move on. Not an easy decision for a life-long volunteer.

“Now seemed like the logical time to step down so that others might have the opportunity to serve,” said DiFilippo. “The decision was not easy, but I know it was the right one.” DiFilippo’s time spent on the board has not only been significant to her but also to the community for which she continues to serve. At the Dec. 21 Board of Supervisors meeting, the last meeting of 2009 and of her term, DiFilippo was honored in many ways by both the board members and residents in attendance. Gifts were given out including a plaque from board chair Warren Kampf along with a certificate of appreciation and a flag that had once flown over the township building from Police Chief Andrew Chambers.

Additionally members of the board and the audience shared memories and words of respect and gratitude for DiFilippo. “I’ve known Judy for 20 years, including 12 spent on the board,” said Supervisor John Shimrak, who was also being honored for his time spent on the board along with fellow Supervisor Mark DiFeliciantonio. “She possesses an uncanny ability to listen to people, agree to disagree when needed and never loses her temper. There is rarely a day she is not spending some time devoted to the township or county. She is amazing in her contributions to the community. Judy, you have set the bar very high for others.”In agreement, Kampf said “there is no more dedicated citizen to the township than Judy.” DiFilippo not only proved to be a dedicated servant to her community but also a good example and a good friend. “You taught me how to be a supervisor,” said Vice Chair Robert Lamina. “You have been a mentor of sorts and have meant very much to me.” Resident Sandi Gorman added, “You taught me how to be a good person, volunteer and neighbor.”

Overwhelmed by the gestures and comments made, DiFilippo was brought to tears at her last-ever BOS meeting. “I can’t thank you all enough for your gifts, time and these special moments,” said DiFilippo. “I have served with 18 different individuals during my time on the board and each has brought something different to the board and to my life. I love Tredyffrin and it has been my pleasure to serve.”

While those who got the chance to know DiFilippo saw her as someone who chose to go above and beyond the call of duty, she explained, “I always just did what I thought the job required.” “It was heartening to hear that others admired and appreciated those efforts,” said DiFilippo. “I was extremely humbled by the remarks made. I knew that my ‘last meeting’ would happen but I was not quite prepared for the emotion of that moment.”

Looking back, DiFilippo remembers first deciding to join the board more than 20 years ago. “My husband and I were one of the earliest residents of Chesterbrook, and during the early 1980s, when the shopping center was under construction, the developers offered rent-free space in the center to the township for a library,” said DiFilippo. “The township decided not to accept it and one of my neighbors called me and asked me to join her in going to the supervisors’ meeting to protest that decision. Our efforts failed, but I began attending supervisors’ meetings on a regular basis to learn more about my local government. The more I learned, the more I believed that I could be a supervisor and be a positive influence on the board.” By the end of that decade, DiFilippo was elected and became the first resident of Chesterbrook to serve on a township board. Twenty years later, DiFilippo explains her time spent on the board as a “wonderful experience.”

“I have met so many interesting and special people over the years,” said DiFilippo. “While from time to time some of us might not agree with one another on a particular matter, we were able to make decisions and move on to the next issue before us.”

And since her election in November 1989, the issues, changes and advancements that DiFilippo and fellow board members have seen and dealt with have been both good and bad. On the list of her highlights are the making of the “Tredyffrin – The First 300 Years” documentary and co-chairing the overall tricentennial celebration as well as her 15 years as a member of the Paoli Transit Center Task Force.

“The tricentennial brought the community together to celebrate our community’s very unique history and I am proud to have been part of the team that worked together to make that happen,” said DiFilippo. “And I was pleased to be in attendance to hear the announcement that Amtrak had signed an agreement with a developer to begin the process for constructing a new train station in Paoli.”

Not all of her experiences while on the board, however, were happy.“I delivered eulogies for two fellow board members; I was honored to speak on behalf of the community to acknowledge their efforts,” said DiFilippo. “The most disappointing memory revolves around the admission of wrongdoing by the township’s former finance director. When people let you down, when they take advantage of your trust, it is a black mark on the whole organization which takes time to overcome.”

Throughout the good and bad, DiFilippo has proven why she is a member of the Board of Supervisors who will not soon be forgotten, one who has left her mark on the board, the township and its residents. And of her experience, DiFilippo maintains that it has been an honor serving the community she loves.

“I am proud of how the township has grown and developed during the last two decades,” said DiFilippo. “We have preserved open space; we obtained an Aaa Bond Rating; our community is willing to support cultural assets with private dollars as seen in the expansion of our public library and the use of private funding for our concert series at Wilson Farm Park. We have a quality of life that is attractive to residents and corporate citizens alike. It is certainly an honor to have played a role in all of that.”

As a life-long community servant, the list of groups, organizations and events that DiFilippo has organized, chaired and volunteered for is far too long to list. And through it all, according to DiFilippo, her husband, Luigi, and her family have been nothing but supportive. While her time spent on the Board of Supervisors may have come to an end, DiFilippo is far from done serving her community.