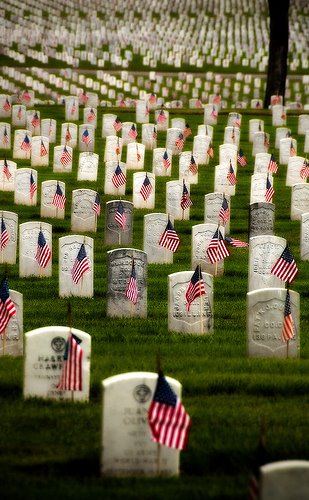 Memorial Day . . .a day of remembrance. Words, symbols, heated rhetoric and clever argument all pale when measured against the brilliance of the white of marble and the emerald carpet of living grass. Dignity, honor, respect and a day of remembrance is all that they ask now of us. Especially, remembrance. From their dark and silent graves, these men and women give honor to our Nation. With fields and fields of flags upon their graves, we bear quiet witness to the precious, eternal value of the sacrifice of these Americans. Whether in combat, or fifty years later surrounded by only the memories of comrades long since passed, the men and women resting forever under those flags once marched proudly under that banner. They have earned nothing less than the unqualified respect of a grateful Nation, and her grateful people.

“…that from these honored dead we take increased devotion to that cause for which they gave the last full measure of devotion, that we here highly resolve that these dead shall not have died in vain, that this nation under God, …and that government of the people by the people and for the people shall not perish from the earth.”
– Abraham Lincoln

Memorial Day… a day of remembrance. Honor the Day. Honor Them!