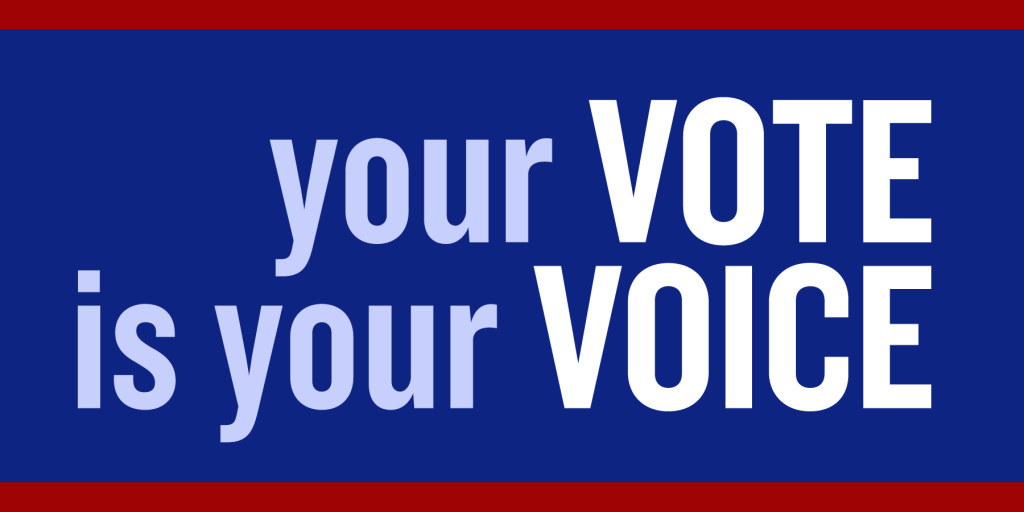 Candidates for the TE School Board and the Tredyffrin Township Board of Supervisors participated in a ‘Meet the Candidate’ forum sponsored by Chester County League of Women Voters on Saturday. As an audience member, it was clear that as voters we are lucky as most of the candidates had done their homework. The candidates were prepared, understood the important issues and were able to present their views effectively. The township and the school district are fortunate to have qualified community members willing to take on the challenges of elected office.

If you were unable to attend the candidate forum, you can find a rebroadcast on the township website as follows.

Election Day is a week from tomorrow, Tuesday, November 3. Before casting your vote, know the candidates!

On Thursday, October 29 at the Tredyffrin Township building, the Chesterbrook Civic Association is sponsoring a ‘Meet the Candidates’ event. Open to the public, this will be a good opportunity to ask specific questions of the supervisor and school board candidates. Please plan to attend.

Come and ask the tough questions about tax increases, development, student safety, fencing at VFMS, and funding for the fire and ambulance company. Be an informed voter: this election matters.

Sponsored by the Chesterbrook Civic Association

Like many community residents, Chesterbrook resident Doug Anestad has voiced concerns related to the fencing plans at Valley Forge Middle School. Doug sent the following email on October 10 to each TE School Board candidate. He received responses from all school board candidates except for two — Doug did not have a valid email address for Fran Reardon (D) and incumbent Kris Graham (R) elected not to respond.

2) Do you think it is a good use of taxpayer money to spend $15,500 to hire a safety consultant to review the VFMS site?

3) Would you support installing additional fencing at VFMS if the safety consultant recommends it? If you would support additional fencing, how would you reconcile this with the public’s right to use the walkways?

Thank you for your time in addressing these questions.

If you want to know where the school board candidates stand on the fencing issue you can read their full responses to Doug’s questions — click here.

In August, the TE School Board candidates were asked to answer the following question in 500 words or less:

Although there are many important issues facing the TE School District, what one issue will you focus on should you be elected? As a school board director, what in your background, experience or education prepares you to help with this specific issue.

All ten TE School Board candidates replied and their responses appeared on Community Matters in August.

Earlier this month, I sent the following email to the Tredyffrin Township supervisor candidates:

On November 3, voters in Tredyffrin Township will go to the polls to select four supervisors — two At Large, one 1st District (Eastern) and one 3rd District (West) seats are available. To assist voters in the decision-making process, it is important for the public to know ‘you’, the candidate.

People bring varied backgrounds and qualifications to the job of township supervisor; and as voters, we need help in making the right choices on Election Day. As a result, I am asking each of you to respond to the following statement:

Please identify a specific character trait that makes you an effective leader. Give an example(s) of how you have utilized that personal characteristic in previous leadership position and, if elected, how residents will benefit from that particular trait. Be specific.

Your response should not be a political campaign plug or a laundry list of your accomplishments. Your response needs to (1) focus on a specific personal character trait and (2) an explanation of how that trait will benefit the residents.

All Tredyffrin Township supervisor candidates are invited to send a response. Your statement (word doc format) should NOT exceed 500 words and is due no later than October 15, 2015. Your responses will not be edited and will be provided to the public via Community Matters. Your participation is completely voluntary and all candidate responses will appear on Community Matters during the week of October 19.

I heard back from all eight supervisor candidates and their responses will appear on Community Matters in alphabetical order (by last name) on the following schedule:

This exercise should be viewed as another tool in the supervisor candidate selection process by us, the voters. In the next few days, please review the candidate responses and you decide if they understood the question and answered appropriately. Who will you support on Election Day? 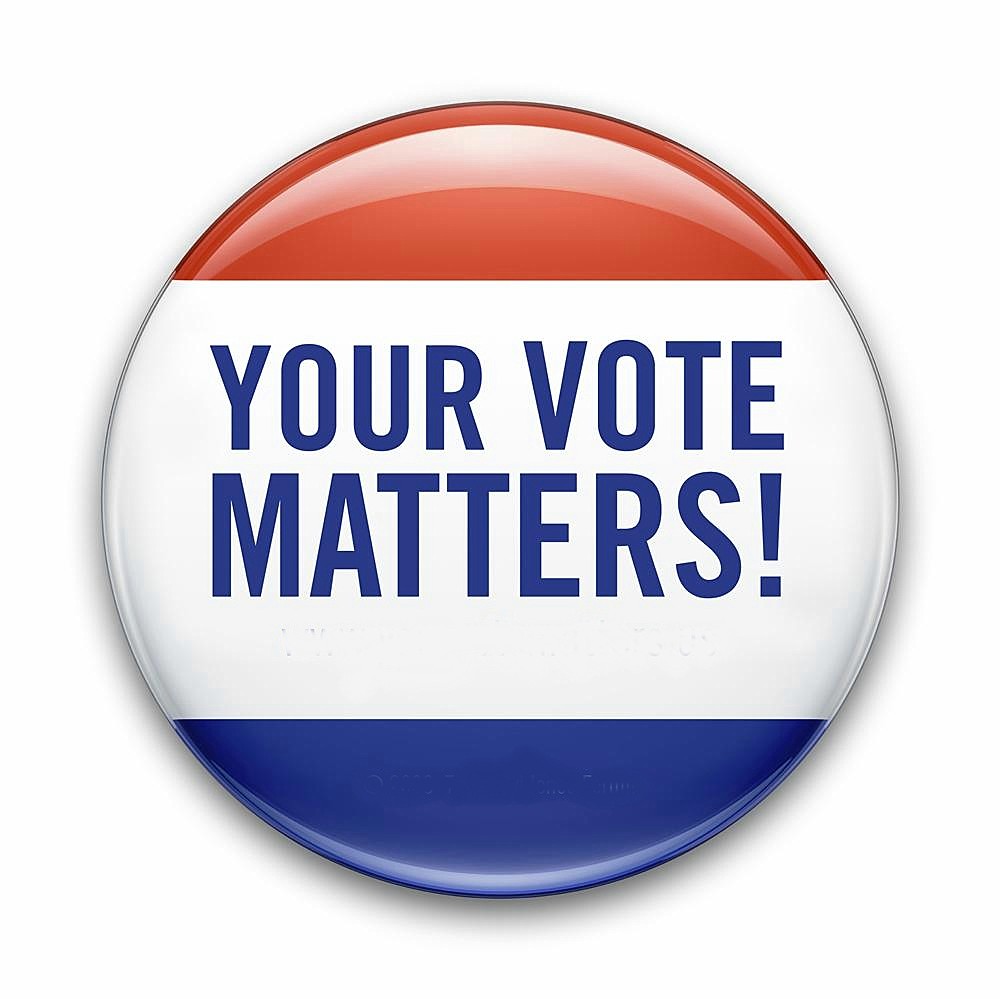 I received some early inaccurate results however the following information is verified from the County website. In reviewing the cumulative results, the total vote count for the Board of Supervisor races are as follows:

Two at-large seats are available on the Board of Supervisors and no incumbents are in the race. Republicans Mike Heaberg and Kristen Mayock are current at-large supervisors and are not seeking re-election. Both having previously run unsuccessfully for the Board of Supervisors, Moir and Lukens received the highest number of votes in yesterday’s Primary Election. Political newcomers, Democrats Bankins and Horvath followed closely behind Moir and Lukens in total votes.

The District 1 supervisor race has a re-match between Tredyffrin Township Planning Commissioner chair Tory Snyder(D) and Paul Olson(R), the longest-serving supervisor in the history of the township. If you recall, in 2011, this particular supervisor race was extremely close with only 13 votes separating them in the General Election. For Primary Election 2015, Olson received only two more votes than Snyder. It doesn’t get much closer, it’s going to be interesting to see what happens over the next 6 months.

For many people, the Board of Supervisor races have taken a backseat to the TE School Board races.

The unresolved school fencing issues, the very expensive $4 million + maintenance building and the outsourcing of the aides and paraeducators are just three school district issues that recently have had some of us questioning the decisions of the current school board. The Primary Election results indicate an interest from the community in ‘change’, particularly the numbers in Tredyffrin, Region 2.

In the only school board race with an incumbent, Democrat Michele Burger has a commanding lead, with more than 200 votes separating her and Republican Ed Sweeney, with incumbent Kris Graham(R) in third place. With only two seats available in Region 2, if the General Election were held today it would mean that incumbent Kris Graham would no longer be sitting on the school board.

Two positions on the school board are available in Region 1. All political newcomers, the Democratic candidates Roberta Hotinski and Todd Kantorczyk received the two highest vote totals in the Primary Election.

In addition to the Region 1 and Region 2 seats in Tredyffrin Township, Region 3 in Easttown Township has one seat available. Currently serving school board director Dr. Pete Motel(R) is not seeking reelection.

The Primary Election results for Easttown, Region 3 have Republican Kate Murphy receiving 610 votes and Democratic Fran Reardon receiving 268 votes. Reardon did not cross-file. Although both Murphy and Reardon themselves are newcomers to the school board races, Murphy is the daughter of a well-known local political family, Steve and Carol Aichele. Steve Aichele served as the Chief of Staff for former PA Governor Tom Corbett. Carol Aichele served as Secretary of the Commonwealth under Corbett and previously served as a Chester County Commissioner and TE School Board member.

The results of the Region 2 School Board race should be a message not just to incumbent Kris Graham but to the entire school board. More and more people are ‘tuning in’ as to what is going on and do not necessarily support some of this Board’s decisions. Whether it is the increasing taxes, school fencing, outsourcing of District employees, an over-priced maintenance building, lack of transparency, etc. – these votes reflect a desire for change. The Board needs to accept that this is no longer a ‘few discontents’ but that more and more residents are paying attention and are troubled by some of their decisions.

In closing, I have to include this photo from Primary Day. I ran into the Democrat and Republican chairs (Kathleen Keohane and Neill Kling) at Our Lady of the Assumption, one of the voting locations yesterday and they generously posed for this photo. Although I’m delighted to include it here on Community Matters, I challenged each of them to include it on the respective websites! 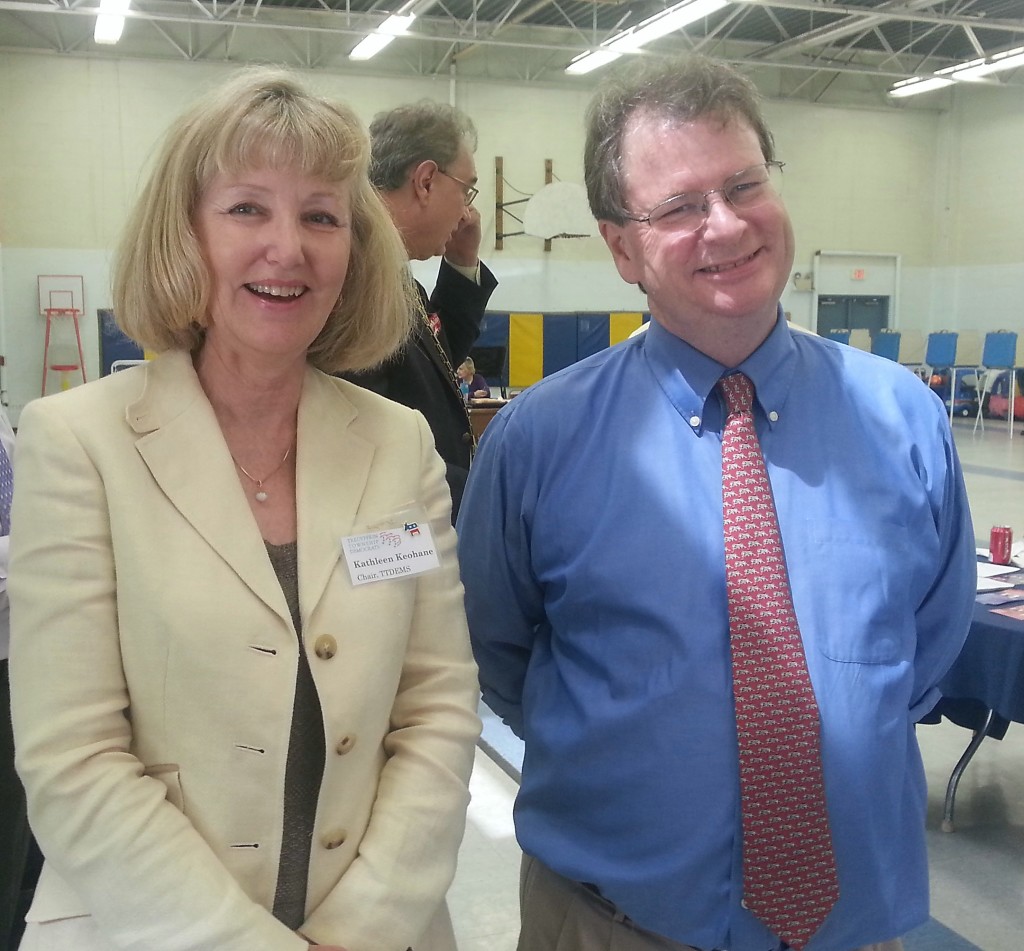