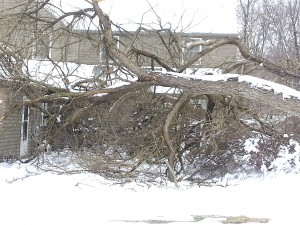 As the weekend ends, there’s a snow/ice mixture falling outside, with a National Weather Service prediction of an additional 1-3 inches. After the last week this community has endured, no one is smiling about tonight’s snow or more in the forecast for later in the week.

It’s been five days since the historic Winter Storm Nika plummeted the Philadelphia region into darkness. At its peak, there were 850,000 utility customers without power; restoration of power has now brought the number down to about 38,000 remaining households. A review of the PECO website shows the majority without power in the region are customers in Chester County – 13,000 remain without power tonight. Tredyffrin Township remains the focal point of power outages in Chester County. Although there is improvement in restoration, there are still 1,100 households without power on this cold, snowy Sunday night.

Today I ventured out around the township and the vastness of the winter storm damage is remarkable. Although the tree damage is township wide, in my opinion, the highest concentration of damage is on Valley Forge Mountain. Both Tredyffrin and Schuylkill residents on VF Mountain have sustained major property damage – actually, I don’t think there are many houses that escaped the destruction. After driving in that area, it’s now understandable why I’ve heard it described as a ‘war zone’.

Other areas that continue to be plagued with power outages and/or property damage is the Great Valley, especially along Yellow Springs Road, Croton Road between Upper Gulph and Warner Roads, Strafford train station area including Crestline, W. Valley and Homestead Roads, Chesterbrook Boulevard, N. Valley between Swedesford and Lancaster Ave.

Although we all understand that this winter storm was monumental in many ways, once the region has its power fully restored, there needs to be a thorough review – what worked and what didn’t work. In my opinion, PECO came up short on a number of levels. First off, although the major power outage occurred on early Wednesday morning, it was Friday before PECO appeared to get itself fully mobilized, 48 hours after many residents had lost power. By Friday, it finally became obvious to PECO officials, that they needed to call in reinforcements – and help did come, from Arkansas to Canada. I saw one impressive line of 20+ Pike Utility trucks from North Carolina leaving PECO’s Berwyn location this afternoon. It was reported that over 5,000 utility workers arrived to help restore power to the region.

Arguably, the most annoying thing that PECO did was to provide misinformation to its customers – I have yet to find anyone who received an accurate estimated time of restoration from PECO. Rather than constantly changing individuals’ restoration time (making it impossible for people to plan) PECO should have just said that they didn’t know when service would be restored. That approach would have been preferable to giving people false hope with their ‘by 11 PM’ daily speech! We had a displaced family from Croton Road staying with us during the power outage and PECO changed their estimate time of restoration multiple times during any given day, adding immeasurable stress to an already stressful situation. And this went on for 5 days until late this afternoon when service was restored and they returned home to 30-something degree temperatures (inside the house!) and major tree damage outside.

My criticism of PECO is not directed at those men and women serving on the front lines during this winter storm. No, those workers in the field actually ‘doing the work’ are greatly appreciated and thanked for their efforts. It was wonderful how excited people became when they saw utility trucks rolling into their neighborhood! The criticism for misinformation, lack of communication and slowness to respond rests squarely with those at the top of the PECO pyramid.

What’s the saying, “Rome wasn’t built in a day” – the same could be say about restoring power to Tredyffrin Township and its surrounding areas. Downed power lines and toppled trees left many roads impassable and neighborhoods with dangerous conditions. Winter Storm Nika is PECO’s second worst in their history in terms of power loss, exceeded only by Hurricane Sandy in 2012. However, as the third day without power ends for many residents, there are improving conditions to report.

Supt. Giaimo assured me that many in the Police Department “have been working around the clock to keep people as safe as possible”.

I have been in contact with Township Manager Bill Martin. Just as the police chief, the township manager is also working very long hours but wanted me to know that “the hard work is done by all the staff – public works, police and support staff. They work above and beyond anything I have seen in all my years of public service, they care so much about what they do and the residents.”

The hope is that most of Tredyffrin Township should have their power restored by Saturday night – although it may be Sunday for some of the outlining areas.

People are reporting repair crews have arrived from all over the US –Ohio, Illinois, Alabama, Florida, North and South Carolina, Connecticut, Massachusetts and even crews from Canada! It was interesting to hear a PECO representative say that they usually don’t receive a high volume complaints in a power outage until about the 72 hour mark but that this time the complaints started at less than 24 hours into the outage. However, unlike the August storm of Hurricane Sandy, residents are dealing with below-zero temperatures during Winter Storm Nika.

Although I think that PECO could have moved quicker to organize following the power outage and PennDOT did not do its best at handling snow and ice covered roads, I have the highest praise for our home team in Tredyffrin – Supt. Giaimo and the Police Department and Township Manager Bill Martin and his support staff, public works and engineering staff. In addition, we thank the Berwyn Fire Company Chief Eamon Brazunas and his staff of volunteer fire fighters and Chief Ira Dutter and the volunteers of Paoli Fire Company. Many of these folks are exhausted having worked long hours, and in many cases leaving their own families and houses with similar power outages to help us – the residents of Tredyffrin – and deserve our appreciation and gratitude!