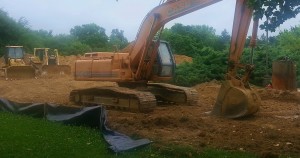 I was surprised how many heavy equipment vehicles are required to add a few parking spaces at Valley Forge Elementary School. Passing by the school on Walker Road, you couldn’t miss the mountain of dirt, storm water drainage system and assortment of backhoes and bulldozers. Increasing the size of the VFES parking lot is one of the school district’s summer facilities projects.

While I stopped to take a photo of the parking lot construction, I walked over to the infamous tennis courts. It was nice to see the tennis court door unlocked and available to use. It’s been years since I played tennis, but I couldn’t help but notice how pristine the courts looked – the playing surface well maintained, the lines recently painted and the net in great shape. VFES neighbor Don Detwiler has maintained the tennis courts for years – free of charge. 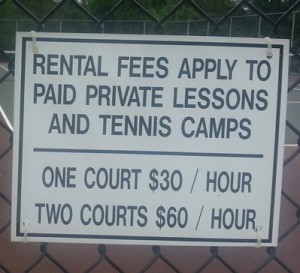 The VFES tennis courts are available through the summer for residents to use free of charge but the start of school in six weeks will also mark the start of user fees for local tennis players. At the District’s June 14 facilities meeting, discussion of usage fees ranged from a suggested $28K annual association charge to hourly fees of $15/hr. weekdays to $25/hr. weekends.

The rental of the courts for private lessons and tennis camps was established at the June facilities meeting at rate of $30/hr. for one court and $60/hr. for two courts with fees to start immediately. Signage is now on the tennis court fences reflecting those fees. To schedule the use of the courts for lesson or camp, there is a notice to call the District’s business office 8 AM – 4 PM, Monday – Friday. It is completely unclear to me how the District ‘polices’ the use of the courts by instructors — there’s no lock box and the door was ajar. Shouldn’t the details of how the process works be known to the public?

The usage fee for individuals to use the tennis courts will be determined at the August facilities comittee meeting and those fees will presumably begin with the start of school year in September. If the fee schedule for the use of the tennis courts for instruction is determined in the facilities committee meeting, I guess the facilities committee will also determine the usage fee for residents. It’s impossible for many people to go to the monthly facilities meetings as they are held on Friday at 2 PM. I would have expected the usage fees to be discussed at a regular school board meeting. In fact, because the usage fee was not previously discussed at the monthly school board meeting, I thought there was still an option not to charge residents a fee. But based on the signage on the fence, there’s no question that there will be a fee — only question remains as to how much it will cost the residents. Doesn’t it seem odd to anyone else that policy is determined in a committee meeting and then is sanctioned though the use of signage. Shouldn’t the tennis court usage and the fee schedule be available for public disucussion at a regular school board meeting?

It is likely that many in our community were not aware of last week’s drama over the planned demolition of the two tennis courts at Valley Forge Elementary School this past Saturday. Through the efforts of many neighborhood members, the courts received a temporary “stay of execution” to allow for further discussion. However, getting the School Board Directors to call off the bulldozers at the ninth hour did not come easily or without a political tug-of-war between the School District and Tredyffrin Township. In the end, the issue wasn’t about a few neighbors crying foul over the proposed demise of their local tennis courts. From my vantage point, this problem has more to do when elected officials and administrators choose to ignore the voices of the community until the situation borders on explosive.

For those that are unaware of what I’m talking about, here’s the brief overview. Tredyffrin Township, on Tredyffrin Easttown School District property, constructed the tennis courts at Valley Forge Elementary School and until 2009, maintained the two courts. In 2009, the Township decided they no longer wanted to maintain the courts and requested that the School District take over maintenance. However, according to TESD business manager, Art McDonnell, the District has never maintained the tennis courts.

The District’s 2008 parking study concluded the need for additional parking spaces at Valley Forge Elementary School — requiring the expansion of the existing lot. I need to point out that the parking lot and its planned expansion is located in the front of the elementary school whereas the tennis courts are in the back of the property. The expansion of the VFES parking would not include the property where the tennis courts are located.

The obvious question to ask … why demolish the tennis courts if the parking lot expansion is not close to the courts. It was the view of the School Board that they could trade the increased impervious coverage and storm water requirements of the new parking area with the removal of the tennis courts. The Board believed that this approach would reduce the parking lot project costs and save taxpayer money. McDonnell claimed that there was an agreement between the District and the Township in this regard.

Shortly before last week’s School Board meeting, Glenhardie neighbors to Valley Forge Elementary School were notified of Saturday’s planned demolition of the tennis courts. Representing her neighbors, township resident Rosemary Kait appealed to the School Board Directors to delay the demolition pending further discussion. Based on the discussion, it appeared that the demolition was required by the township to meet storm water requirement for the parking lot expansion project. Kait left the School Board meeting and went to the Board of Supervisors meeting, seeking resolution.

As the clock ticked down to Saturday’s ‘Demolition Day’, there was a flurry of activity with phone calls and emails from the residents to the School Board and administration as well as the township manager and Board of Supervisors. What quickly developed was a ‘Tale of Two Cities’ – with Art McDonnell claiming that the Township required the demolition of the tennis courts to meet storm water requirements for the expanded parking lot. Township Manager Bill Martin and Township Engineer Steve Burgo countered McDonnell’s claims, stating that the removal of the tennis courts would not reduce the storm water requirements of the additional parking spaces.

In a press release from the Township, Martin takes issue with the way the District is presenting the situation to the public, and states that the District’s “… statement implies the Township requirements ‘force’ you to remove the courts”. Martin suggests, “The District could have easily gone to the ZHB (Zoning Hearing Board) for zoning relief to impervious coverage limit.”

As McDonnell and Martin issued their statements on behalf of the District and Township respectfully, the residents worked behind the scenes – appealing directly to members of the School Board and the Board of Supervisors. Copied on many of the email exchanges, I learned that these tennis courts are regularly used, not just by neighbors but by children in PTO sponsored after-school tennis programs. I also learned that the tennis courts are currently in very good condition; but not because the courts are maintained by either the District or the Township. For several years, at no cost to the Township or District the neighbors have actually maintained the tennis courts.

Believing that there had to be a better solution than demolition, (like a ZHB variance), all the residents were simply asking for delay for further discussion. Although some have suggested that the proposed demolition of the tennis courts is not political, you cannot escape the fact that the president of the School Board Kevin Buraks (D) and chair of the Board of Supervisors Michelle Kichline (R) are completing their first terms and now seek re-election to the School Board and BOS, respectfully. Clearly caught in the midst of this tug-of-war and finger-pointing, the residents planned a 7 AM ‘Save our Tennis Courts” rally.

Supportive of the residents, I planned to attend their early morning rally. Acutely aware that the School District owns the property and therefore has the right to demolish the tennis courts, I believed that further discussion could produce an acceptable alternative to bulldozing. Very late on Friday night, School Board president Kevin Buraks notified the neighbors of the Board’s decision to delay the demolition, pending further discussion. The next monthly TESD meeting is Monday, April 22.

Bottom line … in my opinion, much of the drama over the demolition of the tennis courts and the ninth hour decision to delay could have been avoided. How? Residents deserve better communication and accountability from elected officials. I am troubled by (1) the lack of adequate notification of the District to VFES neighbors of the demolition; (2) misrepresentation or confusion of the related facts (I suggest that you read the conflicting Township press release and the School District’s response) and (3) the overall feeling from residents of unresponsiveness from the School Board and administration.

Normally, I do not comment on Ray Hoffman’s column in Main Line Media News, but I take issue with his characterization of the threatened tennis court demolition. In this week’s column, Hoffman says, “… the recent flak from neighbors over the scheduled demolition of the two tennis courts at Valley Forge Elementary School is Shakespearean at its best, “much ado about nothing,” or an inventive modification of the NIMBY “law” at its worst.”

Mr. Hoffman, I could not disagree more … the proposed tennis court demolition is about much more than about ‘nothing’. It is about accountability and transparency from our elected officials. It is about the public’s trust for fairness from our government. It is about those elected to serve listening to our concerns and working with us for acceptable solutions. Poor accountability erodes our trust.