Congratulations TE School District! ‘Niche’ which measures neighborhoods and cities for livability, compares k-12 schools and reviews over 8,000 colleges and universities has released their 2015 national school district rankings.. The Niche K-12″ report, which compares 120,000 k-12 schools has been released. For those interested in rankings, Tredyffrin-Easttown School District was listed as third in the country and first in the state.

Here’s Niche’s ranking of the ‘Top 10’ school districts in the country:

Further information about Niche and their rankings, can be found on their website, www.niche.com 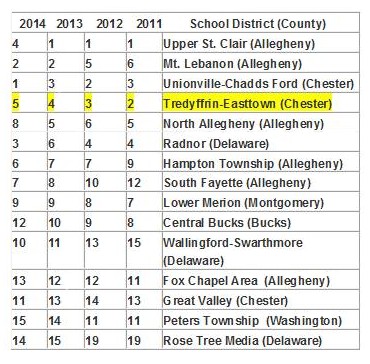 Periodically I have posted about the Unionville Chaddsford School District (UCFSD) and their ongoing teacher contract negotiation struggles of last year. Deadlocked contract discussions required the PA Labor Relations Board to intervene and assist with the bargaining impasse. However, even after the release of the fact-finding report, it took months for resolution and the signing of a new contract.

After working without a teacher’s contract for over a year and weathering the contract negotiation process, a new contract between the UCFSD and the teachers was signed in September 2011.

Academically, there is a similarity between the UCFSD and T/E school districts – both districts are top performing school districts in the state. On the SAT and PSSA performance, both school districts score in the top 1%. In my post of September 21, 2010, I wrote that “T/E School District ranks #2 for SAT scores and UCFSD is ranked at #5.” Using the high PSSA and SAT scores as a negotiating tool by the teachers union, I wondered if this was a tactic that would similarly be used in T/E and wondered if our school district could learn from the lessons in UCFSD.

All around we are seeing school districts struggling. We are watching Delaware County’s Chester-UplandSchool District as they try to figure out if they can make their payroll next week. Over in Bucks County’s Neshaminy School District, classes for 9,000 students are cancelled for the third day as their teachers strike. Having worked without a contract for four years, the teachers and the school board are battling over the contract and healthcare appears to be a major stumbling block on both sides.

If you follow Community Matters, you may recognize Keith Knauss as one of those that regularly comments on school district issues. Knauss currently serves on the Unionville Chaddsford School Board and brings first-hand experience, especially when dealing with teacher negotiations.

Knauss prepared a report for his own school district, which he has graciously offered for Community Matters readers. He looked at the 61 Philadelphia area school districts for factors that might explain the wide variation in academic achievement on PSSA and SAT tests.

In his analysis of the data, Knauss uncovered some interesting results. He discovered that “only two factors are significant – Parental Education and Poverty and those two factors alone can explain the bulk of the differences in academic achievement.” Recognizing that “those two factors are beyond the control of the District”, Knauss notes that the “all other factors, where the District does have control over are not significant, including per student spending, class size, teacher salary, teacher experience, teacher education.”

While most of us might assume that the more experienced teachers, or those with the most education and the highest salaries would be factors associated with higher test results, Knauss research data does not support that theory, at least not in the 61 school districts in the Philadelphia area that he researched. Knauss concludes, “contrary to popular belief, there is no evidence from the 61 districts that spending or the number of teachers has a measurable effect on academic achievement.”

Click here to read Keith’s Spending Trends Presentation TE research study. I would encourage everyone to look at it – see which factors influence test scores in T/E. A fascinating study providing an interesting way to look at what may (or may not) contribute to PSSA and SAT test scores.

Going back to the Neshaminy School District, according to a November 28 PhillyBurbs.com article, the teachers in this district are the highest paid in the state. However, when you review the PSSA results, Neshaminy School District doesn’t even make the top 50 — but is number 245 among Pennsylvania’s 500 districts. Over half of the Commonwealth’s school districts have outperformed Neshaminy on PSSA tests for the last 10 years.

The SAT results in Neshaminy have the school district ranking number 156. And according to the article, over half of the teachers (337) make over $90K plus 64 teachers make over $100K. The average teacher’s salary in Neshaminy School District is $80-85K.

Neshaminy parents who are opposing the demands of the teachers, claiming that they are not getting ‘what they are paying for’ — believing that because the teachers are the highest paid in the state, it should equate to higher test scores. But as evidenced by Keith Knauss research data, their assumption would be incorrect. According to the research, higher salaries do not necessarily mean higher PSSA and SAT scores.