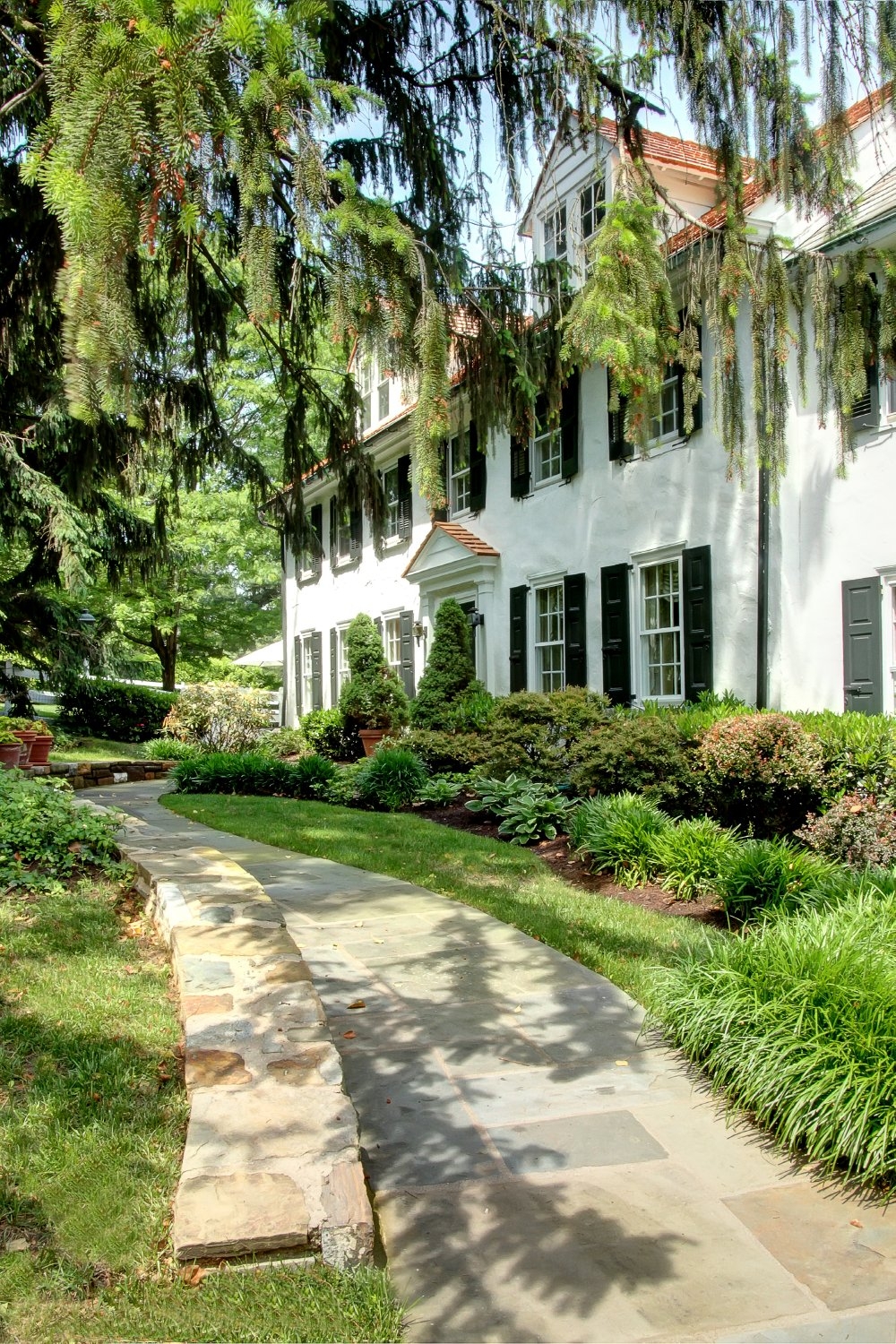 When I was looking for houses for the 9th Annual Historic House Tour last year, there wa

s a beautiful 18th century home at 523 Pugh Road in Wayne that was for sale. The stately home, known as the Ann Pugh Farm, has its early roots in the 1700’s. The stone farm house, garage, barn and springhouse were all wonderfully restored and and 2.2 acres of beautifully landscaped lawn.

Described in the real estate brochure as a a “historic estate property with stately farmhouse”, the stone house was fully restored with five fireplaces, a ‘guest’ barn, swimming pool with spa, 5 bedrooms, 4 1/2 baths, library, 4500 square feet and all the modern amenities for the 21st century family.

The property was absolutely stunning and a perfect house for the annual historic house tour! I contacted the real estate agent in June to see if the owners would consider having the house on the tour in September. Occasionally there are houses for sale on the house tour and sometimes the ‘perfect buyer’ for the old house is on the tour. And with a location next to the elementary school, this home would be a real attraction as a family home and the house tour a perfect opportunity for more potential buyers to see it.

Although flattered to be asked, I was told by the real estate agent that the older couple who owned house declined the house tour offer, stating that they were very private people and were not interested. I was disappointed — neighboring Avonwood Farm (c.1750) also on Pugh Road was already scheduled to be on the 2013 house tour and the addition of the Ann Pugh Farm would have connected the histories of those two early farms.

The 9th Annual Historic House Tour occurred in September — with Avonwood Farm and without the Ann Pugh Farm, which was still for sale at that point. It sometimes can take longer for historic homes to sell so I assumed that the house was still on the market — that was until I learned otherwise yesterday! I was shocked when Tredyffrin Township resident Christine Johnson posted a demolition photo of this beautiful historic home on her Facebook page yesterday. It seems impossible to believe that this could happen here in Tredyffrin Township and no one cared enough to try and save it a piece of our local history!

According to Zillow, the Ann Pugh Farm was sold for $1.4 million on December 12th. Although less than the original asking price of $1.7 million

It would be one thing if this 18th century house had been neglected and in disrepair but that was not the case. The former owners purchased the house in 1982 for $230K. They lived in the house for thirty years, raised their family and lovingly restoring their historic treasure, down to every detail! With their children grown and out of the house, they decided to downsize and sell the family home.

I cannot imagine how the former owners must now feel knowing their beautiful historic home has been demolished. I wonder if they had any idea what the ‘new’ owners intended to do when they signed that sales agreement in December? Beyond the purchase price, the ‘new’ owners have the demolition and rebuilding costs of their new McMansion. It’s hard for me to understand why anyone would spend $1.4 million on a completely restored historic home, only to turn around and knock it down.

As president of Tredyffrin Historic Preservation Trust and chair of the annual historic house tour, the destruction of the Ann Pugh Road Farm is more than just a sad day for me; it’s a loss to the community. Historic buildings serve as reminders of the past. This is one of the reasons preserving historical buildings is important. Understanding the past and having reminders of the past allows people to understand there they are and where they are headed. When people understand what the community has gone through and have visual reminders of their past then they can feel more connected to the place. Preserving our past gives us more understanding and hope for the future.

The loss of the Pugh Road farmhouse is a loss of our local history … and represents a very sad commentary on the value of historic preservation in Tredyffrin Township.