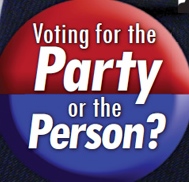 The local 2017 campaign season has taken a toll. It has been difficult (and disheartening) to watch as friends and neighbors turned on each other; sometimes over important campaign issues and other times with unfounded personal attacks. (From my vantage point, both sides are equally at fault.) Sadly, the political unrest we see at the national level has played out in our own backyard. Regardless of who wins our local supervisor and school board races tomorrow, the difficult task to come together and move forward will remain.

Local elections do matter. Take schools: Neither the president nor Congress can have as much effect on local schools as the school board. In addition to overseeing a $140 million budget, the T/E School Board is tasked with balancing their responsibility to provide quality educational programs with the need to be effective stewards of public resources. The job requires dedication, experience and commitment to the students, parents and residents. (Click here for The Spoke interview podcast of the seven T/E School Board candidates. Thank you to Multimedia Editor Neil Goldenthal for providing the link).

Our local government has much to consider: the adequate funding of fire and safety, our library services, real estate development and redevelopment, preservation of open space and our historic structures, infrastructure improvement needs, etc. With three of the seven Tredyffrin Township Board of Supervisor seats on tomorrow’s ballot, this is an important election. Which candidate’s views best aligns themselves with you? If you are undecided, a quick Google search of the supervisor candidates may provide helpful information.

In addition to the sea of individual candidate signs, the political parties have placed signs suggesting voters “Stop the Madness, Vote Democratic” and “If You Love Chester County, Vote Republican”. As a registered Independent, I never believed that it was the letter of the alphabet next to your name that would determine your success as an elected official. Whom you support on election day is a personal choice but please consider my appeal to “Vote for the Person, Not the Political Party”, before you pull the straight-party handle tomorrow.

To my fellow disenfranchised Independents who were not allowed to vote in the May primary election, our day to be heard has come. The number of registered Republicans and Democrats are about even in Tredyffrin Township, which makes the Independent votes all the more important. Please join me — our votes do matter and can make a difference in the outcome!

Supervisors, school board, County offices and judges are all on the Election Day 2017 ballot. The message is to get out and vote tomorrow! In the words of Napoléon Bonaparte, “Ten people who speak make more noise than ten thousand who are silent.”

If you are a registered voter and don’t know your polling precinct number, use the PA Polling Place Search here.

Tredyffrin Township Board of Supervisors Candidates

Township Supervisor at Large – Vote for 2

Tuesday, May 16 is Primary Election Day in Pennsylvania. In the words of Napoléon Bonaparte, “Ten people who speak make more noise than ten thousand who are silent.”

You have to be a registered Democrat or a registered Republican to vote in the Primary Election tomorrow, May 16. Sadly, Pennsylvania is one of a handful of states that does not permit Independent candidates, like myself, to participate in the Primary Election. Independent voter registrations continue to rise and it is quite possible that these voters may be the deciding factor for local elections in November.

For the D’s and R’s — the message is to get out and vote tomorrow! In the words of Napoléon Bonaparte, “Ten people who speak make more noise than ten thousand who are silent.”

Below is a list of supervisor, school board and magisterial judge candidates. Some of the candidates have personal campaign website and Facebook pages. Take the time to know your candidates before you vote!
——————————————————————-
Tredyffrin Township Board of Supervisors

Voting Precincts Beginning with the 2017 Election:

The Tredyffrin Township Republican Committee has endorsed the following candidate for the office of Tredyffrin-Easttown School Director:

The Tredyffrin Township Democratic Committee has edorsed the following candidates for the office of Tredyffrin-Easttown School Director:

All candidates who wished to appear on the Democratic or Republican ballot in the Primary Election needed to have filed their “nomination petitions” along with a “statement of financial interests” with Chester County Voter Services. The nomination petition documents required the signature of registered voters, who are enrolled in the party of which the candidate sought nomination and reside in the electoral district of the office sought. The statement of financial interests requires the candidate to provide information regarding the filer’s source of income.

Below is the list of our local candidates for supervisor, school board and magisterial district judge – best of luck to all those taking the journey! Regardless of party affiliation and stance on specific issues, we thank you for your time, effort and willingness to serve!

The last day for withdrawal by candidates who filed nomination petitions is March 22. The Primary Election date is May 16.

Tredyffrin Township Board of Supervisors

Voting Precincts Beginning with the 2017 Election:

The Tredyffrin Township Republican Committee has endorsed the following candidate for the office of Tredyffrin-Easttown School Director:

The Tredyffrin Township Democratic Committee has announced the following candidates for the office of Tredyffrin-Easttown School Director: (official endorsement meeting not yet held)

Incumbent school board director Scott Dorsey (D) is seeking a second term on the TE School Board. The Tredyffrin Township Republican Committee has chosen not to oppose Rev. Dorsey in the Region 1 school board race.

Incumbent school board directors Doug Carlson (R) and Virginia Lastner (R) are seeking reelection for a second term in Region 3. Carlson currently serves as the President of the TE School Board.

UPDATE: Candidates Tina Whitlow (D) and Heather Ward (D) have filed to run for TE School Board for Region 3.

The Region 2 school board race will be interesting. Republican Doug Anestad, a computer consultant, attends many of the school district meetings and is an active resident participant – most notably outspoken in his opposition of the VF Middle School fencing project (which the current school board elected to install). Anestad’s opponent in the school board race is candidate Kyle Boyer (D) who is a currently a TESD social studies teacher at VF Middle School. I do not recall when we have had a candidate for the TE School Board, who was a current TE School District teacher. This could prove to be a delicate balance for candidate Boyer – employed as a teacher in the school district where he seeks to serve on its school board.