I received an email from a Berwyn resident asking that I add a warning to drivers on Old Lancaster Road in regards to recently installed raised crosswalks. She indicated that there were 2 crosswalks; one in front of the Timothy School and the other much more elevated crosswalk was installed down by TE Middle School. She described a car losing its oil pan when the driver went over the elevated crosswalk — car had to be towed as a result!

Wondering why a crosswalk would be raised to the level that was causing car damage, I drove to Old Lancaster yesterday to see for myself. First I came to the Timothy School crosswalk and although there was no warning signs to indicate the elevated crosswalk, it didn’t seem to be out of line in scope of construction.

But then I drove down to the other crosswalk down by the middle school. All I can say is WOW . . . never saw this kind of walkway (nor apparently have the residents or the car drivers I spoke with on Old Lancaster). Not only is this crosswalk elevated at a higher level than usual, the angle of the elevation is a very steep incline for cars. And the width (or length) of the crosswalk seems very long . . . it must be a car and a half long.

There are no blinking signs, no flourescent stripes on the road, no warning whatsoever when you approach this elevated crosswalk. I spoke to one driver who said he had scraped the under part of his car and wanted warnings on the road immediately. One of the residents living next to the elevated crosswalk says that she is awaken at night by cars scraping the crosswalk. I had several people stop by and ask me who was responsible for the crosswalk . . . was it the township public works, PennDot, who? I assume that the crosswalks are part of the sidewalk project but I don’t know who installed the crosswalks. I would think there is a standard for elevated crosswalks, inspection and approval procedures — someone must have OK’d this crosswalk as safe, right?

The photos really do not indicate the significance of the problem. One mother and her son who live nearby tried to stand in such a way on the elevated crosswalk so as to indicate 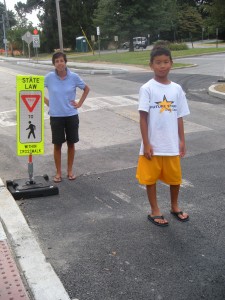 the level of elevation. (photo on the left) Both sides of the road surface of the crosswalk already have deep gouges in the asphalt where the bottom of cars have scraped.

It was fascinating that local residents stopped to talk to me as I was taking my photos. All had much to say; one older couple in the white SUV kept backing up and down on the crosswalk so that I could get the severity of the incline. (But again, I don’t think the photos do the situation justice). Seriously, there needs to be warning lights, signs, some kind of notice for drivers . . . school is going to open soon and this situation is dangerous.

I do have a question — if the raised crosswalk was another form of traffic calming (as some suggest as the reason for the bump-outs) why is the TE Middle School crosswalk significantly more elevated, wider and with a steeper incline than Timothy School crosswalk? They are located minutes apart on the same road . . . very strange.