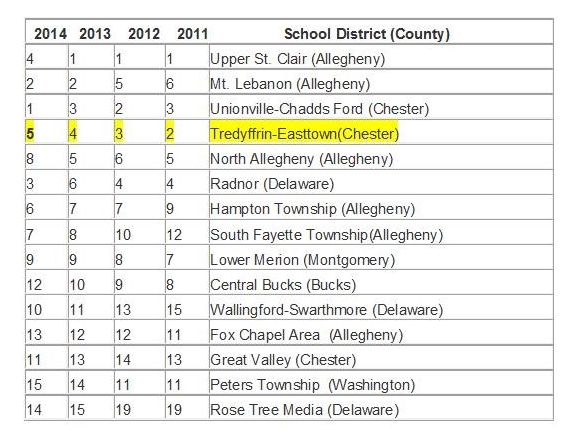 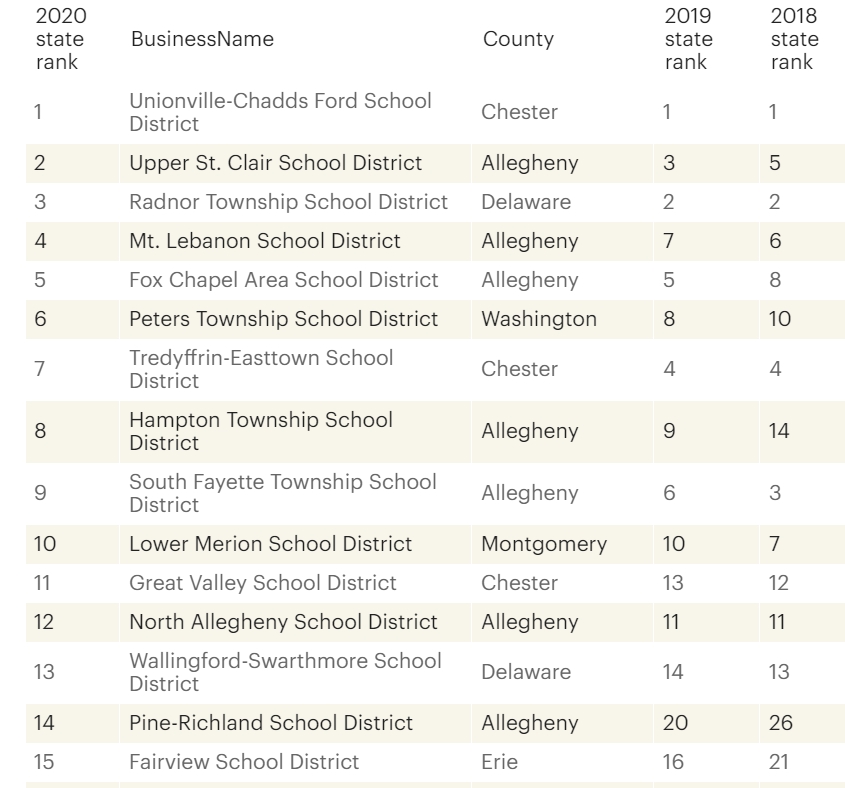 Last week, the Pittsburgh Business Times published their 2012 Guide of Western Pennsylvania Schools, which lists the school district rankings for the Pittsburgh area and the entire state of Pennsylvania. The newspaper analyzed all the school districts’ performance based on the Pennsylvania System of School Assessment (PSSA) Exam results. According to their website, the formula for the ranking takes into account three years of PSSA test scores in math, reading, writing and science. They look at three years of scores, with the current year given the most weight.

To see the ranking for all 500 Pennsylvania school districts, click here.

A Pennsylvania school district that places in the top 15 or 20 out of 500 districts statewide based on the PSSA exams is an achievement for which students, parents, teachers and administrators can all be proud. PSSA scores is viewed by many as a reliable predictor of future success. As a tool for student assessment, the PSSA exam helps measure and provide useful information of what students are learning. The PSSAs measure the performance of the entire class and give us the truest measure of how an overall class is performing.

In the Unionville-Chadds Ford School District, the teachers union used their District’s high PSSA and SAT scores as a contract negotiating tool. I wrote a post on January 11, 2012, ‘Do Higher Teacher Salaries in Philadelphia Area School Districts Equate to Higher PSSA & SAT Scores?’ that included a report by Keith Knauss, a school board member from Unionville Chadds Ford School Board. Knauss looked at 61 Philadelphia area school districts for factors that might explain the wide variation in academic achievement on PSSA and SAT tests.

While most of us might assume that the more experienced teachers, or those with the most education and the highest salaries would be factors associated with higher test results, Knauss research data does not support that theory, at least not in the 61 school districts in the Philadelphia area that he researched. Knauss concludes, “contrary to popular belief, there is no evidence from the 61 districts that spending or the number of teachers has a measurable effect on academic achievement.” Click here to read Keith’s Spending Trends Presentation TE research study.

Bottom line … if we accept that school district rankings, based on PSSA performance, have an importance, do we give credit to the District teachers for the results? If you believe that the teachers play a role in the student’s performance on the PSSA exams, should the results be a factor in the current teacher contract negotiations? Should the TEEA use the PSSA exam results as a tool in their contract negotiations?

TESD is facing tighter budgets and difficult choices are the options that remain for the school board. In all likelihood, the 2012-13 school year will see a $50 fee charged to students to play sports, perform in the marching band and participate in clubs. The District’s Education Committee is exploring many ways to reduce costs to help the budget. Last year we saw the elimination of foreign language in the elementary program and German and Latin in the middle school. Now we see that there is discussion of eliminating string lessons in the third grade or possibly eliminating elementary and middle school music lessons.

Another couple of budget strategies in discussion — (1) the demotion of professional staff for economic reasons and (2) increasing class size to help the 2012-13 budget. Here’s a question — wonder if there is any research to suggest that increasing class size could result in lower PSSA exam results for TESD.