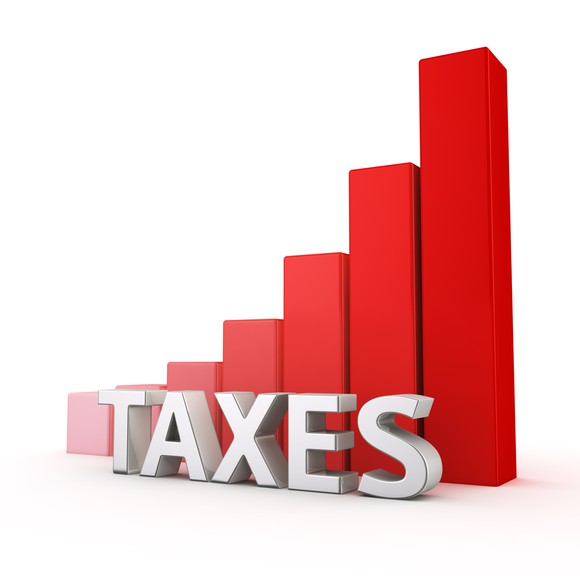 Last week I was contacted by Laura McCrystal, a writer with the Philadelphia Inquirer asking about TESD’s recently approved tax increase of 3.9%. Although she was very aware of our District’s ongoing saga over the $1.2 million accounting error, Laura was clear that the article she was working on was specific to greater Philadelphia area school districts and a comparative analysis of school taxes.

The Philadelphia Inquirer published its article, “How much are your school taxes increasing? Here’s a district-by-district look at the Philly region” which is a fascinating read — and analysis of tax increases in the region. Although the T/E School District generally like to come in at first place, on the tax increase list we tied for second highest increase! Yes, our District received the distinction of the second highest tax increase (3.9%) in the greater Philadelphia region – second only to Morrisville School District in Bucks County with a 6.7% tax increase. (If you recall, the T/E School Board had originally passed the proposed final budget (5-4 vote) in late April with a 6% tax increase which was later reduced to 3.9% in June.). Below shows the highest tax increase school districts: 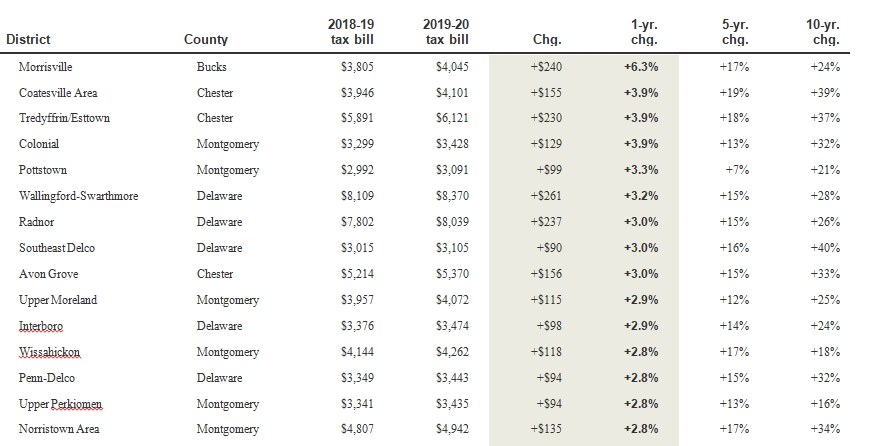 The T/E School Board meeting on Thursday night was rather anticlimactic. Most of us who have been following the budget process were not surprised by the 3.3% tax increase (1.7% Act 1 Index, 1.6% referendum exceptions) for the 2012-13 school year. Based on the District’s average residential assessment of $252,601, this translates to an average increase of $155 per homeowner in their tax bill.

Following the final budget summary, discussion and resident commentary, the school board members were presented the opportunity to weigh-in on why they were voted for or against the 2012-13 budget. The 2012-13 budget passed 7-2 with school board members Liz Mercogliano and Rich Brake providing the dissenting votes. Brake provided a lengthy 30-minute oration, which offered historical details of what brings the District to this point and his reasoning for voting against the 2012-13 budget.

Ray Clarke also attended the school board meeting and offers his thoughts on last night’s School Board meeting. Thanks Ray!

1. Karen Cruickshank reported that the tone in the TEEA negotiations is “increasingly positive”. One small signal of this is the memorandum of understanding that removes the requirement for the district to pay for “advanced studies assistance”, in return for dropping the demotion idea for 2012/13. Amazingly, this saves $360,000 – and it’s not even all the tuition that is paid! (Payments are continuing for those on the lowest Bachelors steps).

2. The General Fund Balance debacle continues. At its root is the fact that the Board treats this as a completely discretionary slush fund, with absolutely no rules about how it is to be used. I believe that it is completely unacceptable for $30 million of taxpayer money be be treated so cavalierly. Just one example: last year the “commitment” for PSERS “stabilization” was $15.4 million, this year it’s $3.6 million. It’s not that the difference has been used to stabilize PSERS, it’s just that the number is a plug for when other things have been accounted for. Ridiculous. Why even have that item in the first place – we plan to raise taxes for it anyway.

Having said that, the changes in this year’s commitments do move us in the right direction. $10.4 million will be moved into the Capital Fund, where it will be used for the one time expenses that we’ve discussed here are the appropriate uses for the Fund Balance.

Also worthy of mention is the commitment for the liability for vested employee services. This went up by $0.8 million. The actual payment was $0.3 million; It’s interesting that the actual employment expense was therefore $0.5 million higher than was recognized in the operating statement, another problem deferred for future taxpayers.

3. Which gets me to Dr Brake. He treated us to a half hour analysis of the school district’s finances and the changes over the last decade or so, with desktop slides. I encourage all to look for the video. He voted against the tax increase, and argued for “an entirely new status quo” for the school employees. Here are some notes I took with my commentary:

– The drop in revenues from assessment appeals offsets the increase from increasing the tax rate for the exceptions. He used this to suggest we have reached taxing capacity.

– Special education is a “ticking time bomb” and the increased costs of autism “threaten public education”. Relatedly, we heard in the Policy Committee how parents of non-residents, shopping for schools, want the right to come into classrooms to observe TE”s special education programs.

– All entities (governments/households, US/Europe, etc) have a “pathological addiction to spending beyond our means”. [An OT comment: In a long run he’s right that this is unsustainable, but in the short run, national governments able to determine monetary policy can have a stabilizing role when consumers all of a sudden come to that unsustainable realization. The problem in the US is that the political actors cannot agree on the long run plan to get the house in order, and in Europe, they have a completely crazy monetary union without a fiscal union].

– For TE routinely taxing to the max is unsustainable and not the solution. I note that the agreed 3.3% tax increase this year, and the subsequent annual 3% increases in the 4 year projection model accumulate to an increased tax bill of $600 per year for the average residential assessment. And there’s still a $4 million deficit in 2016/16.

– He is now going to pay more attention to the Fund Balance. Good!

Pittsburgh Business Times has compiled the statewide rankings of PSSA (Pennsylvania System of School Assessment Exams) test performance for the last six years. The PSSA results come from the Pennsylvania Department of Education website. Raw results can be found at www.pde.state.pa.us — click on ‘Data and Statistics, then ‘PSSA’. The survey ranks the 500 school districts in the state based on the PSSA performance. The rankings do not denote the overall quality and performance of the school district, only the PSSA scores.

Once again, for the sixth straight year, the Upper St. Clair School District in Allegany County (Pittsburgh suburbs) held on to its top spot as highest-scoring school district in Pennsylvania on state standardized tests.

There is good news for T/E School District – for the second year in a row, TESD landed No. 2 on the list of highest-scoring PSSA school districts. In the Philadelphia regions, in addition to TESD, four other school districts are in the top 10 in terms of performance. Here are those results:

Looking at the bottom of the performance list, I was curious to see if any Philadelphia region school districts were on the list. Interesting to note the following: