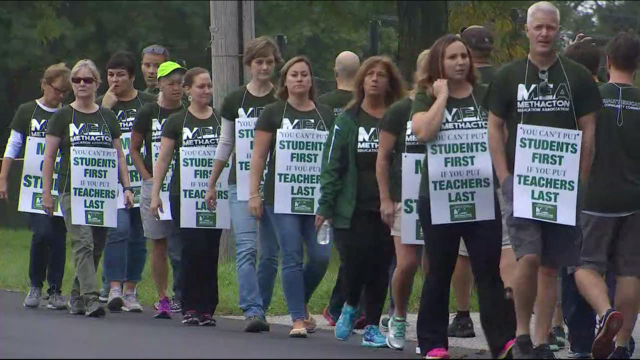 Teachers in the Methacton School District have been working without a contract since January. A stalemate in the bargain process led to the strike Monday by the teachers as authorized by its union, Methacton Education Association (MEA).

There are 5,000 students enrolled in the Methacton School District. The union represents 403 teachers and professional staff.

Issues being negotiated include salary, benefits, class size, teacher-student ratio and team teaching. The talks broke down when the two sides failed to come to an agreement on how much teachers should pay for their health insurance. The teachers argue that their salaries are in the lower range of salaries and the school district is expecting them to pay for health care as if they were in the upper range.

The teachers are using a pay freeze and delayed salary increases in the previous two four-year contracts, as examples of concessions from teachers that allowed the district to improve their finances dramatically and are unwilling to see this happen again.

The MEA released the following statement prior to striking:

The Methacton Education Association (MEA) is disappointed to announce that they were unable to reach an agreement with the School Board after the two sides bargained all afternoon and into the early evening on Sunday to avoid the potential of a work stoppage scheduled to start tomorrow.

The School Board’s position of dramatically increasing the employee’s share of the healthcare premium while not adequately increasing salaries is unacceptable to the Association. MEA was willing to increase premium share by over 23% in 3 years but that was not sufficient to the District.

In the end, MEA had 30 minutes to consider the final proposal of the Board and was more than willing to bargain later than the arbitrary 8PM deadline.

The strike will commence tomorrow at 7:30AM. MEA is willing to bargain with the District throughout the work stoppage.

It is unclear when the teachers will return to the classrooms. Pennsylvania State Department of Education rules will prevent the work stoppage from going past 15 days. A state mediator is now involved to coordinate the exchange of proposals between parties.