The community’s voice of opposition over Catalyst Outdoor Advertising’s proposed digital billboard in Paoli continues to grow louder! After hearing that our Tredyffrin supervisors were considering the digital billboard proposal at the intersection of Rt. 252 and Lancaster Ave (and demolishing the historic Clockworks building) my social media campaign to inform the community went in to full motion. And based on the overwhelming response, you have to believe that the Board of Supervisor Chair Heather Greenberg and her fellow supervisors are getting the message — residents do not want the billboard or the Clockworks building destroyed in the process.

The GoFundMe exceeded its initial goal of $1,000 in less than four days! As a result of the community’s generous contributions, lawn signs to “BAN Digital Billboard in Paoli & Save Historic Clockworks Building” have been designed and ordered and will arrive late next week. Based on the number of people who have asked me for a sign, a second order may be needed. Printed material will also be available starting next week. If you are interested and able to contribute, you can find the GoFundMe link by clicking here. 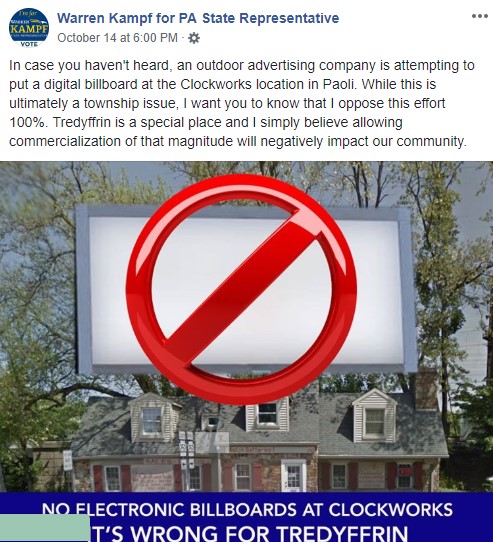 On her Facebook campaign Facebook page, PA State Representative Democrat opponent Melissa Shusterman is also clear in her opposition to the digital billboard under consideration by our township supervisors. 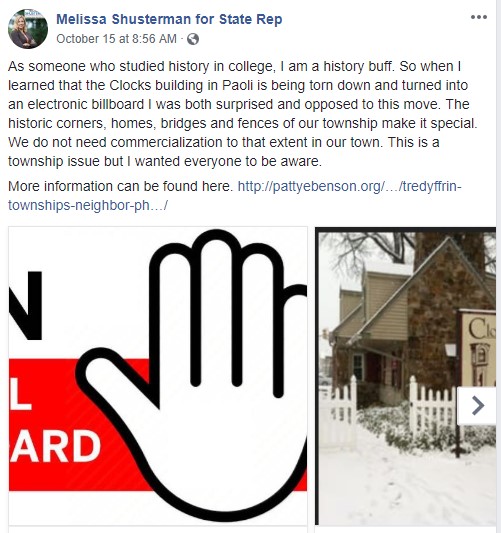 There is an important Special Election on the November 6 ballot — registered voters in Tredyffrin Township will be choosing an at-large supervisor to fill a vacated seat on the Board of Supervisors. Given the current situation with the proposed plans for a digital billboard, lack of historic preservation ordinance and transparency issues, the selection of the new supervisor is extremely important to this community!