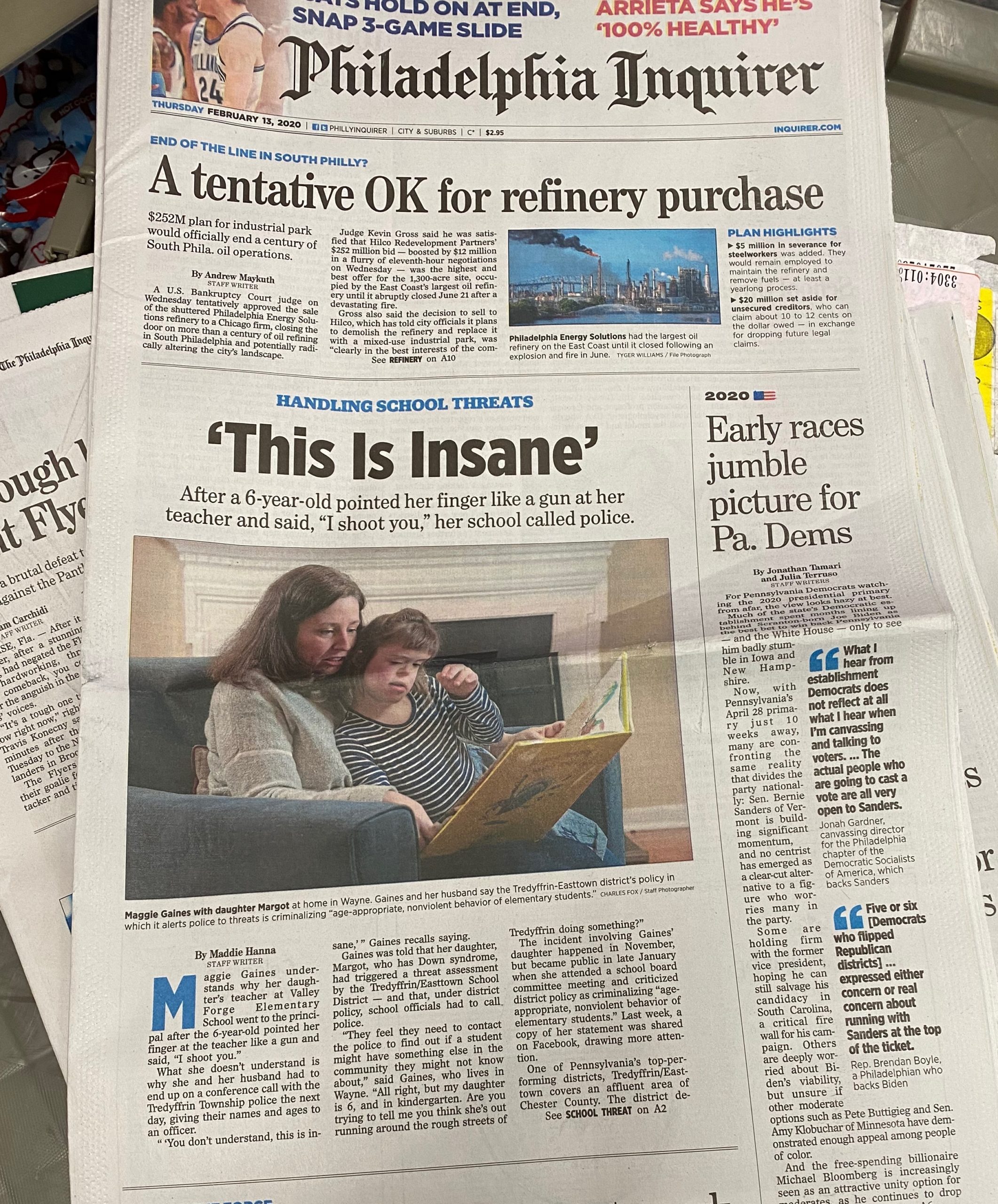 Standing three people deep and overflowing into the lobby, all attended the meeting for the singular purpose to oppose outsourcing of paraprofessionals in the TE School District. For over three hours, one voice after another was echoing the same message to the School Board, “don’t outsource.” For the record, not one person spoke in favor of the District’s proposed outsourcing plan.

With Fox News and ABC Action News filming most of the proceedings,Board members, District business manager Art McDonnell, personnel manager Sue Tiede and Superintendent Dan Waters repeatedly claimed that many of us had misunderstood and that the third-party outsourcing to STS would actually help ‘save’ the jobs of District aides and paras. They wanted us to believe that STS would hire all the displaced TE employees and that our employees would be making more money working for STS.

According to McDonnell, the need for outsourcing is based on the Affordable Care Act (ACA) and the cost to provide healthcare for the aides, paraeducators and substitute teachers working 30 hours or more per week in TESD. These employees have never received healthcare coverage through the District. McDonnell claimed the annual cost to provide healthcare coverage to these currently uninsured District employees would be in excess of $2.3M and further citing a potential fine of $1.2M annually for noncompliance.

By the time the last person had spoken out about outsourcing, it was abundantly clear that the District and the School Board had many more questions than answers. McDonnell had predicated his evaluation of the healthcare coverage costs to the District on all 175 employees needing insurance. As was repeatedly pointed out, most of these employees have insurance through their spouses and do not need the coverage. The District’s cost to insure was based on all 175 employees working 30+ hours per week which had many in the audience asking why not reduce their hours (so the District would not be affected by the requirements of ACA).

Several residents spoke of personal experience with the Affordable Care Act and its requirements. One in particular, a CFO for a local corporation, offered that the District’s analysis was incomplete and inaccurate, and suggested the Board seek healthcare benefit expertise so as to make an informed decision. Example of inadequate District analysis — The Affordable Care Act does not stipulate that the healthcare coverage must be the same as offered to the teachers and administrators. Rather than plugging in the cost for a ‘basic’ healthcare coverage in their outsourcing analysis, the McDonnell used the cost of the Cadillac-type of healthcare coverage of the administrators.

The most striking comments of the evening were from those who had called the proposed outsourcing company, STS to learn about the company and their employment requirements. They were told that STS employees only need graduate from high school, or a GED will suffice. (Remember all the aides, paras and substitute teachers working in TE have 4-year degrees and many have Master degrees). When asked if any additional training was needed to serve as a school district paraprofessional, the response from the company HR — was one evening of their STS Academy training (!). One young woman in the audience spoke last night who works for TESD but is also a STS employee. She explained STS hiring procedure and the shocking revelation that STS hired her with no interview required.

Personnel director Sue Tiede repeatedly countered the low employment standard of STS that should District use this company, they would be required to meet the TESD requirements. We also learned that STS has no experience with this type of job outsourcing. Although McDonnell and Tiede offered that a couple of Lancaster County school districts employ STS, we learned quickly from audience members that these contracts were only recently signed … therefore leading to the speculation that our award-winning school district would serve as the company’s outsourcing guinea pig.

Facing many unanswered questions from audience members and an outsourcing analysis that did not stand up to public scrutiny, at 11:20 PM, the School Board voted unanimously to table the discussion of outsourcing for the night. By the Finance Committee meeting on June 10, the administration and the Board will seek a better understanding of the Affordable Care Act (and its requirements) plus work to answer the many questions and possible solutions offered by the public last night.

Tomorrow will mark our nation’s 234th birthday, . . . here’s an interesting question: Would our founding fathers be happy? To answer the question, Opinion Dynamics Corp. conducted a national telephone poll for Fox News among 900 registered voters from June 29 to June 30. For the total sample, the poll has a margin of sampling error of plus or minus 3 percentage points. Here’s the interesting results —

It’s not easy to find something Americans can largely agree on these days, but as the Fourth of July holiday approaches a new poll finds at least a few things: 1) the nation’s Founders would be unhappy with the country today; 2) “God Bless America” is a favorite patriotic tune; and 3) the Pledge of Allegiance is a good way to start the school day.

There is some variation along partisan lines, as 22 percent of Democrats believe the Founders would be proud of America in 2010, while only 8 percent of Republicans feel the same way.

Nonetheless, Americans like to sing their country’s praises when they can. Given a choice of four popular patriotic songs, the largest number of American voters (41 percent) picks “God Bless America” as their favorite.

Independents also trend toward the top two song choices, but are more likely to say they like all the songs equally (12 percent). There is also a considerable amount of unanimity among voters of every political stripe on students starting the school day with the Pledge of Allegiance.

Overall support for reciting the pledge stands at 87 percent, and Republicans (96 percent) and independents (83 percent) and Democrats (82 percent) all express high degrees of support.